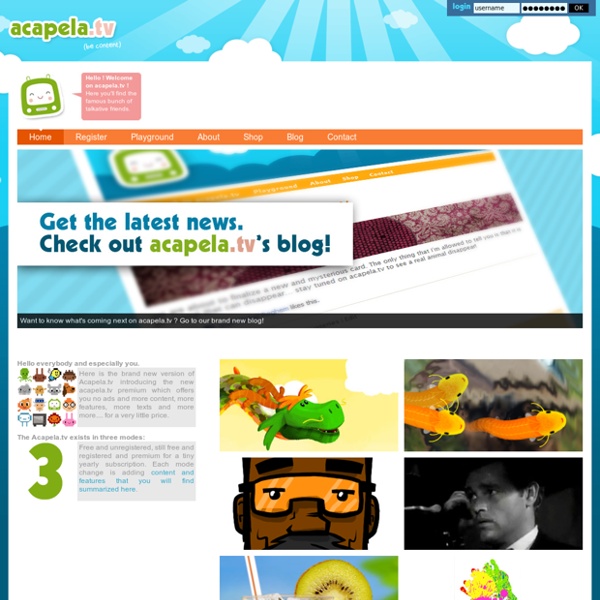 Douanier Rousseau Create an imaginary landscape with NGAkids JUNGLE. Mix and match the animals, control the weather and lighting conditions, or construct flowers, trees, and plants. An "AUTO" button generates random compositions, so you can sample program options and experiment with special effects as a starting point for your own designs. This Shockwave interactive is intended for children of all ages. To begin, just click one of the menu pictures above. Tux Paint Tux Paint is a free, award-winning drawing program for children ages 3 to 12 (for example, preschool and K-6). Tux Paint is used in schools around the world as a computer literacy drawing activity. It combines an easy-to-use interface, fun sound effects, and an encouraging cartoon mascot who guides children as they use the program.

Nitro PDF Reader 2.1 released, promises better PDF creation from Softwarecrew San Francisco-based Nitro PDF has released version 2.1 of its freeware PDF viewing and creation tool. Nitro PDF Reader 2.1, which is also available as a separate 64-bit build is a feature-rich PDF viewer with built-in PDF creation functionality, including the ability to directly convert over 300 document formats to PDF if the document’s parent application is installed. Version 2.1 introduces a number of notable new features, including a new 64-bit build of Thumbnail Preview, the standalone tool that generate navigable thumbnail previews of PDFs in Windows Explorer, that works in 64-bit versions of Windows 7 and Vista. Previously the tool only work in 32-bit versions of Windows. The PDF creation engine, Nitro PDF Creator, has also been overhauled to deliver “significant improvements” in both performance and robustness, while also delivering smaller PDF files than previously. In addition to these new features, Nitro PDF Reader 2.1 also features over 85 individual bug fixes.

Wharol First time here? Welcome! We have a lot of fun stuff to play with like ourMotivational Poster maker, Magazine Cover maker, Pop Art poster, and much more! Play as much as you like—everything is free. English language learning games ESL/English learning games on Digital Dialects are completely free to use, do not require registration, and are designed for ESL students of all ages. Each ESL revision topic includes vocabulary lists and practice games with audio for teaching correct pronunciation. Materials are of use to beginner level English as a second or other language students, though those with some familiarity with the language may wish to try the English/ESL spelling games. Games for English as a second language include: Numbers in English - learn the English numbers from 1-12, 13-20 and 0-100.

Dutch Book From 1692 Documents Every Color Under the Sun: A Pre-Pantone Guide to Colors In 1963, the Pantone corporation began publishing a bi-yearly color guide, which divides and categorizes every color under the sun. The astonishingly ubiquitous guide is an essential tool for designers of every stripe, from a fashion guru figuring out what color to highlight in her fall line to the guy in charge of creating a color palette for the interior of a new Boeing-787. Twice a year, Pantone, along with a shadowy cabal of colorists from around the world, meet in a European city and, with the secrecy of the Vatican choosing a new pope, they select the color of the season. They are the reason why you painted your kitchen Wasabi Green a couple years ago and why, whether you want to or not, you’ll be wearing Radiant Orchid next year. Slate did a great write up about the whole confusing process a while back. Over 250 years before the Color-Industrial Complex reared its head, a mysterious Dutch artist also detailed every color in the spectrum, only he did it all by hand.

Ten incredibly useful browser add-ons for journalists Browser extensions for Google Chrome, add-ons for Firefox and Safari extensions can be very powerful and incredibly useful to journalists. Here is a list of some that can help you find and search, verify sources and speed up picture annotation. Some of the extensions in this list are our tips and the rest are suggestions submitted to us after we sent out a tweet asking for nominations. 1. HoverMe (Chrome) Verifying Twitter sources can be testing.