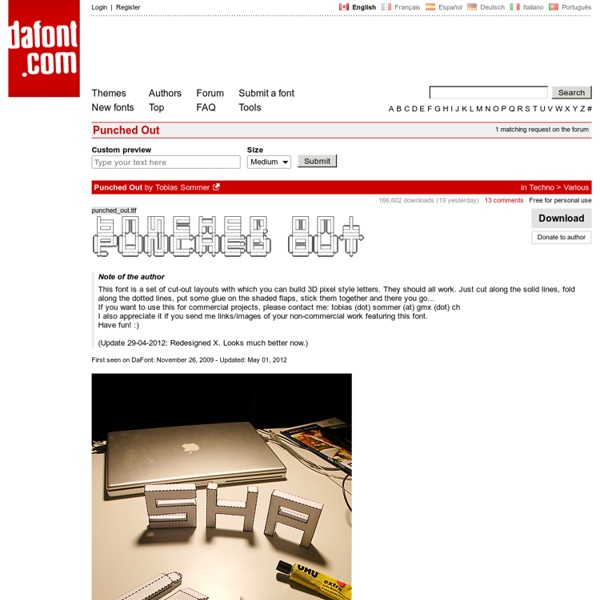 This font is a set of cut-out layouts with which you can build 3D pixel style letters. They should all work. Just cut along the solid lines, fold along the dotted lines, put some glue on the shaded flaps, stick them together and there you go... If you want to use this for commercial projects, please contact me: tobias (dot) sommer (at) gmx (dot) ch I also appreciate it if you send me links/images of your non-commercial work featuring this font. Have fun! :)

Craft DIY Projects, Patterns, How-tos, Fashion, Recipes @ Craftzine.com - Felting, Sewing, Knitting, Crocheting, Home & More Quilling, the coiling and shaping of narrow paper strips to create a design, has been around for years — hundreds, in fact. During the Renaissance, nuns and monks would roll gold-gilded paper remnants trimmed during the bookmaking process, and use them to decorate religious objects as an alternative to costly gold filigree. Quilling later became a pastime of 18th and 19th century young ladies in England, who would decorate tea caddies and pieces of furniture with paper filigree. The practice crossed the Atlantic with colonists, who added quilling to candle sconces and trays as home decorations. The Destruction of the World Trade Center: Why the Official Account of 911 Cannot Be True Global Research Editor’s NoteAs September approaches, we are reminded that the anniversary of the tragic events of 9/11 will soon be upon us once again. 11 years laters, are we any closer to the truth about what really happened on that fateful day? For the next month until September 11, 2012, we will be posting on a daily basis important articles from our early archives pertaining to the tragic events of 9/11. “The official theory about the Twin Towers is that they collapsed because of the combined effect of the impact of the airplanes and the resulting fire. The following text by Professor David Ray Griffin originally published on Global Research in January 2006 forecefully refutes the official narrative.

papier-mache easter eggs For Easter I made papier-mache polka dotted eggs. I created them using small water balloons and tissue paper then I filled them with candy and toys and sealed them shut. The egg can hold a surprising amount of candy and the tissue paper seems delicate making for a delightfully heavy and yet fragile object, much like real egg. The 101 Most Useful Websites on the Internet Here are the most useful websites on the Internet that will make you smarter, increase productivity and help you learn new skills. These incredibly useful websites solve at least one problem really well. And they all have cool URLs that are easy to memorize thus saving you a trip to Google.

you knew i was going to make one. they are all over pinterest....(i still am not signed up for pinterest because i don't have time for one more thing but browsing is fun!) so we made one. i took a box of 64 crayons and took out the blacks and browns.i used another small box and doubled up on the good colors i liked and hot glued them to the top of our canvas. then we turned our blow dryer to hot on high. How to cut glass I posted a picture about 1 week ago on Instagram, Facebook and Twitter of me cutting glass using just string. I got LOT’S of requests for a tutorial on how I DID THIS! So here it is. FINALLY!

WebGL Water Loading... Made by Evan Wallace This demo requires a decent graphics card and up-to-date drivers. Containers of Hope, a $40,000 Home by Benjamin Garcia Saxe By Eric • Jun 16, 2011 • Selected Work Benjamin Garcia Saxe has recently completed the Containers of Hope project with a budget of $40,000. Located in San Jose, Costa Rica this container house is the result of a close collaboration between the architect and his clients, who went on to construct the building themselves. The 1,000 square foot home is composed of two 40-foot used shipping containers set together with a raised mid section and clerestory windows. More shipping container houses here

Print - 110 Predictions For the Next 110 Years · People will be fluent in every language. With DARPA and Google racing to perfect instant translation, it won't be long until your cellphone speaks Swahili on your behalf. · Software will predict traffic jams before they occur. Using archived data, roadside sensors, and GPS, IBM has come up with a modeling program that anticipates bumper-to-bumper congestion a full hour before it begins. 20 Inventive Ways to Upcycle Shipping Pallets by Ian Rebello repurposing, diy By Inthralld on Aug 19, 2012 Shipping pallets have become a bit more popular with the quest for sustainable elements and materials in one’s home. With the popularity of Green Design and creative prototypes floating around out there, there are some great d.i.y. opportunities for things that can be found locally– like pallets.

100 Websites To See Before You Die (Part 1) - Page 2 Shape the Hive What are humans, really, but so many bees, buzzing away? That’s the question (we think) asked by Shape The Hive, a visual “experiment in digital collaboration.” In more concrete terms, Shape The Hive is a massive, color-coded hex grid, where anyone can use a sort of virtual kaleidoscope to fill in hexes with distorted images or videos. It’s fun to have a look around, and easy if you’re inclined to participate, so have a look. Get The Glass

EL Wire EL Wire, also known as Electroluminescent wire, is a stiff wire core coated with phosphor and then covered with a protective PVC sheath. When an AC signal is applied to it, it glows an aqua (blue green) color. Sometimes its covered with a colored plastic shell to make it appear another color.

Unusual Night in Nature Two French hotel/camp, Attrape Reves in Bouches-du-Rhone (near Marseille) and Sky River near Loir-et-Cher, are the places where you can sleep under the stars. Concept of sleeping in balloons are designed by French designer Pierre Stefan, wanting to create an environmentally friendly space: when a plastic bubble pack, the area remains almost intact. Balloons are small and cozy, their diameter is about four meters. Some are completely transparent, while others provide a little more privacy. Of course, if you want comfort that provides, for example, “Ric”, these unusual balloons are probably not for you.