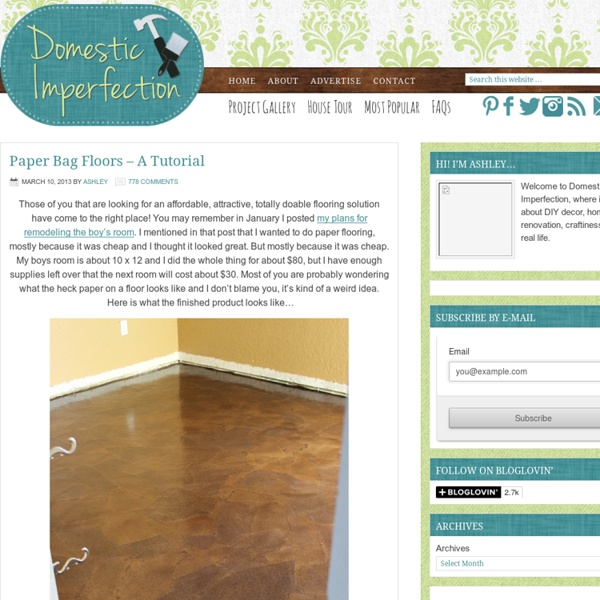 I did this project in my home (over concrete, no stain) and I am BEEEEEEEE-YOND excited with the outcome. I can’t say THANK YOU enough to all of the people before me who did this and took the time to share what they learned. They were my supporters and encouragers and didn’t even know it. This has changed my whole outlook on my home, and yeah…carpet! If you ever have to pull up your own carpet, you’ll never put down more again. I join Jami on that carpet soap-box. Where to begin?

Crowds Sing John Lennon's 'Imagine' in Brussels Following Attacks - Inside Edition Hundreds of people gathered on the streets of Brussels in an act of solidarity to condemn the terror attacks that happened at the city’s airport earlier in the day by singing John Lennon’s “Imagine.” Read: Adele Condemns Brussels Attackers: 'We're Better Than Them F***ers' The attacks, which killed 30 and wounded over 200, brought the city to a standstill. As the sunset on Tuesday to bring the dark day to a close, citizens gathered in the streets to light candles and sing Lennon’s hit. How to Make a Battery-Powered, Gadget-Charging Go Bag DIY Instructions for Low-Cost Flooring - Yankee Magazine Photo/Art by Andrew Wellman Photo/Art by Andrew Wellman Homeowners Gwynne Gardner and Michael Seitz. Photo/Art by Andrew Wellman A stool top finished in the same technique, using paper scraps in a variety of earth tones. Directions for Paper Bag Stool Project

Berkley The Bear Cub Loves To Play In Puddles, Flowers At Discovery Wildlife Park Ah, to be young again. Berkley the bear cub, who calls Innisfail, Alta.'s Discovery Wildlife Park home, is clearly making the most of her childhood if recent videos taken by park staff are any indication. A video released on the park's Facebook page last week shows the adorable baby dancing and splashing in a fresh mud puddle. ruby bloom: Brown paper bag floor over concrete subfloor Step 1: Rip up the carpet. I just started pulling it up at a corner and rolling up the carpet and pad as I went. I later realized that cutting it into sections first would have been easier. I ripped up the carpet without really knowing what I was doing. I hadn't even bought any supplies yet and my husband was out of town for 6 days, which left me at home with my 1, 6 and 8 year olds.

huffingtonpost 4 You With Love: Concrete Floor + Paper Bags + Polyurethane + RIT Dye = Another Fabulous Floor Isn't the web an amazing place for inspiration? One of the blogs I follow is Lovely Crafty Home. Rachael shares tons of great ideas on how she makes her home truly beautiful. It was her Ultimate Brown Paper Bag Flooring Guide that inspired me to create this awesome floor in my woman cave.

Lily the Black Bear - Journal Uniquely Grace: Paper Bag Flooring - DIY on Concrete Subfloor Tutorial Who would decoupage paper bags to their bathroom floor and then spritz shimmer mist all over it? THIS girl that's who! Check out these before and after shots. This first one the before was the day we signed the contract to purchase this house... Cents and Sensibility: How to Make a Penny Floor With two little ones running around the house, I am always picking things up off the floor. I am amazed, though, by the sheer number of coins! Granted, we play “store” a lot, which involves a cash register, spare change, and my youngest setting up “shop” where ever I am… no matter what I’m doing, working or not! They have piggy banks that they love to fill, so why are the coins spread cavalierly on the floor? I tell myself it’s good for me – like exercise – and picking them up is the equivalent of toe touches, but not even an Army Drill Sargent would put someone through this ;-) Now my thought process is that I’m just going to start cementing them down, so I will eventually end up with these floors: (via Portland Press Herald)

Bella Nest: Out of the Ordinary Nook Wall Hello, Friends! Today I'd like to share with you a grand, diy project recently completed in the home of Scott and Jessi Locke. It was Scott's idea to transform this simple, breakfast nook wall... into this... It all started with mdf (according to Wikipedia is denser than plywood. It is made up of separated fibres, but can be used as a building material similar in application to plywood. Polished Concrete & Decorative Concrete Range - Boral Are you building or renovating the ultimate Aussie dream home? Boral has the building materials to complement the very best in cutting edge Australian architectural design. Concrete is no longer a basic construction material.