When there are grapes in the salad all... - Northern Lights Wildlife Society. Royalty Jewelry and Fashion Group Public Group. NTD News - Farewell Visit To Chimpanzee. BBC Comedy - A Message From Women Everywhere - The Mash Report. … "God said, I need someone strong enough to pull sleds and find bombs, yet gentle enough to love a baby... So God, made a dog."… #K9Lor is all clean and relaxing. 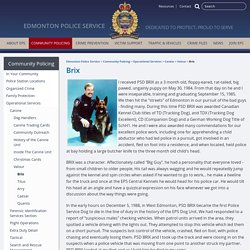 From that day on he and I were inseparable, training and graduating September 15, 1985. We then hit the "streets" of Edmonton in our pursuit of the bad guys - finding many. During this time PSD BRIX was awarded Canadian Kennel Club titles of TD (Tracking Dog), and TDX (Tracking Dog Excellent), CD (Companion Dog) and a German Working Dog Title of SchH1. He and I were also awarded many commendations for our excellent police work, including one for apprehending a child abductor who had led police in a pursuit, got involved in an accident, fled on foot into a residence, and when located, held police at bay holding a large butcher knife to the three month old child's head.

BRIX was a character. In the early hours on December 5, 1988, in West Edmonton, PSD BRIX became the first Police Service Dog to die in the line of duty in the history of the EPS Dog Unit. By Cst. Meet Luke, a former RCMP dog, who is living his best life in retirement. Retiring is a monumental shift in lifestyle that catches some off guard, requiring an adjustment period. 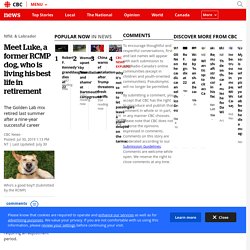 That is not the case for Luke. The Golden Lab mix, who was a former stray, is marking one year since he retired from his successful career with the RCMP as a drug-detection dog and was adopted by a local RCMP family. To put it simply, Luke is living his best life. Luke's days now consist of belly rubs, long walks in the woods, swimming and treats. All of that would make anyone, and any dog, exhausted, so Luke also enjoys his fair share of naps. The RCMP shared a glimpse into Luke's post-retirement life, and thanked him again for his service. During his nine-year police career, Luke sniffed out over $5 million in drugs and cash. Luke came a long way from when he lived on the streets of St. First wild born black-footed ferrets kits born on Canadian soil. 5 CASES WHERE WILD ANIMALS SAVED HUMANS. Grieving dolphin gives me her dead baby by Scarlet Colley wow seems so long ago now. Man Sets Up Camera To See What His Cat Does While He's Sleeping And It’s Hilarious. Happy National Raspberry Cake Day. □... - I Love Celebrating.

Happy National Raspberry Cake Day. □... - I Love Celebrating. Awesome Items Whose Inventors Should Get A Nobel Prize. Three Mountain lions walk up to our front door. Princess Charlotte is known for her sneaky waves and smiles at the camera - and yesterday as she ran around her Mother's Chelsea flower show creation it was no different. 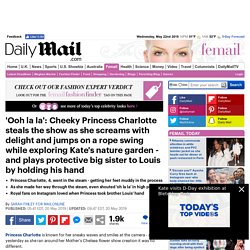 Princess Charlotte, 4, stole the show as she jumped on the swing, took her shoes off to go in the steam - getting her feet muddy in the process and also said no to playing with brother George. Prince George, Princess Charlotte and Prince Louis had a whale of a time during the sneak peek of Kate's stunning garden at the Royal Horticultural Society's Chelsea Flower Show. However it was Charlotte who seemed to have the best time and at one point, as she made her way through the steam, even shouted 'oh la la' in a high pitched voice. Princess Charlotte steals the show AGAIN as she explores Kate's garden. Holly and Tasha - Play Date - May 15, 2019. Bliss & Joy - Seriously one of the best photos ever...... Jeanne Roup. Facebook. Facebook. Violeta Davinci - ~ □CoNgRaTs□ ~ This is the best thing I've seen in at least 6 or 7 minutes - probably catnip prices or some shit. Incredible Triple Humpback Breach In Nova Scotia Stuns Whale Watchers.

On January 22, 2010, Lily gave birth to Hope and began showing us how black bears live. 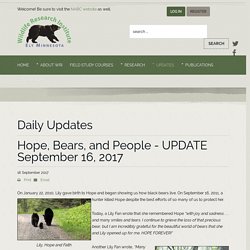 On September 16, 2011, a hunter killed Hope despite the best efforts of so many of us to protect her. Lily, Hope and Faith Today, a Lily Fan wrote that she remembered Hope “with joy and sadness . . . and many smiles and tears. I continue to grieve the loss of that precious bear, but I am incredibly grateful for the beautiful world of bears that she and Lily opened up for me. HOPE FOREVER!” Hope not wanting to be collared - 8/16/11 by Jackie RunionsAnother Lily Fan wrote, “Many dreams were broken into pieces today six years ago. Back at that time, Olatz from Spain put together this nice tribute to Hope Hope brought together so many of us and changed countless minds about bears around the world.