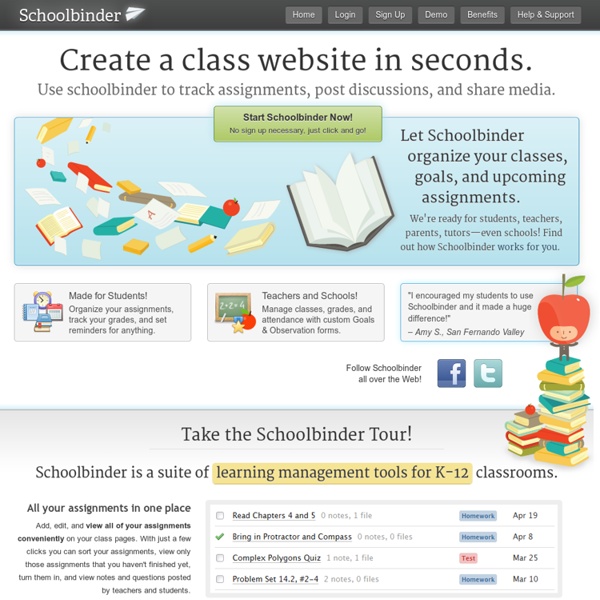 8 math talks to blow your mind Mathematics gets down to work in these talks, breathing life and logic into everyday problems. Prepare for math puzzlers both solved and unsolvable, and even some still waiting for solutions. Ron Eglash: The fractals at the heart of African designs When Ron Eglash first saw an aerial photo of an African village, he couldn’t rest until he knew — were the fractals in the layout of the village a coincidence, or were the forces of mathematics and culture colliding in unexpected ways? Here, he tells of his travels around the continent in search of an answer. How big is infinity? There are more whole numbers than there are even numbers … right? Arthur Benjamin does “Mathemagic” A whole team of calculators is no match for Arthur Benjamin, as he does astounding mental math in the blink of an eye. Scott Rickard: The beautiful math behind the ugliest music What makes a piece of music beautiful?

Introducing the TED All-Stars: 50+ classic speakers TED2014 will bring together more than 70 speakers with fresh thinking on topics as diverse as leadership, genetics and the magic of fireflies. But this is our 30th anniversary conference, and it’s also time to look back at some of the incredible ideas surfaced in the past. At TED2014, we will hold five All-Stars sessions that bring 50+ favorite TED speakers back to the stage. To create this powerhouse speaker lineup, we reached out to the TED community and asked: who do you want to see return to TED2014? From there, we invited speakers to appear in these special sessions. Session 1, “Planet Dearth,” hosted by Kathryn Schulz Session 2, “Beauty and the Brain,” hosted by Guy Raz Session 3, “Where are We Now? Session 4, “I Heart Design,” hosted by Chee Pearlman. Session 5, “The Future is Ours,” hosted by Helen Walters Want to hear these speakers live? Starting March 17, follow TED2014 on the TED Blog »

The Five Greatest TED Talks of All Time by Maria Popova Democratizing knowledge, the meaning of life, and why everything we know about creativity is wrong. Today marks the fifth anniversary of TED talks becoming available to the world. As of this week, there are 1000 TED talks online in 81 languages, and they’ve been seen a cumulative half billion times. I can’t overstate how much TED has changed my life personally, and what a tour de force it has been culturally. Some time ago, I channeled my love for TED in a remix project called TEDify, collaging and animating soundbites from TED talks into narratives along different themes. Today, to celebrate the big occasion, I’ve tried to curate my five favorite TED talks of all time — operative word being “tried,” since it felt a bit like asking a parent to pick out her favorite child. When Elizabeth Gilbert took the TED stage in 2009, it didn’t take long to realize her talk would be among TED’s finest. Don’t be daunted. That is our poetry. That is how innovation happens. Share on Tumblr

The Fermi Paradox - Wait But Why PDF: We made a fancy PDF of this post for printing and offline viewing. Buy it here. (Or see a preview.) Everyone feels something when they’re in a really good starry place on a really good starry night and they look up and see this: Some people stick with the traditional, feeling struck by the epic beauty or blown away by the insane scale of the universe. Physicist Enrico Fermi felt something too—”Where is everybody?” A really starry sky seems vast—but all we’re looking at is our very local neighborhood. Galaxy image: Nick Risinger When confronted with the topic of stars and galaxies, a question that tantalizes most humans is, “Is there other intelligent life out there?” As many stars as there are in our galaxy (100 – 400 billion), there are roughly an equal number of galaxies in the observable universe—so for every star in the colossal Milky Way, there’s a whole galaxy out there. So there are 100 Earth-like planets for every grain of sand in the world. But it hasn’t. Where is everybody?

Physicists Discover Geometry Underlying Particle Physics Physicists have discovered a jewel-like geometric object that dramatically simplifies calculations of particle interactions and challenges the notion that space and time are fundamental components of reality. “This is completely new and very much simpler than anything that has been done before,” said Andrew Hodges, a mathematical physicist at Oxford University who has been following the work. The revelation that particle interactions, the most basic events in nature, may be consequences of geometry significantly advances a decades-long effort to reformulate quantum field theory, the body of laws describing elementary particles and their interactions. “The degree of efficiency is mind-boggling,” said Jacob Bourjaily, a theoretical physicist at Harvard University and one of the researchers who developed the new idea. Locality is the notion that particles can interact only from adjoining positions in space and time. The amplituhedron itself does not describe gravity. Clunky Machinery

How To Identify That Light In The Sky? What is that light in the sky? Perhaps one of humanity’s more common questions, an answer may result from a few quick observations. For example — is it moving or blinking? If so, and if you live near a city,the answer is typically an airplane, since planes are so numerous and so few stars and satellites are bright enough to be seen over the din of artificial city lights. If not, and if you live far from a city, that bright light is likely a planet such as Venus or Mars – the former of which is constrained to appear near the horizon just before dawn or after dusk.Sometimes the low apparent motion of a distant airplane near the horizon makes it hard to tell from a bright planet, but even this can usually be discerned by the plane’s motion over a few minutes. SEE ALSO: Night on Earth: biggest cities without power Still unsure?

Time Machines and Event Horizons » Undivided Looking I've written a pop-article about Time Machines and Event Horizons, which has appeared on the Scientific American blog Critical Opalescence. George Musser, my host, is an editor at Scientific American, and kindly gave me this opportunity to talk about some of my ideas in my article, The Generalized Second Law implies a Quantum Singularity Theorem. If you have any questions about the physics in the article, please feel free to leave comments on this post here. I am a postdoctoral researcher studying quantum gravity and black hole thermodynamics at the Institute for Advanced Study in Princeton.

The Beginning of the Universe and the Limit of Knowledge “Despite its name, the big bang theory is not really a theory of a bang at all. It is really only a theory of the aftermath of a bang.” -Alan Guth So you finally understand it. The Big Bang tells us that the Universe was hotter, denser, and expanding at a faster rate in the past. Image credit: original source unknown. The farther back we go, the closer together everything was, the higher in temperature (and shorter in wavelength) all the radiation was, and — of course — the younger the Universe was. Image credit: Ned Wright (possibly Will Kinney, too), via At some point, it was hot enough that neutral atoms couldn’t even form; as soon as an electron would find an atomic nucleus, a high-enough-energy photon would come along and ionize the atom’s constituents. Image credit: Lawrence Berkeley National Laboratory. Image credit: Ned Wright. Inflation is a period of time where the Universe was expanding exponentially. Image credit: Cosmic Inflation by Don Dixon.