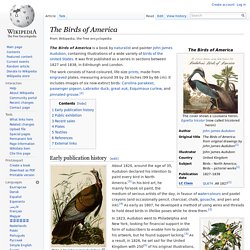 It was first published as a series in sections between 1827 and 1838, in Edinburgh and London. The work consists of hand-coloured, life-size prints, made from engraved plates, measuring around 39 by 26 inches (99 by 66 cm). It includes images of six now-extinct birds: Carolina parakeet, passenger pigeon, Labrador duck, great auk, Esquimaux curlew, and pinnated grouse.[2] Early publication history[edit] About 1820, around the age of 35, Audubon declared his intention to paint every bird in North America.[3] In his bird art, he mainly forsook oil paint, the medium of serious artists of the day, in favour of watercolours and pastel crayons (and occasionally pencil, charcoal, chalk, gouache, and pen and ink).[4] As early as 1807, he developed a method of using wires and threads to hold dead birds in lifelike poses while he drew them.[3]

Paris en Pyjamarama. Erik Kwakkel. This 16th Century Book Can Be Read Six Different Ways. Sure, the Amazon Kindle might have dynamic font adjustments, and it can hold thousands of books, but can it do this? 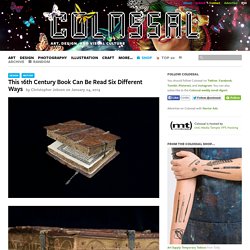 Printed in the late 16th century this small book from the National Library of Sweden is an example of sixfold dos-à-dos binding, where six books are conjoined into a single publication but can be read individually with the help of six perfectly placed clasps. This particular book was printed in Germany and like almost all books at the time is a religious devotional text. The National Library of Sweden has a fantastic photo collection of historical and rare books where you can find many more gems like this, and this, and this. Update: And if you really like amazing old book discoveries, you should be following Erik Kwakkel, the Medieval book historian at Leiden University in the Netherlands, who originally unearthed this story. (via Neatorama) Filigree silver binding: Fore edge. Hide and eek! Histoire du livre. Un article de Wikipédia, l'encyclopédie libre. 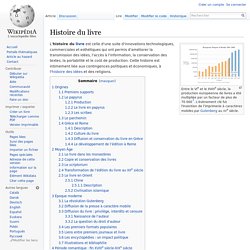 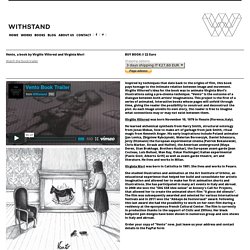 Virgilio Villoresi’s idea for the book was to animate Virginia Mori’s illustrations using a pre-cinema technique. “Vento” is the outcome of a dialogue between both artists’ imaginations. This project is the first of a series of animated, interactive books whose pages will unfold through time, giving the reader the possibility to construct and deconstruct the plot. As each image unveils its own story, the reader is free to imagine what connections may or may not exist between them. Virgilio Villoresi was born November 10, 1979 in Fiesole (Florence,Italy). He learned alchemical synthesis from Harry Smith, structural ontology from Jonas Mekas, how to make art of garbage from Jack Smith, ritual magic from Kenneth Anger.

Virginia Mori was born in Cattolica in 1981. Order your copy of "Vento" now. Peter Blum Gallery. 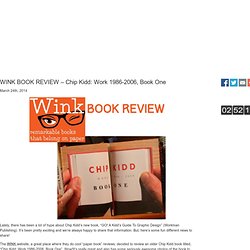 A Kidd’s Guide To Graphic Design” (Workman Publishing). It’s been pretty exciting and we’re always happy to share that information. But, here’s some fun different news to share! The WINK website, a great place where they do cool “paper book” reviews, decided to review an older Chip Kidd book titled, “Chip Kidd: Work 1986-2006, Book One”. Wow! CLICK HERE to check that out! Meet Alison Bechdel and Howard Cruse at a special pre-MoCCA reception hosted by Chip Kidd on April 4th, 2014 from 6:00 to 8:00 PM.

Alison Bechdel is an award-winning cartoonist best known for her long-running comic strip Dykes to Watch Out For. Howard Cruse first became known in the 1970s with his contributions to underground comix publications. This post is an ongoing event where we share news about the SKILLSHARE class being taught by Designer Chip Kidd. Chip Kidd Explains his Process. Art House Co-op.