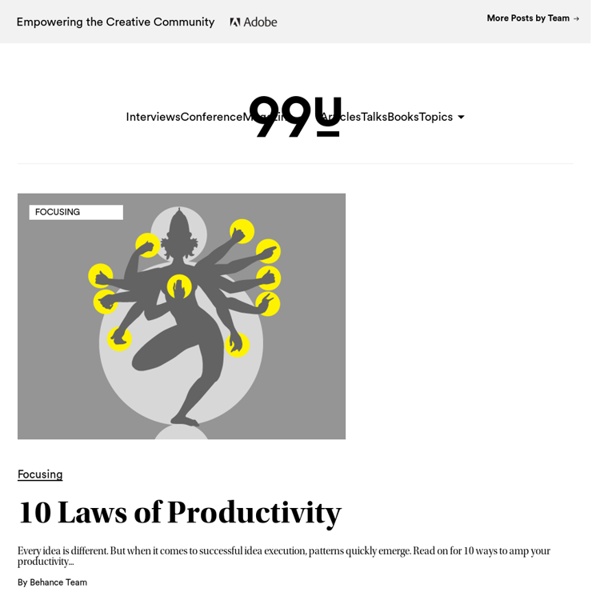 You might think that creatives as diverse as Internet entrepreneur Jack Dorsey, industrial design firm Studio 7.5, and bestselling Japanese novelist Haruki Murakami would have little in common. In fact, the tenets that guide how they – and exceptionally productive creatives across the board – make ideas happen are incredibly similar. Here are 10 laws of productivity we’ve consistently observed among serial idea executors: 1. Break the seal of hesitation. A bias toward action is the most common trait we’ve found across the hundreds of creative professionals and entrepreneurs we’ve interviewed. 2. When our ideas are still in our head, we tend to think big, blue sky concepts. 3. Trial and error is an essential part of any creative’s life. To avoid ‘blue sky paralysis,’ pare your idea down to a small, immediately executable concept. 4. When working on in-depth projects, we generate lots of new ideas along the way. 5. 6. 7. 8. Few activities are more of a productivity drain than meetings. 9.

30-Second Productivity Strategies Half a minute is all it takes to make each day more productive. 1. Take 30 seconds to set the stage for awesome success. Here's how: Before you start doing something, answer the question, "What can I do to make this awesome?" That's basically what Mike Williams of the David Allen Company (the Getting Things Done folks) asked me. When I started to interview him, he stopped me and said, "What would make this call wildly successful for you?" How to Become a Productivity Ninja Believe it or not, productivity can be learned, grasshopper. Yeah, I didn’t believe it either..until I transformed myself into a productivity ninja. Today, I’m going to teach you to maximize your time at your computer, dominate your email in-box, and spend less time on unimportant tasks to focus on what really matters. Once you have freed up your time, you’ll be surprised how you’re able to hang out with friends and family, pick up new skills, spend more time exercising, or cook healthy meals. Like Neo learning Kung Fu, today I shall teach you the skill of productivity. My story

Start Every Day as a Producer, Not a Consumer I have to agree that my most productive days are those where I don't allow myself to read the news, check e-mail, facebook, etc., right after I get up. However, that happens because I've got a ton of stuff to get done, and the outside world takes a back seat until my workload is under control. However, there are certain biological necessities that have to happen before I can be productive. The dog gets let out, I go to the bathroom, I eat/drink something, and *then* I sit down to be productive. I also *have* to check my e-mail, because if something blew up overnight or there's something that needs to be dealt with ASAP, I need to know as early as possible.

Lateral Thinking Problems - Semantics Lateral thinking problems that require you to pay close attention to the exact wording of the problem. 1. A woman gave natural birth to two sons who were born on the same hour of the same day of the same month of the same year. But they were not twins and she had no access to a time machine. How could this be? 600 Reasons Turmeric May Be The World's Most Important Herb There is a medicinal spice so timelessly interwoven with the origins of human culture and metabolism, so thoroughly supported by modern scientific inquiry, as to be unparalleled in its proven value to human health and well-being. Indeed, turmeric turns the entire drug-based medical model on its head. Instead of causing far more side effects than therapeutic ones, as is the case for most patented pharmaceutical medications, turmeric possesses hundreds of potential side benefits, having been empirically demonstrated to positively modulate over 160 different physiological pathways in the mammalian body. While no food or herb is right for everyone, and everything has the potential for unintended, adverse side effects, turmeric is truly unique in its exceptionally high margin of safety vis-à-vis the drugs it has been compared with, e.g. hydrocortisone, ibuprofen, chemotherapy agents. Some of the most amazing demonstrated properties include:

The Brain-Based Secret to Personal Productivity By now, you've probably already broken most of your New Year's resolutions. You're not alone: Only about 8 percent of those who make them keep them. But it may not be that you'll never lose weight or learn a foreign language. 43 Simple Ways To Simplify Your Life Post written by Sherri Kruger. Follow me on Twitter. Simplicity. How can we make things simpler, more streamlined, or more efficient?

7 Qualities of Uber-Productive People Some people get more done than others--a lot more. Sure, they work hard. And they work smart. But they possess other qualities that make a major impact on their performance. They do the work in spite of disapproval or ridicule. A Quick Course in Creativity by Paul McNeese This quick course in creativity is designed to give you a platform to stand on as we look at the various ways you can handle home, social and workplace situations, job-search details and career-path decisions. Let's examine what creativity might look like. Here are some of the ways in which creativity expresses itself. Perhaps the creative idea is one that mixes and matches items or ideas that haven't been combined in just this way before. A wonderful example of this comes from Anita Roddick, who founded the Body Shop, a chain of personal care products and stores.

Health Benefits of Drinking Green Tea Updated October 01, 2014. Every superfood or functional foods list needs a healthy beverage or two, and green tea is usually at the top of the list. Green tea is rich in antioxidants that may offer health benefits and has no calories (unless you add lots of milk and sugar). Green tea frequently makes the cancer-preventing super foods lists due to the anti-cancer effects of green tea and green tea extracts found in laboratory research. 6 Things The Most Productive People Do Every Day Ever feel like you’re just not getting enough done? Know how many days per week you’re actually productive? About 3: People work an average of 45 hours a week; they consider about 17 of those hours to be unproductive (U.S.: 45 hours a week; 16 hours are considered unproductive).