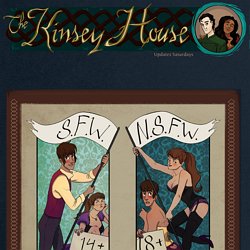 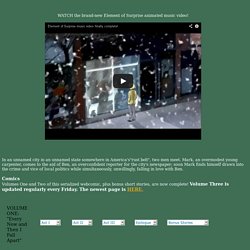 In an unnamed city in an unnamed state somewhere in America's"rust belt", two men meet. Mark, an overmodest young carpenter, comes to the aid of Ben, an overconfident reporter for the city's newspaper; soon Mark finds himself drawn into the crime and vice of local politics while simultaneously, unwillingly, falling in love with Ben. Comics Volumes One and Two of this serialized webcomic, plus bonus short stories, are now complete! Volume Three is updated regularly every Friday. The newest page is HERE. Links. Kyle & Atticus. Hello hello everyone, how are you? 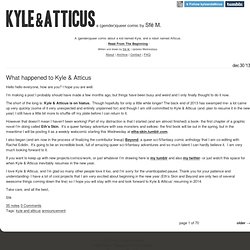 I hope you are well. I’m making a post I probably should have made a few months ago, but things have been busy and weird and I only finally thought to do it now. The short of the long is: Kyle & Atticus is on hiatus. Though hopefully for only a little while longer! The back end of 2013 has swamped me- a lot came up very quickly (some of it very unexpected and entirely unplanned for) and though I am still committed to Kyle & Atticus (and plan to resume it in the new year) I still have a little bit more to shuffle off my plate before I can return to it. However that doesn’t mean I haven’t been working! I also began (and am now in the process of finalizing the contributor lineup) Beyond, a queer sci-fi/fantasy comic anthology that I am co-editing with Rachel Edidin.

I love Kyle & Atticus, and I’m glad so many other people love it too, and I’m sorry for the unanticipated pause. Take care, and all the best, Sfé 35 notes Tags: kyle and atticus announcement. Seiyuu CRUSH! - a BL/yaoi webcomic. Tripping Over You » wiggle room. There are currently no widgets assigned to the left-sidebar, place some! 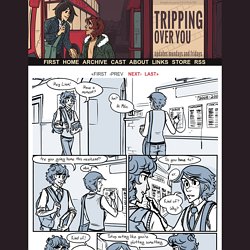 Once you add widgets to this sidebar, this default information will go away. Widgets can be added by going to your dashboard (wp-admin) ➔ Appearance ➔ Widgets, drag a widget you want to see into one of the appropriate sidebars. Updates Sunday. Art, comics, and bar reviews by Bill Roundy. Absolute Denial - Comics - Cover. Abel Boddy » #001 – “Abel Boddy” ADAM & ANDY Comic Archive. Begin Reading. Start Here – Chapter One / Page One “Whatever it is you’re seeking won’t come in the form you’re expecting.” — Haruki Murakami. 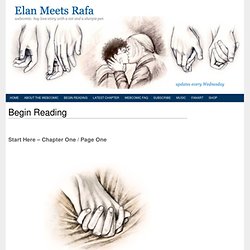