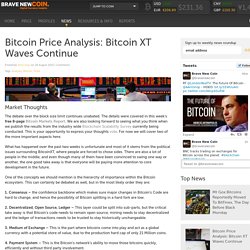 The details were covered in this week's free 8-page Bitcoin Markets Report. We are also looking forward to seeing what you think when we publish the results from the industry wide Blockchain Scalability Survey currently being conducted. Distributed Networks. BitPay: Microsoft Has Aggressive Global Vision for Bitcoin. "Our industry does not respect tradition – it only respects innovation. 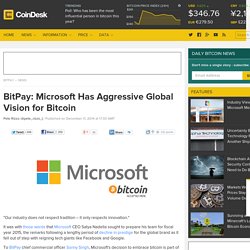 " It was with those words that Microsoft CEO Satya Nadella sought to prepare his team for fiscal year 2015, the remarks following a lengthy period of decline in prestige for the global brand as it fell out of step with reigning tech giants like Facebook and Google. Waleed A. Alballaa sur Twitter : "مقارنة بين تركيبة رسوم بطاقات الإئتمان التقليدية و #Bitcoin... What Smart Contracts Need to Learn - Lawbitrage. One of the great promises of cryptocurrency networks such as those underlying Bitcoin and Ripple is that they will allow for the creation of a wide variety of economic applications that go far beyond transferring digital money. 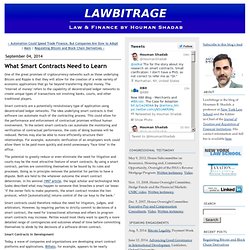 The "internet of money" refers to the capability of decentralized ledger networks to create unique types of transactions not involving banks, courts, and other traditional players. Smart contracts are a potentially revolutionary type of application using decentralized ledger networks. The idea underlying smart contracts is that software can automate much of the contracting process. Bitcoin: what happens when the miners pack up their gear? Radar has a backchannel, and sometimes we have interesting conversations on it. 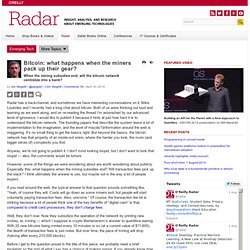 Mike Loukides and I recently had a long chat about bitcoin. Both of us were thinking out loud and learning as we went along, and on re-reading the thread I’m astonished by our advanced level of ignorance. The MtGox 500. The Bitcoin Model for Crowdfunding. Bitcoin is not just a protocol or money, it’s a new business model for Open Source Software. 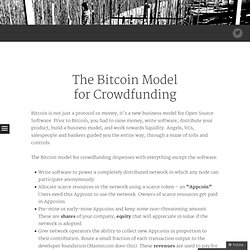 Prior to Bitcoin, you had to raise money, write software, distribute your product, build a business model, and work towards liquidity. Angels, VCs, salespeople and bankers guided you the entire way, through a maze of tolls and controls. The Bitcoin model for crowdfunding dispenses with everything except the software: Write software to power a completely distributed network in which any node can participate anonymously.Allocate scarce resources in the network using a scarce token – an “Appcoin”. Users need this Appcoin to use the network. Hawala: The Working Man’s Bitcoin. An Afghan money broker, or hawaladar, in Kabul. 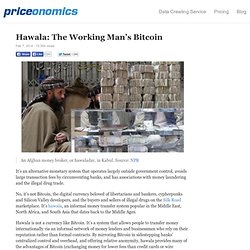 Source: NPR It’s an alternative monetary system that operates largely outside government control, avoids large transaction fees by circumventing banks, and has associations with money laundering and the illegal drug trade. Sacramento Kings NBA Team to Accept Bitcoin. This is what people in 9 emerging markets think about Bitcoin (survey) Bitcoin took us on a wild ride this year — it saw highs and lows, attracting both heady optimism and angry tirades from skeptics. 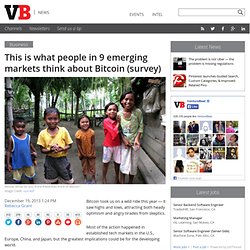 Most of the action happened in established tech markets in the U.S., Europe, China, and Japan, but the greatest implications could be for the developing world. Jana is a mobile platform that connects brands with consumers in emerging markets. The company also has a research arm and decided to survey 1,800 people across nine countries — India, Indonesia, Philippines, Vietnam, Kenya, Nigeria, South Africa, Brazil, and Mexico — to see what they think about Bitcoin (infographic below). When asked “have you ever heard of Bitcoin before today,” 48% of Indonesian respondents said yes, followed by 45% in Vietnam, and 34% in the Philippines — all Asian countries. South Africa and Mexico had the lowest response rates of 13% and 16% respectively. 58% of all respondents said they would “feel comfortable” investing in virtual currency.

Guest post: Why assassins don’t prefer Bitcoin. There's Now A Crowdfunded 'Assassination Market' In Which People Pay Bitcoins To Have Public Figures Killed. The more we learn about Bitcoin, the more it seems like it was designed exclusively for criminals. 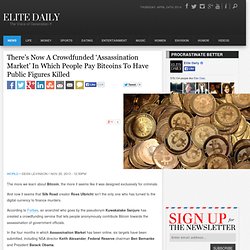 And now it seems that Silk Road creator Ross Ulbricht isn’t the only one who has turned to the digital currency to finance murders. According to Forbes, an anarchist who goes by the pseudonym Kuwakatake Sanjuro has created a crowdfunding service that lets people anonymously contribute Bitcoin towards the assassination of government officials. In the four months in which Assassination Market has been online, six targets have been submitted, including NSA director Keith Alexander, Federal Reserve chairman Ben Bernanke and President Barack Obama. 124.14 bitcoins – the largest current bounty on the site – was offered for Bernanke, most likely because he is considered the greatest threat to Bitcoin’s survival. Top 100. Virgin Galactic to accept bitcoin: Branson. FBI seizes underground drug market Silk Road, owner indicted in New York. The dramatic fall of BitCoin: No end in sight. We’ve discussed BitCoin at some length on Memeburn, including how it works, its potential downfalls, and its genuine merits. 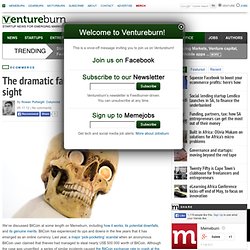 BitCoin has experienced its ups and downs in the few years that it has emerged as an online currency. Last year, a major ‘pick-pocketing’ scandal when an anonymous BitCoin user claimed that thieves had managed to steal nearly US$ 500 000 worth of BitCoin. Although the case was unverified, a series of similar incidents caused the BitCoin exchange rate to crash at the time. Bitcoin News Network: Kevin Day Makes Show Of Good Faith. In the recent controversy surrounding Mt. 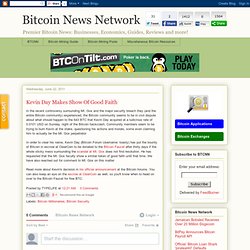 Gox and the major security breach they (and the entire Bitcoin community) experienced, the Bitcoin community seems to be in civil dispute about what should happen to the 643 BTC that Kevin Day acquired at a ludicrous rate of 0.0101 USD on Sunday, night of the Bitcoin hackcrash. Community members seem to be trying to burn Kevin at the stake, questioning his actions and morals, some even claiming him to actually be the Mt. Gox perpetrator. Virtual currency: Bits and bob. Digital Black Friday: First Bitcoin "Depression" Hits. Much like the New York Stock Exchange, Bitcoin exchanges have suffered from their first massive loss -- a virtual "Black Friday", so to speak. (Source: Google Images) Some say Bitcoins could make buying illegal drugs easier. However, in reality Bitcoins are far from "untraceable". (Source: YouTube/Beardo/Dirt Nasty) Mt. Currency experiences massive inflation in a single day, markets stay open.