Bitcoin for the unbanked

Bill Gates on The Verge: Can mobile banking revolutionize the lives of the poor? By Ben Popper We're excited to have Bill Gates as our guest editor in February. 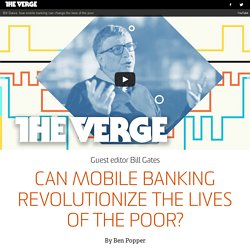 Throughout the month, Bill will be sharing his vision of how technology will revolutionize life for the world's poor by 2030 by narrating episodes of the Big Future, our animated explainer series. In addition, we'll be publishing a series of features exploring the improvements in banking, health, farming, and education that will enable that revolution. And while the topics reflect the bets Bill and his wife Melinda are making with their foundation, they've asked us for nothing less than fully independent Verge journalism, which we're more than happy to deliver. Turns out Bill Gates is a pretty confident guy. Nilay Patel, Editor-in-Chief.

Global Development Professionals Network. As Greece spent January under threat of a bank run, and excited Athenians chatter about it, the problem with modern banks is illustrated by the word for them: trapezai. 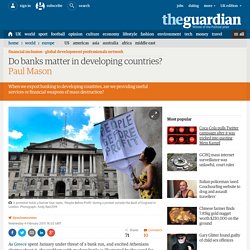 This, of course, means table. It predates the use of the Italian word banco – or bench – but describes the same thing. In ancient societies banks helped money function as a medium of exchange. Money changers sat at their tables in the market place and exchanged coins from foreign cities for those of their home city. The result was increased liquidity. The Bootstrapper’s Guide To Bitcoin Remittances. Editor’s note: Luis Buenaventura is a co-founder and head of product at Rebit.ph, a bitcoin remittance startup wholly owned and operated by Satoshi Citadel Industries in the Philippines. 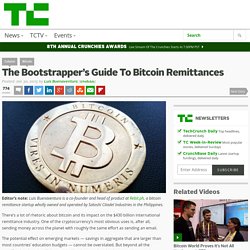 There’s a lot of rhetoric about bitcoin and its impact on the $430 billion international remittance industry. One of the cryptocurrency’s most obvious uses is, after all, sending money across the planet with roughly the same effort as sending an email. The potential effect on emerging markets — savings in aggregate that are larger than most countries’ education budgets — cannot be overstated.

But beyond all the pontificating there is still the practical implementation that has yet to be sorted out. Bitcoin Blazes New Trail In Emerging Markets. Editor’s Note: Christine Magee is an editor for CrunchBase. 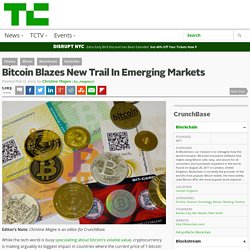 Bitcoin’s Big Opportunity In Africa. On a Tuesday night at a Nairobi tech incubator, Michael Kimani preaches the virtues of crypto currencies to a small gathering of tech-savvy Kenyans. 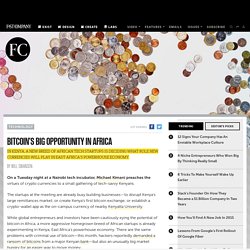 The startups at the meeting are already busy building businesses—to disrupt Kenya’s large remittances market; or create Kenya's first bitcoin exchange; or establish a crypto-wallet app as the on-campus currency of nearby Kenyatta University. While global entrepreneurs and investors have been cautiously eying the potential of bitcoin in Africa, a more aggressive homegrown breed of African startups is already experimenting in Kenya, East Africa's powerhouse economy. There are the same problems with criminal use of bitcoin—this month, hackers reportedly demanded a ransom of bitcoins from a major Kenyan bank—but also an unusually big market hungry for an easier way to move money. "It's up to us to decide how to use it," says Kimani, head of the African Digital Currency Association (ADCA). "I saw an opportunity to be a pioneer," he said.

Coming to Africa: Bitcoin Ready to Invade The Dark Continent. Western society has a tendency to focus on how Bitcoin and the world, revolve around them in domestic terms. 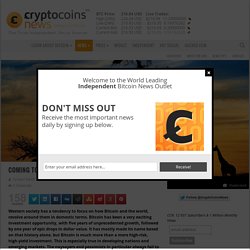 Bitcoin has been a very exciting investment opportunity, with five years of unprecedented growth, followed by one year of epic drops in dollar value. It has mostly made its name based on that history alone, but Bitcoin is much more than a mere high-risk, high-yield investment. This is especially true in developing nations and emerging markets. The naysayers and pessimists in particular always fail to see the forest through the trees when it comes to Bitcoin, and its global growth potential. Africa represents many perceptions to many people. The M-Pesa has gone from a concept that started two years before Bitcoin in 2007 to arguably the most successful mobile payment system in the world, with over 17,000,000 accounts in Kenya alone. Michael Kimani has started the African Digital Currency Association (ADCA) after hearing about Bitcoin three years ago on BBC. Can Bitcoin Deliver on its Promise to the World's Unbanked? Jason Tyra is a Certified Public Accountant and ACFE Certified Fraud Examiner. 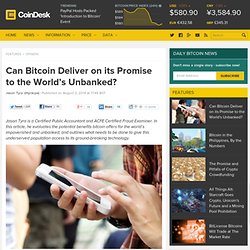 In this article, he evaluates the potential benefits bitcoin offers for the world’s impoverished and unbanked, and outlines what needs to be done to give this underserved population access to its ground-breaking technology. While many relatively affluent westerners have adopted bitcoin as a political statement, a cost-saving measure or a technical curiosity, a very small portion of its users have done so as a result of the demands of their own political or socioeconomic circumstances. However, for those that potentially stand to gain the most from the digital currency – impoverished and unbanked people living in developing regions of the world – bitcoin remains largely inaccessible. An objective look at a few of bitcoin’s characteristics and how these apply to developing countries shows that the ecosystem has some room for improvement before it can gain traction among the world’s poor.