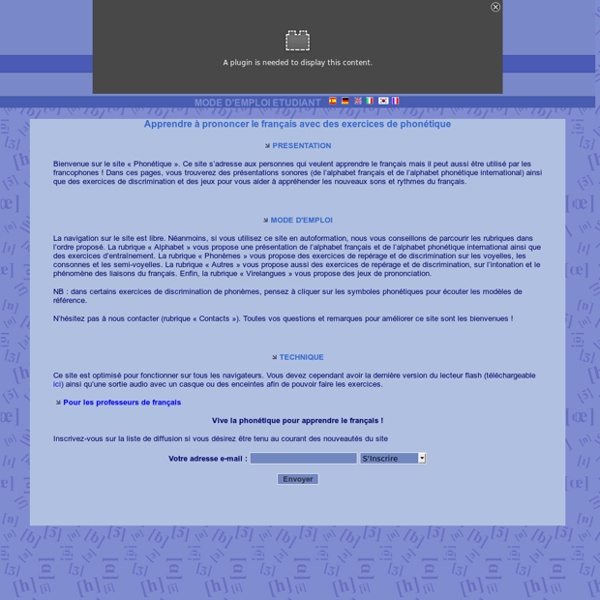 wonderfuldiy There’s really no such thing as having too many baby blankets — something every parent would probably agree on! This is why one of the most amazing gifts any well-wisher can offer a baby or toddler of any age is a stunningly beautiful handmade baby blanket – a genuine one-of-a-kind never to be repeated. But while there are thousands of different ways a baby blanket can be crocheted … well, let’s just say we think we’ve found the pick of the bunch! What you’re looking at here is a wholly unique 6 petal puff flower baby blanket, which is less a useful accessory and more a work of art in its own right! Top 10 French Pronunciation Mistakes and Difficulties Many students find that pronunciation is the hardest part of learning French. The new sounds, the silent letters, the liaisons... they all combine to make speaking French very tricky. If you really want to perfect your French pronunciation, your best option is to work with a native French speaker, preferably one who specializes in accent training. If that is not possible, you need to take things into your own hands, by listening to French as much as possible, and by studying and practicing the pronunciation aspects that you find most difficult.

prononciation-phonetique - Le blog de frenchteacher "You have been a fantastic teacher and a friend. My move to France would have been positively awful had I not had such a wonderful tuition by you. You are truly an energetic, interesting person who makes people at ease and comfortable in your company. Thank you for everything, Nikki. (Nikki's own website to help you to move to France; "Vanessa is an excellent teacher who makes lessons interesting and fun. Guiding Services Guiding since 1985, Mercat Presents… professional coach guides and tour directors for extended tours throughout Scotland. Working with you to fulfill your client's needs and tour itinerary, we will source the best guide to deliver your tour - a warm welcome and a lasting memory of Scotland is guaranteed. All our guides are quality assured annually, as standard, to ensure we fulfill our promise of providing enthusiastic, friendly guides who will go the extra mile. Foreign language guides are also available upon request.

The 27 Characteristics of A 21st Century Teacher "21st Century Educator" is probably the most popular buzzword in today's education. There is a growing and heated debate whether or not to label educators as 21st century and each camp has its own concept and arguments, however, for me personally I see teaching in 21st century as having undergone a paradigmatic shift. This is basically due to the emerging of the " social web" and the huge embrace of technology and particularly the mobile gadgetry in our classrooms. It would be unfair to ignore these huge transformations and their impact on education. Therefore, and as a result of these changes teachers now are required to have digital skills that were not called for before.

French pronunciation ~ Soirées entre amis In this episode: Pol shares his thoughts on always partying with the same group of friends… To use the dictionary from French to English: Click or Tap maroon words in the story below. Learn French online one fun story at a time; also improve your pronunciation with integrated French pronunciation audio and remember French vocabulary easily through short stories.

French Phonetics - FrenchCrazy [Updated May 11th, 2014] Phonology and Phonetics are two different fields in the science of linguistics that study how people make sounds and pronounce words. Phonology (and phonetics) should be interesting because knowing how the French make their sounds could help French language learners across the globe acheive a pronunciation “non-marquée“, that perfect pronunciation. The whole reason people have foreign accents in the first place is because their mouth cannot adjust to the correct ways of creating certain phonemes! In this extensive article, I will introduce many cool topics, for example: Did you know that in French, syllables have the tendency to end with a vowel?

American Geographical Society - Mission, Cause and Credo Mission The American Geographical Society (AGS) advances and promotes geography in business, government, science, and education. Our goal is to enhance the nation’s geographic literacy so as to engender sound public policy, national security, and human well-being worldwide. ESL Flashcards Here you will find a collection of hundreds of flashcards for ESL kids. Each flashcard set has both small (four on one A4 sheet) and large (two on one A4 sheet) versions. There are two copies of each card, one with a word describing the picture, and the other without a description so that you can write your own. This is particularly helpful with differences in American and British English. The flashcards are saved as .pdf files which are opened in your browser with Adobe Acrobat Reader or other PDF reader. Most computers already have this installed but if not, you can download it here for free.

Madame Belle Feuille: j'aime lire - teaching reading in grade 1 French Immersion What's your routine for teaching reading and specifically French sound blends in grade 1? Here's an overview of mine. September to December we review the letter sounds from kindergarten using Jolly Phonics. French Pronunciation: How to Lose my Foreign Accent How to Improve my French Pronunciation How can I improve my French pronunciation and lose my pesky accent? Well to explain this question, we would need to understand that a foreign accent results from not fully adapting to another language’s set of phonological and phonetic rules.

The First Americans In the 1970s, college students in archaeology such as myself learned that the first human beings to arrive in North America had come over a land bridge from Asia and Siberia approximately 13,000 to 13,500 years ago. These people, the first North Americans, were known collectively as Clovis people. Their journey was made possible, according to archaeologists far and wide, by a corridor that had opened up between giant ice sheets covering what is now Alaska and Alberta.