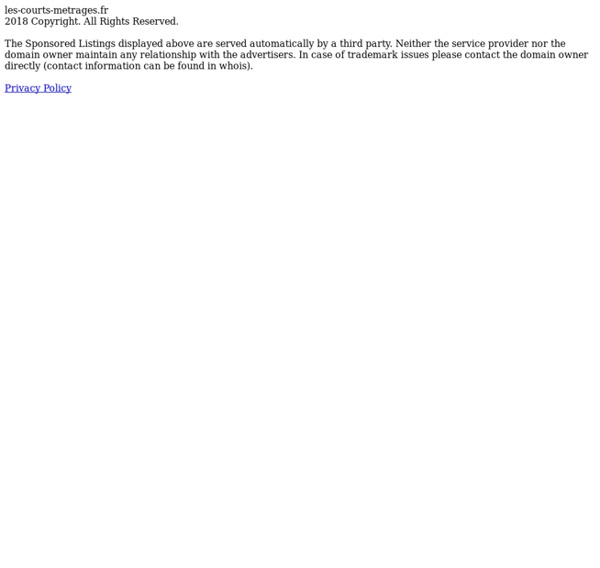 Portraits Drawn with Tea, Vodka, Whiskey and Ink by Carne Griffiths UK-based illustrator Carne Griffiths creates these striking portraits with uncommon mediums such as tea brandy, vodka, whiskey, graphite and calligraphy ink. His drawings most frequently explore human and floral forms, as says he’s “fascinated by the flow of line and the ‘invisible lines’ that connect us to the natural world.” The four pieces above are part of a limited edition postcard set just released by Griffiths, each of which comes in a fancy custom-illustrated, wax-sealed envelope. He also has a solo show at Ink-d Gallery in Brighton that closes this Saturday. FullDocumentary.com First to purchase will own this one of a kind asset 1,538 Customers shopping on HugeDomains right now! 73% of all domains registered on the Web are .coms.

French TV for listening practice - Kwiziq French Blog A great source of French listening practice is television. In some ways, it’s better than listening to news on the radio or even audio created for French learners because the language is much more authentic. For example, there will be slang and lazy pronunciation, both of which will help train your ear for talking to French people in real life, rather than just chatting with your teacher and classmates. How to access French TV Download & Streaming : Moving Image Archive : Internet Archive Anime (/ˈænəˌmeɪ/) (Japanese: アニメ) is a style of hand-drawn and computer animation originating in, and commonly associated with, Japan. The word anime is the Japanese term for animation, which means all forms of animated media. Outside Japan, anime refers specifically to animation from Japan or as a Japanese-disseminated animation style often characterized by colorful graphics, vibrant characters and fantastical themes. The culturally abstract approach to the word's meaning may open... Collections of items recorded from television, including commercials, old television shows, government proceedings, and more.

Swirling, Psychedelic Self-Portraits by Nikos Gyftakis Greek artist Nikos Gyftakis created this wonderful series of swirling self-portraits between 2004-2005. The works are made with oil pastels on canvas and are actually quite large, with a few of the pieces taller than 5′ (1.5m). You can see many more from this series and more of his recent work in his work gallery. (via empty kingdom) Top 10 Websites To Watch Movies Online For Free We all love the idea of watching movies with just your Internet connection and a computer and no strings attached. Although some of you may think that this is not legal, i would say "why not try something ill-legal today". There are lots of websites which provide to watch movies online, no need to sign-up and in few clicks you are into the movie arena.

The Daily Sketches of Guy Denning Every single day since November 2010, without fail, Bristol-based artist Guy Denning (previously) posts a daily sketch to his Drawing a Day blog (occasionally mirrored on his Facebook page). It’s well worth following. For more of his work head over to Signal Gallery where he had a solo show in October, and you can see much more on his website.

5min - Find the best how to, instructional and DIY videos – Life Videopedia Up next 0:26 0:38 0:41 2:41 0:56 0:46 1:01 1:14 0:56 Caption Languages English Hand Drawn Rotoscoping Gifs and Other Animation Experiments by Matthias Brown I recently stumbled onto the Tumblr of animator Matthias Brown who shares his numerous experiments with rotoscoping and other animation techniques in quick looped gifs. In case you’re unfamiliar, rotoscoping is method where animators trace real footage frame by frame to create live-action animations with a hand drawn feel, a technique invented in 1915 by Max Fleischer who used it in his series Out of the Inkwell. While the technique is a century old it’s oddly refreshing to see it appear in today’s barrage of animated gifs, gritty imperfections and all. You can see much more of Brown’s work over on his aptly titled site TraceLoops, and he talks a bit more about his process here.