How to make cinnamon roll pancakes. 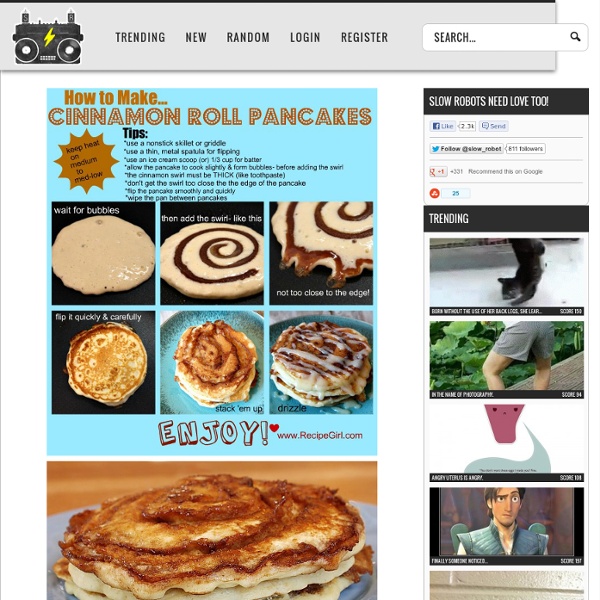 The case of the disappearing candy corn. SCORE 76 I think I found your problem. SCORE 181 A few hours after I eat at Taco-Bell. Probability of a white Christmas. Just one more example... Ever wonder why it's called eggplant? Overly attached koala. Wake me up when it's Friday. Related:  Meals

Hasselback Potatoes These Hasselback potatoes looks beautiful, don't' they? Here, I also added several cloves of garlic to these Swedish version of baked potatoes to enhance the flavor. It turned out great, they were very delicious, crispy on the outside and tender on the inside.. Updated: November 26th 2013 This is an updated post with a new video guide on How To Slice Hasselback Potatoes Hasselback Potatoes (Printable Recipe) Ingredients 6 Medium Size Potatoes 2 - 3 Cloves Garlic, thinly sliced 2 Tbsp Olive Oil 30 g Butter Maldon Sea Salt Freshly Ground Black Pepper Method Preheat the oven to 220˚C (425˚F). Arrange the potatoes in a baking tray and insert the garlic in between the slits. Bake the potatoes for about 40 minutes or until the potatoes turn crispy and the flesh is soft.

How to Make Crêpes Without a Crêperie A brief tutorial on how to make crêpes at home, no crêperie required. Just you, your stove and a bit of batter and you’ll have a plate full of thin pancakes in no time at all. I’ve always wanted to live abroad, even if just for a short time. While the dream of leaving and exploring was there, the reality was and is that I remain fully rooted in the Midwest.In college I was a single parent. In order to declare my Spanish major, I had to get the mandatory study abroad waived. To the eggs and milk, add in flour, melted butter and a bit of salt. When it’s time to cook, heat a pan with rounded edges over medium-high heat. Cook the crêpe for 30 seconds or so. Slide the crêpes into a flat pile and let them cool a bit while you repeat the process and make more crêpes. And that’s it. If you’re wondering, no, I still have not been to France, nor have I ventured to Australia. Copyright © Food for My Family.

Recipes Con la tecnología de Traductor Stay Connected search our site Categories General Google Layer Slider Google Text Ad – 200×90 Running Schedule Running Program for Absolute Beginners Fitness Categories Zip List <A HREF=" EstufsDeveloped by WebArt MediaLabs Information provided on this site, or through links to other web sites, is not intended as a substitute for qualified medical or professional advice and should not be misconstrued as such. Copyright @ 2012 Skinny Ms. Texto original Sugiere una traducción mejor Nutella-Stuffed Breakfast Muffins God bless taxes. After all, if cocoa beans hadn’t have been taxed sixty some-odd years ago in Italy, we may never have the creamy concoction of bliss known as Nutella. Anything that mashes chocolate and hazelnuts together is immediately worth my time, but call that something I can eat for breakfast, and I’ve pretty much transcended rational thought. Nutella Breakfast Muffins 1 egg1/3 cup oil1/3 cup sugar3/4 cup flour1/4 teaspoon baking powder1/8 teaspoon baking soda1 teaspoon vanilla1/2 teaspoon Vanilla Nut & Butter flavoring (optional)1/2 cup buttermilk1/2 cup Nutella1 teaspoon coarse sea salt with 1 tablespoon sparkling sugar Preheat oven to 350 degrees. Bake in preheated oven for 17-19 minutes, or just until the center of the muffins spring back when touched lightly with your finger.

Web's Tastiest: Pancakes Recipes Everyone knows that breakfast is the most important meal of the day. So of course you want to get off to a good, healthy start. However, anyone with kids knows that some mornings are just too special to worry about a properly balanced meal. Spending time in the kitchen as a family, whipping up something absolutely decadent and definitely too sweet, is the stuff that memories are made of. Cinnamon Roll Pancakes Cinnamon rolls are fantastic all on their own, so infusing them with pancake goodness is a recipe for a heavenly morning. Lemon Blueberry Pancakes Lemon and blueberry are about as perfect a pair as Sunday morning and pancakes. Apple Pancakes An apple a day will keep the dentist away, so when you shred them and throw them into a pancake batter, you’re really making a healthy choice. Nutella Pancakes Need we say more? Apple Cider Doughnut Pancakes Forget leaves and pumpkin spiced lattes, nothing says fall like apple cider doughnuts. Cake Batter Pancakes Red Velvet Pancakes

Meat Recipes White Cheddar Chicken Pasta Cilantro Pesto Grilled Shrimp crockpot chinese! honey bourbon chicken Louisiana Shrimp Casserole Crock Pot Ham. Bake Protein-Packed Bacon Omelet Bites It was 11 a.m., and I was I plowed my eager mitts into the trail mix buried in my office drawer. Just a handful, I told myself. Twenty handfuls later, and I tossed the empty bag in the trash. I was still hungry. Something had to be done. I’ve been training for triathlons this summer and fall, and thanks to the pool’s hours and the length of my workouts, I’ve been forced into exercising in the morning. As a fan of the inventive protein-packed recipes created by trainer and nutrition coach Jen Comas Keck , C.P.T., I thought Comas Keck might have a solution. She suggested these bacon-wrapped California omelet bites—which are delicious as they sound.

Tifa Kerbal Chomps Your Face - Blog - Missing Morocco When you mention Morocco people think of Humphrey Bogart, Arabian Nights, exotic markets, romantic getaways, tiles, fairy tales. I think of food. Lots and lots of food. In fact, every time my family and I visit, there are so many people to see. Old friends, aunties, cousins and ALL of them want to feed you. Don’t even get me started on all the extraordinary restaurants, but a home cooked meal is where it’s at. I’ve been cooking more Moroccan meals at home recently. The recipe itself is very basic, but there are quite a few steps involved.It will behoove you not to rush it. Ingredients:2 cups flour2 cups fine semolinaA dash of salt1/4 teaspoon yeast1 cup warm water to combine the dough (Add more if needed) For folding and cooking:Olive oilVery soft butterSemolina Put all your dry ingredients in your mixer and with the dough hook just mix them up until everything is pretty incorporated. Divide the dough into small balls and cover with plastic wrap to rest for 15 minutes. Biss’ha!

Secret Ingredient, Better Than Takeout! Beef and Broccoli Beef and Broccoli that is literally better than any Chinese takeout and easier than you might think! Beef and Broccoli is the epitome of Chinese food in my book. It just doesn’t get better than tender slices of beef that are SO juicy, SO flavorful as they soak up the marinade and then slathered in savory soy, ginger, garlic sauce. The rich flavor is complimented by crisp-tender broccoli florets and hot steaming rice. I was at an awesome restaurant a few days after I had made this Beef and Broccoli recipe and I was still craving it. So even though I had just eaten beef broccoli, I giddily ordered it off the menu. The tender, thin slices of beef are so juicy, so flavorful as they soak up every savory essence of the marinade, and then the sauce; oh the sauce! What Kind of Meat is used for Beef and Broccoli? I love Broccoli Beef for all the aforementioned reasons and because it is fairly economical when it comes to beef. How do you Tenderize Beef? How do you Make Chinese Beef and Broccoli? 1.

Fluffy Pancakes | Blogger For Hire This pancake recipe is the result of mixing and matching different recipes from many different sources. It is the result of trying and failing so many times, that I almost declared pancakes as the one breakfast recipe I couldn’t master. But I persisted, and this recipe is perfect – as perfect as a pancakes recipe can be, because making pancakes does involve frying, and frying is something that each of us needs to play with. But the instructions here are as close as it gets to “perfect,” and the result? This recipe makes 16-18 pancakes. Fluffy Pancakes Makes 16-18 pancakes. Dry Ingredients 2 cups all purpose flour 1/4 cup sugar 1 teaspoon salt 1.5 tablespoons baking powder (make sure it’s fresh) Liquid ingredients 1 large egg 2 cups minus one tablespoon reduced fat (2%) milk 2 tablespoons melted butter, slightly cooled 1 tablespoon high quality vanilla extract Directions 1. 2. 3. 4. 5. Serve with warm maple syrup and berries. (Just in case) –> More Pancake Recipes: Similar Posts:

- StumbleUpon There’s a thing in my house that when you have ripe ol bananas either you make banana bread or banana fritters. These delicious tasty treats can be eaten morning, noon, or night, as a snack or as dessert. These fritters are so easy to make and will satisfy any craving you may have. So if you have a few of these bananas lying around your hose… don’t toss them, put them to GREAT use! Enjoy! Peel and mash the ripe bananas. Beat egg, sugar, vanilla, cinnamon, and nutmeg. Next, blend egg mixture with mashed bananas. Make sure it is all incorporated. Then sift flour and baking powder into the banana/egg mixture. Mix it all together. If the batter seems to be too thick add a little milk… I added about 1/4 cup to 1/2 cup of milk. Add oil to a frying pan and place on medium high heat. Drop spoonfuls of the banana fritter batter into the hot oiled frying pan. Flip when you see the edges starting to get brown and golden. Lastly, combine cinnamon and sugar together to create your cinnamon sugar. Ingredients