89 Simple Swaps That Could Change Your Life 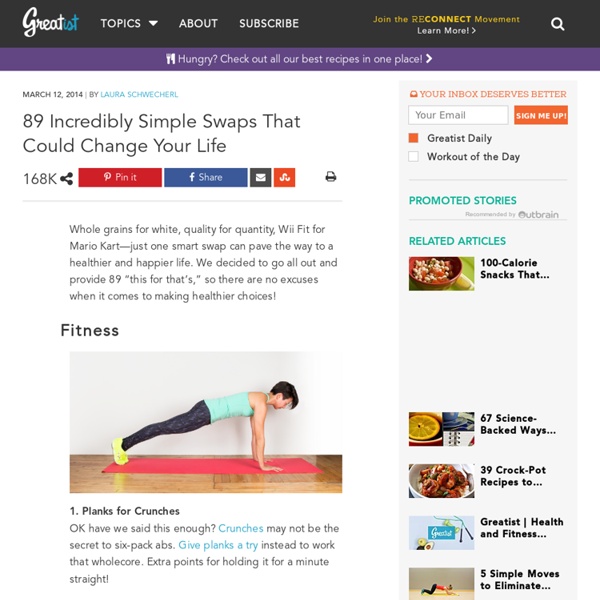 Whole grains for white, quality for quantity, Wii Fit for Mario Kart—just one smart swap can pave the way to a healthier and happier life. We decided to go all out and provide 89 “this for that’s,” so there are no excuses when it comes to making healthier choices! Fitness 1. Planks for Crunches OK have we said this enough? 2. Congrats on that 26.2-mile marathon. 3. In a perfect, outdoor world, flat roads rarely exist. 4. Trash that Cosmo-reading elliptical routine and surprise the body with a fun, calorie-burning cardio session. 5. Stretching out cold muscles could lead to injury. 6. We know that barbell looks tempting. 7. How often does someone complain about having to sit in a cubicle all day? 8. Okay, we get it. 9. Falling asleep at the wheel? 10. Skip the big machines (they’re sweaty anyway) and go for the little guys—free weights are more versatile and allow for a full range of motion in the joints. 11. Isolating muscles is so 2012. 12. Forget staying seated to work out the legs. 13.

15 healthy dessert recipes for a sugar fix Sometimes, you just crave something sweet. There's nothing wrong with that, but it's all about what kind of sugar you eat. Unrefined sugar is the best kind – natural and unprocessed. White sugar has been over-processed and contains little nutritional value; it can stimulate your appetite, cause high or low blood sugar and dips in energy. Natural sugars such as agave nectar, stevia and sugar from fruits are a far healthier choice. We've come up with a pretty foolproof list of vegan desserts packed with natural sugars, fibre and vitamins that are perfect anytime your sweet tooth is calling. #1. With healthy, dairy-free almond milk, sweetness from maple syrup and vanilla pods and of course chia seeds, this pudding is delicious yet good for you. #2. Choosing Raw's great range of vegan dessert recipes includes this little number. #3. You heard us right, gooey chocolate doughnuts that are vegan and gluten-free! #4. #5. #6. #7. #8. This raw vegan cheesecake is gluten and soy-free. #9. #10.

Give Credit Where It's Due - Ben Dattner by Ben Dattner | 3:16 PM March 27, 2012 You might remember the FedEx commercial “Stolen Idea”. A boss asks his team for cost-cutting ideas and a young staffer suggests opening a FedEx.com account. Everyone is silent. The boss then repeats the suggestion, without crediting the staffer, and the rest of the team congratulates him on his brilliance. Most leaders know not to act like the boss in the FedEx ad. Give credit where credit is due. Credit team members for crediting one another. Avoid the temptation to blame. As a leader, you need to pay more attention to the allocation of credit and blame to individuals so — perhaps paradoxically — your team pays less attention to it. In one executive team I worked with, a hierarchical culture meant that people were being recognized for their status and power, rather than their performance.

Stomach Exercise: Rub Your Stomach Away In Just 2 Minutes a Day? Did You Know…there’s a stomach exercise where you can rub your stomach away effortlessly using nothing but your hand — for only 2 minutes a day? This may sound hard to believe, but Dr. Stephen Chang, an M.D. and Ph.D. who’s trained in both Western and Chinese medicine, states that this simple 2-minute internal exercise, which does not come from Western medicine, but rather from the wisdom of ancient Chinese sages — has been used successfully as a self-healing stomach remedy for over 6,000 years. Whatever you do, don’t confuse this internal exercise with the external exercises of the Western world, such as sit-ups, crunches and other movements that only firm up the underlying stomach muscles … but do nothing to melt the fat surrounding those muscles. According to Dr. Chang, losing weight is a simple matter of increasing the efficiency of the digestive system. Here’s how to do the stomach-rubbing exercise: 1) Lie flat on your back on your bed or on the floor.

30 amazing post-workout snacks to try Snacking after your workout may not seem important, but getting the right balance of carbs, fats and proteins to satisfy your hunger and help recovery from your workout is vital. Ensuring you down a protein shake or enjoy a protein-packed snack after your workout helps to rebuild tissue. Just ask the guys from the new Street Fighter: Assassin's Fist series, who trained hard for six months to build their physiques – protein shakes were top of the list as their post-workout snacks. Breakfast may be the most important meal of the day, but what you eat after a workout is equally as important. Which is why we've come up with 30 amazing post-workout snacks for you to try. Don't say we're not good to you. #1. Why not try adding some low-fat cottage cheese and rolled oats to beaten egg whites for a protein-packed pancake? #2. This one's simple, for when you're too tired to make much effort. #3. We love adding greens to our smoothies for added vitamins and minerals. #4. #5. #6. #7. #8. #9. #10.

The Number One Mistake People I Interview Are Making These Days The Wolverine Workout | Movie Workouts How does Hugh Jackman continue to pack on muscle mass and play one of the most physical of all movie superheroes at 44 years old? The latest installment of the popular series, “The Wolverine”, hits theaters this summer. Read on to learn what can you learn from his wolverine workout routine and apply it to your own summer blockbuster. How to get in Wolverine shape Jackman continues to work with Mike Ryan, an Australian personal trainer and longtime friend of Hugh Jackman. “In Wolverine, Hugh looks big onscreen, but really he’s just ripped. After watching Jackman on the set of Wolverine, fellow actor Will Yun Lee had this to say: “I’ve seen playbacks of Hugh fighting different characters in the movie he’s no joke! “For Wolverine, I ramp it up,” Jackman says. The workout itself is not groundbreaking. The 12-Week Hugh Jackman Wolverine Workout Jackman incorporates supersets into his Wolverine workout. Weeks 1 & 2: Hypertrophy Monday: Warmup: 10 minutes of cardio (at 50% effort) -Rob

How to Get Your Kid to Do Chores (Photo: Ruthie Hansen) There’s a new iPad app for parents to incentivize children to do chores. HighScore House! Co-founder Kyle Seaman tells us that they’ve tracked 150,000 tasks from about 6,000 users in their beta version (full version will launch in a couple months). HighScore House! Here are the top 10 tasks on HighScore House: Brush teeth (AM)Make bedHomeworkBath timeLaundryClean your bedroomHelp cookWash the dishes Feed the dogBrush teeth (PM) And the top 5 rewards: Video games and video game timeStaying up lateTV timeAllowanceSpecial treat

Master the 7-Minute Workout With This Video News about the so-called “Scientific 7-Minute Workout” has been buzzing around the web like crazy for the last month. In fact, the story even made its way into The New York Times, The New York Daily News, The Huffington Post and many other top news sites. The workout was developed by The Human Performance Institute and requires only resistance from body weight, so you don’t have to purchase any fancy exercise equipment or visit a gym to get in shape. The downside is that the 7-minute workout explanations from Institute and The Times only featured descriptions of the exercises paired with pictures or illustrations -something hard to base an exercise routine on if you’ve never actually done these workouts before. Fortunately, we are here to help and have created a video of the 7-minute workout so you can see exactly what goes into the routine before you try the famous 7-minute workout for yourself and, when you do try it, this video can help you keep track of the exercises and your time.