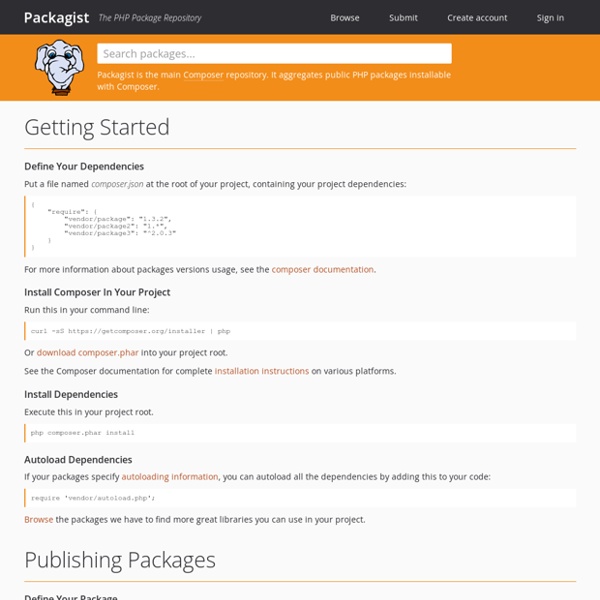 cloudos The Advent of the Cloud OS Phillip J. Windley, Ph.D., Kynetx Announcing Features for Drupal 8 The first Alpha version of the Features module for Drupal 8 is now available! “But wait!” you say. “I thought we didn’t need Features anymore now that we have the Configuration Management Initiative (CMI) in Drupal 8?” This article will explain why some sites will still need Features, how Features works with CMI, and how Drupal 8 Features differs from the Drupal 7 version. Features and CMI Start with Symfony on Mountain Lion - Danilo Braband Start developing Symfony on a Mac is quite easy. Mountain Lion ships with some of the required libraries, but a few are hidden in the depth of the system. This is a guide with shows you how to get Symfony running on Mac OS X Mountain Lion (10.8 that is). Xcode

Learn symfony: a Beginner's Tutorial With the release of symfony 1.0, it’s time for those who haven’t tried it yet to see what’s inside this beautiful framework. Stable, fully documented, and released under the open-source MIT license, symfony is used by hundreds of web sites, including some very large ones (Yahoo! Bookmarks, with its 20 million-strong user base, is built with symfony). If you haven’t taken the time to look at the introductory screencasts on the symfony project website, this simple tutorial will lead you through the basics. The best way to learn and understand symfony is to use it, so this article will lead you through the creation of a photo album application with this framework. Using any HTML inside the tooltip Tooltip content can be any HTML, not just plain text. Move your mouse over the Download button and you'll see a tooltip that contains an image, table and a link element. You can also see the slide effect in action. standalone demo You have enough time to move your cursor away from the trigger element and place it on top of the link that is contained inside the tooltip.

Acquia The Problem I have a theory. My theory is that every single person / organization who is considering building a site on Drupal 8 has created some variation of the exact same spreadsheet. The spreadsheet tracks rows with information, such as which contributed projects the site needs, what URL those projects live at, who the maintainers are, what the project's current porting status is, etc. To figure this out, you go to each of the respective project pages and look for an 8.x version. Symfony Components - Standalone libraries for PHP Beside being a full-stack framework, Symfony is also a set of decoupled and standalone components. What is a Component? Symfony Components implement common features needed to develop websites.

minify - Combines, minifies, and caches JavaScript and CSS files on demand to speed up page loads. News 2013-07-23 Minify 2.1.7 is released in response to a serious vulnerability discovered in all previous versions. You are strongly urged to follow the instructions in the report to secure your installation, and to upgrade to Minify 2.1.7. 2013-07-19 Minify 2.1.6 released. This fixes several JSMin bugs. Check the history for more details. Realityloop. Drupal Development Melbourne Post date: September 23 2015 The Realityloop team is currently at DrupalCon Barcelona.

FilePermissionsACLs POSIX Access Control Lists (ACLs) are more fine-grained access rights for files and directories. An ACL consists of entries specifying access permissions on an associated object. ACLs can be configured per user, per group or via the effective rights mask. These permissions apply to an individual user or a group, and use the same as rwx found in regular permissions. For an explanation of rwx, see FilePermissions "composer update" vs "composer install" - adamcod.es Unless you've been living under a rock, you know about composer1 and packagist2 for managing dependencies in PHP. A few days ago, an issue3 was closed and merged into master which changes the default behaviour of composer update to be functionally equivellent to composer update --require-dev. This confused a few folks4, and here's why: