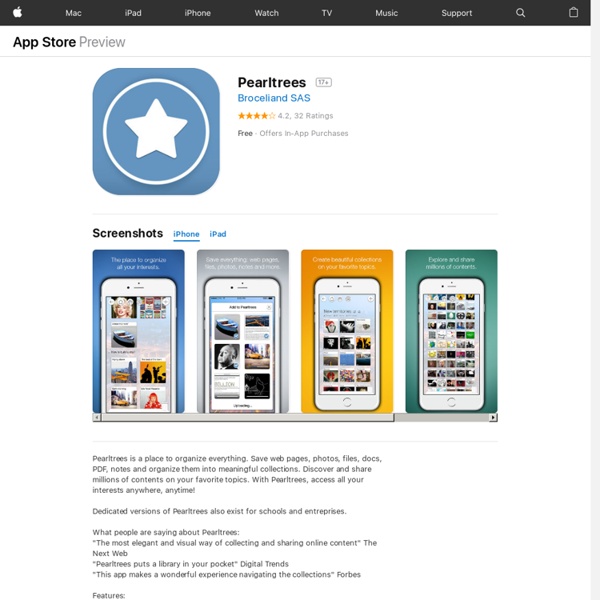 Description Pearltrees lets you organize all your interests. Save web pages, photos, files, docs, PDF or notes and organize them into beautiful collections. Explore millions of contents on your interests and collaborate on your favorite topics. With Pearltrees, access all your interests anywhere, anytime! What people are saying about Pearltrees: "The most elegant and visual way of collecting and sharing online content" The Next Web"Pearltrees puts a library in your pocket" Digital Trends"This app makes a wonderful experience navigating the collections" Forbes Features: • Have everything you like with you all the time• Access all your collections from anywhere: computers, iPads and iPhones• Keep everything you like: web pages, files, photos, notes and more...• Browse your favorite things blazingly fast• Discover interesting stuff in your areas of interests• Collaborate on your favorite topics• Share all of this Pearltrees is free to download and use. Our Terms of Use: Privacy Policy:

Pearltrees Pearltrees refers to itself as "a place for your interests".[8] Functionally the product is a visual and collaborative curation tool[9][10][11][12] that allows users to organize, explore and share any URL they find online as well as to upload personal photos, files and notes.[13] The product features a unique visual interface[14][15] that allows users to drag and organize collected URLs, and other digital objects.[16] that themselves can be further organized into collections and sub-collections,[17] (URLs). Users of the product can also engage in social/collaborative curation using a feature called Pearltrees Teams.[18] Pearltrees was founded by Patrice Lamothe, CEO,[22] Alain Cohen, CTO,[23] Nicolas Cynober, Technical Director,[24] Samuel Tissier, Ergonomy/UI[25] and Francois Rocaboy, CMO.[26] History[edit] Development of Pearltrees began in 2007.

Tiny Wind & Solar Powered Home Lets You Live Off The Grid Anywhere In The World Ecocapsules, designed by Bratislava-based Nice Architects, promise to let anyone live off the grid for up to a year. Each unit is equipped with solar panels, a retractable wind-turbine, and a design that captures rain water. Inside, you’ll find a kitchenette with running water, a flushing toilet, and hot shower. The Ecocapsule “is suitable for a wide range of applications,” write the designers, such as an “independent research station or a tourist lodge to an emergency housing or a humanitarian-action unit.”

The Half-Life of Facts: Dissecting the Predictable Patterns of How Knowledge Grows by Maria Popova “No one learns something new and then holds it entirely independent of what they already know. We incorporate it into the little edifice of personal knowledge that we have been creating in our minds our entire lives.” Pearltrees Comes To The iPhone, Goes Beyond Bookmarking And Adds Photos, Notes, Offline Mode Few startups make it through a year without a pivot or two these days. That really can’t be said about social bookmarking service Pearltrees, however. The company has stuck pretty closely to its roadmap ever since its launch in 2009. After launching on the web, Peartrees is now available on the iPad and, starting today, on the iPhone. How Whole Turmeric Heals The Damaged Brain Long considered impossible to accomplish, new research reveals how a simple spice might contribute to the regeneration of the damaged brain. Turmeric is hands down one of the, if not the, most versatile healing spice in the world with over 600 experimentally confirmed health benefits, and an ancient history filled with deep reverence for its seemingly compassionate power to alleviate human suffering. But, most of the focus over the past decade has been centered on only one of its many hundreds of phytocompounds: namely, the primary polyphenol in turmeric known as curcumin which gives the spice its richly golden hue. This curcumin-centric focus has lead to the development of some very good products, such as phospholipid bound curcumin concentrate (e.g. Meriva, BCM-95) which greatly helps to increase the absorption and bio-activity of curcumin.

The Human Algorithm: Redefining the Value of Data inShare246 The onslaught of real-time social, local, mobile (SoLoMo) technology is nothing short of overwhelming. Besides the gadgets, apps, social networks and appliances that continue to emerge, the pace of innovation is only outdone by the volumes of data that each produce. Everything we share, everywhere we go, everything we say and everyone we follow or connect with, generates valuable information that can be used to improve consumer experiences and ultimately improve products and services. While the amount of personal and ambient information churned out by SoLoMo is often inundating or even perplexing, it is this “big” data that will help businesses evolve and adapt in a new era of connected consumerism. More importantly, the study and understanding of relevant big data will shift organizations from simply reacting to trends to predicting the next disruption and adapting ahead of competition—thus, marking the shift from rigid to adaptive business models

Pearltrees Visualizes How You Organize the Web This post is part of Mashable's Spark of Genius series, which highlights a unique feature of startups. If you would like to have your startup considered for inclusion, please see the details here. The series is made possible by Microsoft BizSpark. Sugar Harms Your Brain Health, Drives Alzheimer’s Epidemic By Dr. Joseph Mercola Guest Writer for Wake Up World Alzheimer’s disease, a severe form of dementia, affects an estimated 5.2 million Americans, according to 2013 statistics.[1] One in nine seniors over the age of 65 has Alzheimer’s, and the disease is now thought to be the third leading cause of death in the US, right behind heart disease and cancer.

The End of Education As We Know It By Scott Barry Kaufman Imagine being 6 or 7 years old again, learning about addition and subtraction for the first time. How wonderful would it be, while taking a quiz, to be able to rub a genie’s bottle and choose from a number of on-the-spot metaphors for mathematical concepts, like what a fraction really means?

Pearltrees: a Free, Collaborative Social Library (K-12+) - Best of Digital Learning Interested in #EdTech? The above image is from “Pearltrees,” a free website that serves as a collaborative – and social – library. So how does it work? Exploring the Superconscious Interview with Dr Edward Bynum, author of Dark Light Consciousness Author: Jair Robles We are all familiar with its symbolic representations, be it from the caduceus used by modern medicine, the winged serpent of Prehispanic Mesoamerican cultures or the dragons commonly seen at most Asian celebrations. It is said to represent a dormant energy that lies within every one of us, at the base of the spine, and that when this energy is awakened and driven into the brain it opens up our access to higher states of consciousness and our connection to the divine. Much of the disciplines and practices developed by the ancient traditions and practiced at the mystery schools were geared to this sole purpose.

The Similarities Between Montessori And Digital Learning The Similarities Between The Montessori And Digital Learning by Carri Schneider first appeared on gettingsmart.com “Before elaborating any system of education, we must therefore create a favorable environment that will encourage the flowering of a child’s natural gifts. All that is needed is to remove the obstacles. And this should be the basis of, and point of departure for, all future education.” Pearltrees Goes 1.0, Launches Premium Accounts With Private Collections And Sharing Curation and discovery service Pearltrees just announced the launch of its premium accounts. For $4.99/month or $49.99 per year, Pearltrees users will be able to create private pearls for their bookmarks, notes and pictures. This is also Pearltrees’ 1.0 release and marks the first time that all of the company’s apps offer a fully coherent feature set across the web and mobile.

The app helped me a lot because it allowed me to put a collection inside multiple collections. Also, I can put a website onto it and it shows what the front page looks like with out getting onto it. The bad thing about this app is that it won't let me onto it at school so I have to have a teacher log on for me. It can help me in the future by allowing me to present my work in a different way. by ah008352 Jun 3