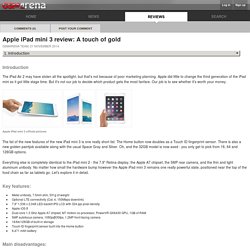 Introduction The iPad Air 2 may have stolen all the spotlight, but that's not because of poor marketing planning. Apple did little to change the third generation of the iPad mini so it got little stage time. Everything you need to know from Apple's iPad and Mac October event. Today we were battered with a ton of awesome announcements from Apple, and if you can't be bothered to comb through them all, we've got the important information here. 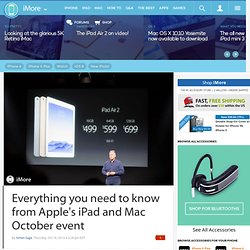 The biggest takeaway from today's event is the announcement of the iPad Air 2. It shaves down the profile to 6.1 mm (for reference, the existing iPad Air is 7.5 mm thick). There's a new 8 megapixel camera inside that's similar to what we're seeing in the iPhone 6 Plus and a dedicated A8X image signal processor to handle timelapse and slow-mo shots.

The front-facing camera has had some great improvements, and lets in 81% more light thanks to a larger aperture. True Skate Trailer iPhone iPad iPhone Touch Android. SwiftKey for iOS review: An Android favorite comes to iPhone and iPad. SwiftKey has been one of the most popular alternative keyboards on Android for years, and one of the best selling apps of all time in Google Play. 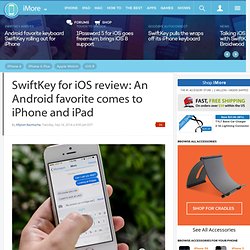 With an incredibly fast and accurate prediction engine, SwiftKey can not only correct misspellings, but make suggestions based on actual context. SwiftKey Flow lets you drag your finger effortlessly across keys in order to form words faster than ever. And with the introduction of iOS 8 and third-party keyboards, SwiftKey brings smarter and more efficient typing right to your iPhone and iPad! Once you've downloaded SwiftKey to your iPhone or iPad, you'll need to install it. This will be the case with all third party keyboards.

Best iPhone camera, photo and video editing apps (2014 edition) The iPhone has evolved to be a fantastic camera, but you can get even more out of it and develop your own photographic style with a few apps handy. 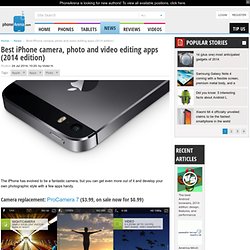 Camera replacement: ProCamera 7 ($3.99, on sale now for $0.99) ProCamera 7 is a surprisingly simple camera app at the surface, that also hides many advanced features in a way that is unobtrusive yet easy to access. Before we jump into them, though, it’s worth pointing out how stable and crash-free this app is, something very important given that even the most popular iPhone camera apps often crash. Best video editing apps for iPad: iMovie, Pinnacle Studio, Videon, and more! The best video editing apps for iPad to help you shoot, edit, and share your movies! 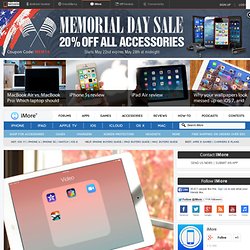 Looking for the best iPad apps for video editing? From basic trimming to adding transitions, titles, and effects, video editing is a breeze on the iPad due to its larger screen real estate. Whether your next video is a montage of your last family vacation or a school project, the App Store has something for everyone. How to block Facebook game requests on iPhone and iPad. If you don't play Candy Crush Saga, or any other Facebook game for that matter, but you keep getting requests for lives and items from your Facebook friends, you're probably past frustrated. 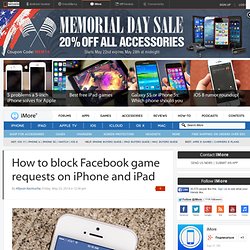 I've even seen some friends delete people or unfollow them simply to stop the never ending stream of game requests. Unfortunately, sometimes people don't realize they're spamming their friends. Luckily, there's an easier way to stop game requests than deleting or unfollowing your friends. How to block all Facebook game and app requests on iPhone and iPad. Since Free Download: iPhone photo editor Since is now free to download. Falling squarely into the “Why didn’t I think of that?!” 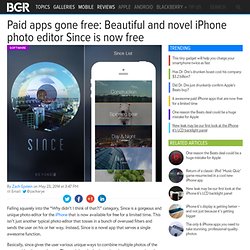 Category, Since is a gorgeous and unique photo editor for the iPhone that is now available for free for a limited time. This isn’t just another typical photo editor that tosses in a bunch of overused filters and sends the user on his or her way. Instead, Since is a novel app that serves a single awesome function.

Basically, since gives the user various unique ways to combine multiple photos of the same subject into one image. The result is a single photo that shows a scene changing over time. From the app’s description: OneKey Pro Free Download: iPhone and iPad app now free to download. It’s time to be blunt: If you’re not using a password manager to help ensure that your online passwords are as secure as possible, you’re crazy. 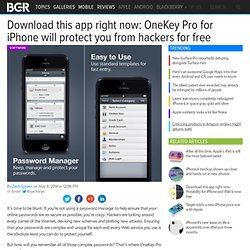 Hackers are lurking around every corner of the Internet, devising new schemes and plotting new attacks. Ensuring that your passwords are complex and unique for each and every Web service you use is the absolute least you can do to protect yourself. But how will you remember all of those complex passwords? That’s where OneKey Pro comes in. Created by app developer Appxy, One Key Pro is a universal iOS app that will work on both the iPhone and the iPad. 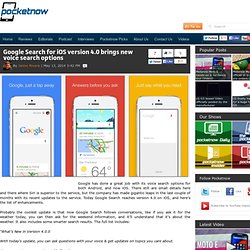 There still are small details here and there where Siri is superior to the service, but the company has made gigantic leaps in the last couple of months with its recent updates to the service. Today Google Search reaches version 4.0 on iOS, and here’s the list of enhancements. Probably the coolest update is that now Google Search follows conversations, like if you ask it for the weather today, you can then ask for the weekend information, and it’ll understand that it’s about the weather. It also includes some smarter search results. 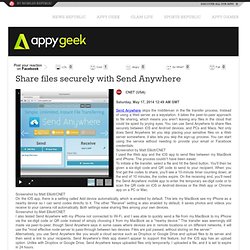 iTunes 11.2.1 review. iTunes 11.2 arrived on Thursday along with Apple's release of a new version of Mavericks (10.9.3). The new version of iTunes has some changes that will be welcome for podcast listeners, along with other enhancements and improvements designed to improve performance and reliability. The initial release also created a bizarre problem involving iCloud's Find My Mac feature and the local /Users folder. On balance iTunes 11.2.1 is an adequate improvements, but iTunes itself is a mess. Podcasting support in iTunes needed a bit of a revamp, and it's finally gotten it in iTunes 11.2. The "Unplayed" tab has been revamped, to make it easier to track down new podcasts you haven't yet heard. iTunes 11.2.1 review. iPad to get split-screen multitasking as part of the iOS 8 update?

As Apple prepares to unveil iOS 8 at WWDC on June 2nd, rumors are flying. 9to5mac wrote this week that the next version of iOS will probably allow multitasking in a split-screen mode. That feature has been touted by Microsoft as an advantage of Windows 8 tablets vs. the iPad. Samsung has also promoted its Mutli-Window feature on Android devices. Secret App Launches in the UK, Ireland, Australia and New Zealand. Secret is launching its anonymous sharing app today in the United Kingdom, Ireland, Australia and New Zealand, marking its first expansion beyond the United States. The iPhone app‘s notoriety has skyrocketed in recent months, as members of the technology industry post gossip – the truth of which is by no means guaranteed – about startups in Silicon Valley and beyond.

There are no names on Secret, making it difficult for anyone deduce who has posted the most recent rumors, or the chances of them being true. The mobile app, however, does tap into users’ address books to disclose whether they know the author, or if they’re a friend of a friend. In that respect, the app isn’t limited to the technology industry – anyone can use it – although the former is where the app appears to have been adopted most strongly. 30 brilliant iOS 7 tips and tricks. Page 1 of 2iOS 7 tips and tricks 1-10 The jury may still be out on iOS 7's radical redesign - for what it's worth we love it, with a few reservations - but there's no denying that it's the friendliest version and most powerful of iOS yet.But there's more to iOS 7 than headline features such as Control Center, Airdrop and iTunes Radio: some of our favourite improvements are little things that make our everyday lives that little bit more pleasant.

These are our favourites - let us know yours in the comments.Check out our iOS 7 review for the full lowdown! 1. Camera: shoot in burst mode. Apple-partner Vimeo revamps its iOS app with new design, faster video loading. Vimeo has updated its iPhone, iPad, and iPod touch application with a new, lighter design as well as some helpful new features.

Review: TodoMovies 3 – Manage and discover new movies in a great free app. Lil Smasher Review. If you’ve ever wanted to play a game that’ll bring out the gremlin in you, this one will probably suffice. iDrive lowers iPad 50GB backup cloud storage deal to .99 cents / year. Best iPhone and iPad apps of the week. Musx is a handy music sharing app for iPhone. Marvel’s iPhone App Turns Sketches Into Tappable Mobile App “Prototypes” How to save Google Maps offline on iOS and Android devices. Google has just rolled out a major Google Maps update for mobile devices, available to both iOS and Android users, which brings several interesting features, including the ability to save maps offline in order to access them later without needing an Internet connection.

PhoneArena has put together a quick guide on how to save offline maps on Android devices, although the same procedure is available to iOS users as well. OneKey Pro Free Download: iPhone and iPad app now free to download. How to Get Started With Microsoft Office On iPad. Now that Microsoft Office is available on the iPad, it's a runaway hit: The three apps in the mobile productivity suite are sitting solidly at the very top ranks of Apple’s App Store. APPY Geek. The lowdown on Lowdown: The iPhone app for smarter meetings.

Reactr for iOS lets you share a photo or video and get a quick reaction. Litely looks to improve mobile photo editing by focusing on simplicity. Direct File & Screen Sharing for iPad and Android tablets. WeTransfer arrives for iOS allowing you to send up to 10GB of photos or videos in one go. Weekend App: Handy Photo Free is a capable iOS image editor with a couple of unique features.