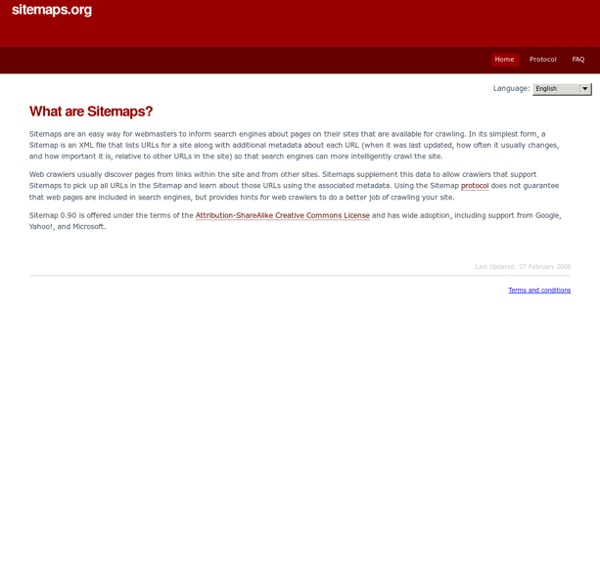 Language: Sitemaps are an easy way for webmasters to inform search engines about pages on their sites that are available for crawling. In its simplest form, a Sitemap is an XML file that lists URLs for a site along with additional metadata about each URL (when it was last updated, how often it usually changes, and how important it is, relative to other URLs in the site) so that search engines can more intelligently crawl the site. Web crawlers usually discover pages from links within the site and from other sites. Sitemaps supplement this data to allow crawlers that support Sitemaps to pick up all URLs in the Sitemap and learn about those URLs using the associated metadata. Using the Sitemap protocol does not guarantee that web pages are included in search engines, but provides hints for web crawlers to do a better job of crawling your site.

10 Search Engines to Explore the Invisible Web No, it’s not Spiderman’s latest web slinging tool but something that’s more real world. Like the World Wide Web. The Invisible Web refers to the part of the WWW that’s not indexed by the search engines. Most of us think that that search powerhouses like Google and Bing are like the Great Oracle”¦they see everything.

Ping: ICMP vs. ARP Network and system administrators are well-versed in using the ping utility for troubleshooting purposes, but where do you turn when ping doesn't do the trick? Pinging a host is usually the first step in determining if the host is properly connected to the network. If the host does not respond to a ping request, the host is usually assumed to be offline. Google Ranking Factors: The Complete List You probably already know that Google uses about 200 ranking factors in their algorithm… But what the heck are they? Well today you’re in for a treat because I’ve put together a complete list. Some are proven. Some are controversial. Others are SEO nerd speculation.

Me Broad pronouncement of the week: We are entitled brats. For immediate proof, turn on the television. Locate a reality show on Bravo or MTV. The Time To Embrace Semantic Search & Dominate The Knowledge Graph Is Right Now! We still suffer from the common cold! Decades of medical research and development haven’t destroyed the influenza virus. It evolves, adapts and improves. Cmgsi Certified Site Metrics are metrics that are directly-measured from the website instead of estimated. The website owner has installed an Alexa Certify Code on the pages of their site and chosen to show the metrics publicly. For the website owner Certified Metrics provide: A more accurate Alexa RankA private metrics Dashboard for On-Site AnalyticsThe ability to publish unique visitor and pageview counts if desired

Common Errors in English Go to list of errors. What is an error in English? The concept of language errors is a fuzzy one. I’ll leave to linguists the technical definitions. Here we’re concerned only with deviations from the standard use of English as judged by sophisticated users such as professional writers, editors, teachers, and literate executives and personnel officers. The aim of this site is to help you avoid low grades, lost employment opportunities, lost business, and titters of amusement at the way you write or speak.

Will Google Game the System against Natural Health? For years, Wikipedia has been a prime source of misinformation (or perhaps disinformation) about natural health. Now we worry about what Google is up to. Action Alert! Our reading of Wikipedia coverage of natural health is that at some point it was captured by interests very hostile to it, as we discussed in depth five years ago. The result is material about integrative doctors and therapies that strikes us not only as highly inaccurate but in some cases libelous. Much of this commentary presents itself as “science.”