INTO THE FASHION: Cultural Influences On Trend Forecasting 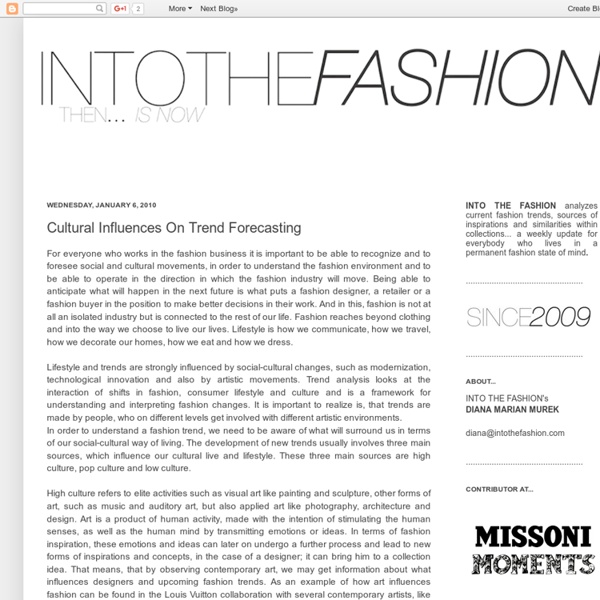 For everyone who works in the fashion business it is important to be able to recognize and to foresee social and cultural movements, in order to understand the fashion environment and to be able to operate in the direction in which the fashion industry will move. Being able to anticipate what will happen in the next future is what puts a fashion designer, a retailer or a fashion buyer in the position to make better decisions in their work. And in this, fashion is not at all an isolated industry but is connected to the rest of our life. Fashion reaches beyond clothing and into the way we choose to live our lives. Lifestyle is how we communicate, how we travel, how we decorate our homes, how we eat and how we dress. Lifestyle and trends are strongly influenced by social-cultural changes, such as modernization, technological innovation and also by artistic movements. Popular culture, or pop culture, is a cultural section, which is followed, understood and appreciated by a larger audience.

Mobos 2016: A look at the resurgence of grime as Skepta and Kano dominate nominations Ten years ago, it would have been unfathomable that grime collective Boy Better Know could headline a major music festival like London's Wireless. Well, that is exactly what happened in July 2016, proving just how prominent the grime genre has become – again – over the last year. As the Mobo Awards 2016 prepare to get underway, IBTimes UK looks back at how the tough-as-nails genre was able to rise from the ashes. Any youngster with a passion for British music will undoubtedly cite Skepta as one of their standout artists of 2016.

Experimentation - Social Influence Social influence is a part of our everyday life but we rarely notice it. On television, in the newspapers, and in fact in every publicity poster there is social influence at work. Publicity is a constant part of our lives and to a certain extent it is a ruler of our tastes, behaviours and opinions. We all like specific clothes, foods and drinks, we all have strong opinions on subjects like education or the economy but do we really understand how much of our opinions, tastes, and behaviours are our own and how many of them are simply influence by others?

How art and fashion became BFFs Givenchy and Marina Abramovic When Jay-Z staged the Picasso Baby gallery setup for his "performance art film" (aka video) back in August, Marina Abramovic was one of the first through the door. The 66-year-old performance artist is a favourite of fashion's power players – and it's nothing to do with the episode of Sex and the City she inspired or, if we're honest, any of her art. Abramovic is one of Givenchy designer Riccardo Tisci's muses and regularly wears his clothes accessorised with red lipstick and a long plait in a rather fabulous way.

Art and Fashion: The Ultimate Collaborations The worlds of art and fashion are long intertwined; from Elsa Schiaparelli's collaborations with Salvador Dalí and Jackson Pollock's with Cecil Beaton, all the way through to Louis Vuitton with The Chapman Brothers and Prada with Elmgreen + Dragset. To celebrate the interaction between the two disciplines, fashion historian E.P. Cutler has compiled 25 of the most influential pairings and published a book, aptly titled Art + Fashion: Collaborations and Connections Between Icons, which explores creative relationships past and present. What Technology Will Look Like In Five Years Diomedes KastanisCrunch Network Contributor Diomedes Kastanis head of technology for business unit support systems, leading Ericsson’s long-term technology vision and innovation across media, OSS, BSS and m-commerce. How to join the network As a driver of technical innovation for a software company, a huge part of my job depends on forecasting how current tech trends will play out, merge, dissipate or expand. Here are some of my predictions of what the world will look like in 2020. Revised Notions Of Ownership

Stormzy: ‘My man Jeremy Corbyn! I dig what he says' Before Stormzy became the most talked-about new rapper in the UK, before Adele was shouting him out on stage, before he was the odds-on favourite to record England’s official Euro 2016 song, he was Michael Omari, a kid who lived for badges. Omari would spend school holidays in Thornton Heath library in Croydon, which ran a scheme called Book Trail. “You read a book, write a detailed review as proof you’ve read it and they give you a badge,” the MC explains. “That’s where my competitive nature came out. Give me the badges! I would sit in the library all day, not ’cos I loved reading, just because I needed those badges.”

The rise of discreet luxury and a new consumer elite There was a time when luxury was all about displaying elitism through logos and labels. Now, however, there is a shift toward consumers finding subtler ways of "showing off". Moreover, with only one in six saying they like the expensive items that they buy to feature prominent brand names, perhaps the age of logo fatigue is upon us. It became clear that it was time to sit up and take notice when that bastion of the signature motif, Louis Vuitton, ran an ad campaign in China – one of the territories frequently cited as still worshipping at the altar of upmarket bling – that carried no branding at all.

Where Is the Line Between Fashion and Art? Schiaparelli's famous shoe hat. Image: Getty While the mingling of the art and fashion worlds is not a modern concept, the visibility of fashion and art crossover seems to be at an all high. The spectacle and sensation created by collaboration among creative forces inspires fashion houses to seek out contemporary artists for runway shows, capsule collections, or as commissioned filmmakers. West Africans are ditching Dutch wax prints for Chinese made copies of material like Vlisco's — Quartz Since the early 20th century, Vlisco has produced African print cloth—otherwise known as Dutch wax prints. This vibrantly colored and intricately patterned fabric dominates West African markets and is globally recognized as quintessentially “African.” Ironically, this iconic bold cloth was originally forged by Dutch colonial companies attempting to mechanically reproduce handmade Javanese batik cloth. When this failed to take off in Southeast Asia, Dutch traders began to sell the cloth in West African markets. The patterns were modified to fit local tastes and quickly became popular. The rise of mass-produced, Dutch wax prints partially displaced domestic textiles, which lacked the colorfastness and material lightness that ultimately made wax prints an essential everyday consumer good.

how does social media shape our perception of beauty? A male friend of mine who considers himself "big on Tinder" claims the winning five photo formula is this: front-on photo, side profile photo, photo showing teeth, body photo and height photo, involving a casual scale prop such as Kylie Minogue. If you're not better looking on Tinder than in real life, you have failed. It's the most gratifying, terrifying, humanity-destroying platform ever created. But then again it's responsible for actually quite a lot of nice loving relationships… While Tinder must be the worst offender, the impact of social media on perceptions of beauty is inevitably positive and negative, depending on which way you look. You might meet the love of your life through tactful photo-editing, you might feel terrible forever, or you might be one of the mental few to enter hyperreality, transcending your human form into… well this… Of course, it's all a matter of perspective.

Stormzy: the 22-year-old grime spent time with GQ to talk about grime taking over the music industry A battle cry resonates across the car park. A mob of school kids hurtles towards the stationary, blacked-out Audi A5 like iron filings to a magnet, their eyes wide and white. Greedy hands snake through the windows. "We can smell it! L'Oréal Buys Magic, Cath Kidston Expands, Adidas' Local Strategy, Luxury Handbags as Collateral - The Business of Fashion “L’Oréal To Buy Magic Holdings International For $843 Million” (Bloomberg) “The acquisition gives L’Oréal the top-selling facial mask brand in China, where beauty and personal-care product sales will expand 8 percent to $34 billion this year, according to Euromonitor estimates. Magic has 288 distributors in 32 provinces and regions in China, according to its website. ‘This should allow L’Oréal to accelerate the growth of its own brands in China through a greater distribution reach,’ said Chas Manso de Zuniga, an analyst at Société Générale SA.” “Cath Kidston Takes On Its Floral Patterns To China” (Financial Times) “Cath Kidston, the floral-focused British retailer, has more stores abroad than in the UK after it opened outlets in China.

Art and Fashion: The Mutual Appreciation Society WE THINK OF ART appreciation as erudite, but an interest in fashion is considered airheaded. When an art-lover buys art, it's called "collecting." When a fashion enthusiast buys clothing, it's called "shopping." Art is supposed to be timeless and important, while fashion is understood to be ephemeral and frivolous. Despite this much-litigated list of ontological differences between art and fashion, the two are cross-pollinating more than ever.

Oasis x V&A Collection shop now: Laura Jackson models range Now that garden party season is finally upon us (we can see a teeny tiny bit of sun behind those clouds, honest) it's time to shop for some new outfits. Our first stop: Oasis. Why? Because Oasis has teamed up with the V&A Museum for an exclusive capsule fashion collection.