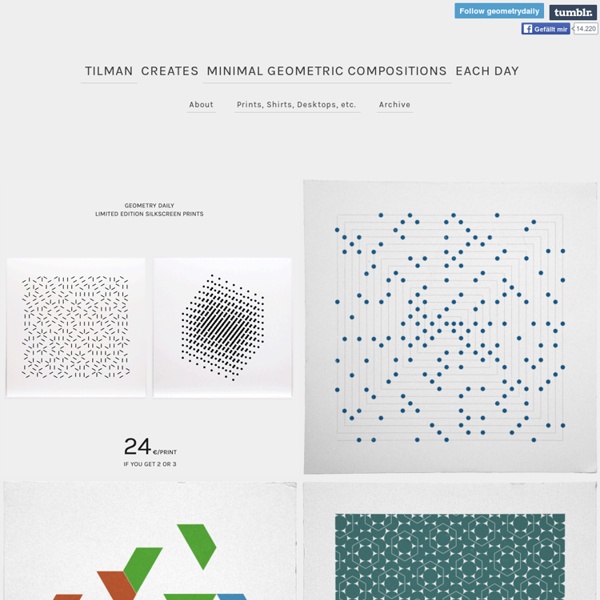 grasshopper As a way to explore the potential of Rhino Grasshopper, I started working on a series of milled panels. Each panel varies through the use of a few simple variables (grasshopper uses slider bars). These values are fed to a random number generator so the behavior is somewhat unpredictable. Airless Bike Tires Mean Cyclists Will Never Get A Flat Again Britek Tire and Rubber has been developing an airless tire that can eliminate flats and convert stored energy into forward momentum. The Energy Return Wheel (ERW) has an internal rubber layer, which is stretched and held taut by adjustable rods. Gizmag reports that the tire features a rubber tread on the outside, and a series of elastic cushions in the space between. The bicycle tire also has lightweight 29-inch carbon fiber rims, and is open on the sides.

Grasshopper Quotidien Grasshopper Diffusion Limited Aggregation Auxin Flux CanalisationANALYSIS: Mesh Solar Incidence A Design with Legs: the House in a Suitcase Comes 'Round Again © Eva Prats and Ricardo Flore In 1996, Barcelona architects Eva Prats and Ricardo Flores built their wonderful Casa En Una Maleta, or House in a Suitcase, in a 293 square foot apartment. They wrote: The project investigates minimum space in our daily activities; the pieces of furniture open according to each moment of the day. Thus, the unique space of the room 9x3x3 metres varies in size and use during the everyday activities.

Converting Construction Sites into Public Spaces This post is also available in: Chinese (Traditional) No one would ever think of enjoying the space within construction scaffolding (or sidewalk sheds). But, in New York City, they are so prevalent (stretching 189 miles if lined end to end), that students from the Parsons School of Design created Soft Walks - simple DIY kits with chair pieces, a counter, a light fixture, a planter, and a green trellis that anyone can pick up and install onto the beams of their nearest scaffolded area. The initiative aims to transform nearly 6,000 construction sites, equaling 189 miles of covered sidewalk. Soft Walks transform construction scaffolding from a dark, covered walkway into a rest stop for busy city dwellers to stop and have a seat, or even eat and socialize. Softwalks recently won the Student Category of Fast Company’s Innovation By Design Award.

Behind the scenes: visualizing debates on Wikipedia How consensus on wikipedia is reached? During the 2013 DensityDesign course, a group of students was analyzing the different positions on the abortion as family planning method. To identify how persons with different positions interact, part of their work focused on the italian Wikipedia page “Dibattito sull’Aborto” (Abortion Debate). Designer_Visits Monday, 24 June 2013 by Irene Hoofs An illustrator and publisher of ‘Kleursprookjes’ (Colour Fairy Tales) Caroline Ellerbeck lives with Gilles and her three children Luuk (9), Fien (5), Flores (2) on a ground floor apartment (from the nineteen twenties) in Rotterdam West. Seven years ago Caroline and Gilles bought this ground floor apartment in the New West part of Rotterdam.

6 Startup Lessons From Designers At Pinterest, Fuseproject, And Behance In 2011, over 60 designers started the Designer Fund, to give angel funding, mentorship, and connections to designers creating businesses with positive social impact. We believe that designers should be part of the DNA of companies from the beginning and partner with business and technology cofounders to build great products, user experiences, and a culture of innovation for the long run. That core principle has informed our Designer Founders book series, which includes interviews with designers about the path they took to create tech startups. Our goal with this project is for designers around the world to find inspiration in role models who have successfully taken the journey from designer to founder.

Explode_BReps @ UVa To learn more about using Grasshopper as an analytic tool in conjunction with other forms of data, please visit our sister site DATA ANIMAL Like this: Like Loading... FoldaRap FoldaRap2 Release status: working In my obsession dreaming of a folding RepRap, I finally started to make one, after 5-7 months of development I'm able to travel with it around the town/country/world :) (adventures pictured on flickr / youtube / ustream) And now several people have build one : FoldaRap_Hall-of-Builds, even some by sourcing themselves the parts : google-maps (the red dots) Specifications Printed Parts: 33 Non-Printed Parts: 285 (including every bolts/nuts/washers/ferules/etc.)

L'IMPARFAITE Numéro 5, mai 2013 — Avec Estelle Hanania, Codex Manesse , Playnight , Tanja Ostojic, Vols de sexe , Les derniers nudistes , Sasha Kurmaz, Kink , William Higgins, Oïkema , Chester Brown, Thomas Hauser, Elvifrance , Christy Hartburg, Zombie Love , Mathieu Gargam Commander Pre Rationalisation of Free form Facades Do you think a model or methodology flowchart for pre-rationalization of free-form facades could be a great help for designing architectural envelopes and facades? This Model would include a series of decisions you can make while forming a facade and it would give you an overall limits in manufacturing industry to prevent over optimism of building technology. The model would lay out different types of glass and their manufacturing limitations, initial idea of connections and performance. The visual chart would give a good idea of what you want, what can be achieved and what will be their outcomes.