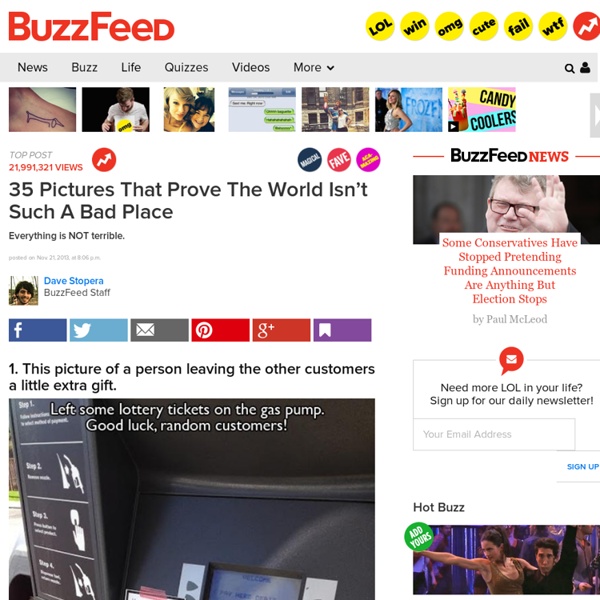 Related:  Us doing well for all

'Tips For Jesus' Shows Outrageous Christian Generosity Restaurant servers have demanding jobs, generally working long hours with low pay and little reward. They often depend on their tips in order to survive. That's why it's disheartening to see stories like that of Pastor Alois Bell, who wrote on her receipt to her waitress, "I give God 10% why do you get 18." But 'Tips For Jesus' is on a mission to show the world what Christian generosity is supposed to look like. Spanning the country from California to Utah, 'Tips For Jesus' has been leaving outrageously generous tips for delighted servers. People have been wondering about what sparked this incredible show of charity. Though the person or people behind 'Tips For Jesus' remain anonymous, their ethos is strikingly similar to the words of Justin Lee, who wrote in a blog responding to Pastor Bell's rude note, "Remember, my fellow Christians: Whatever you do, wherever you go, whenever you tip, you are representing Jesus." Amen! Also on HuffPost:

L’actu en patates - Blog LeMonde.fr The San Francisco Globe Needless to say, after seeing this, your faith in humanity will be restored. The question is -- can all of us act in such a way when the time comes? 1. 2. 3. 5. 7. 8. 9. 10. 11. 17. 18. 20. 21. 22. 82 year old barber does his job at local park... What does he charge? 23. He gave up a career track he trained for over 8 years. 24. 25. ..and he goes for the rescue! 27. 29. 30. 32. 33. 34. 35. 36. 37. Fishermen Jason Vonick, Nick Segal, John Oakes Spend Hours Rescuing Trapped Killer Whale In Alaska When three fishermen spotted a killer whale stuck on the rocks in Klakas Inlet in Alaska, they devoted nearly four hours to saving her. Jason Vonick, Nick Segal, and John Oakes, from Ketchikan, Alaska, made the rescue on Sept. 30, according to ABC News. To pull the whole thing off, the men had to anchor their fishing vessel and bring a smaller, 15-foot boat out to the rocks where the female orca lay. "As soon as... we realized we actually could move her a little bit, we just did what we had to, really grunt, groan, and put some sweat into it," the men told RightThisMinute.com. Vonick captured portions of the rescue on camera and posted a 4-minute clip to YouTube on Saturday. The group's combined patience and determination make for one incredible video. "[The whale] never fought us," Vonick later told the news station. Also on HuffPost:

Gaetano Acerra, Police Officer, Gives Troubled Teen New Bedroom Furniture -- And Friendship A touching act of kindness in a small town is now being seen around the world -- and it started with this Facebook post: Sumter, S.C., police officer Gaetano Acerra reached out to Cameron Simmons, 13, after the boy called police following a fight with his mother. Simmons told the officer he didn't want to live there anymore. Acerra learned Simmons suffered from back pain because he slept on an air mattress that deflated during the night. "My heart went out for him," Acerra told the station. So Acerra returned a few weeks later with a bed, a desk, a chair and a television. He also gave the kid something far more important: friendship. "I didn't do this for publicity or to get people to notice me," Acerra told WIS.

Commuters Push Train To Free Trapped Passenger In Perth, Australia A passenger on a commuter railroad near Perth, Australia, was rescued by his fellow passengers after he slipped and got his leg caught in the gap between the train door and the platform -- and the entire scene was caught on video. "He stood in the doorway and as he was sort of taking up his position there, one leg slipped outside the door, slipped outside the gap and he was stuck," Transperth spokesman David Hynes told ABC Australia. Hynes said the driver was told not to move the train as passengers and staff got to work. "Then our staff who were there at the time got the passengers, and there were lots of them, off the train, and organized them to sort of rock, tilt the train backwards away from the platform so they were able to get him out and rescue him." Watch the video, above, to see a perfect example of how a little teamwork can save the day. One of the passengers, Nicolas Taylor, shared this photo on Twitter: Other images from the rescue were also being passed around social media:

Give Manning and Snowden the Nobel Peace Prize In an op-ed for the Guardian earlier this summer, Máiread Corrigan Maguire, an Irish activist who won the Nobel Peace Prize in 1976 and has devoted her life to working for peace in Northern Ireland and around the world, explained why she is nominating Bradley Manning for this year’s prize. American activist and journalist Norman Solomon followed up on this in a USA Today article this week, just after Manning’s conviction on espionage charges. Solomon announced that he will go to Oslo with a petition signed by more than 100,000 people urging the Nobel committee to award Manning the peace prize. I think it’s a great idea, and if the Nobel committee weren’t so cautious and lily-livered – and were actually interested in furthering the cause of peace – it might actually happen. Can you even imagine how outraged, how red-faced and apoplectic, John McCain and Lindsey Graham and Dianne Feinstein and the talking heads on the Sunday news shows would be?

10 Most Generous Tips in the World Pizza Hut Waitress Receives $10,000 Tip, Goes to College Talk about extra toppings! Jessica Osborne, a 20-year-old Pizza Hut employee in Angola, Indiana got a life-changing tip of $10,000 from a regular customer who gave her name only as “Becky.” Cop Splits $1 Lottery Ticket With Waitress, They Win $6 Million It did happen, but not like this... This is probably the most famous generous tip of all. $12,000 Tip or Drug Money? Here's one of the more unusual tipping stories we've seen. Waitress Receives $1,000 Tip on $60.42 for a Trip to Italy Chalk one up for “random acts of kindness.” The story went viral, even though its scant details make it hard to actually prove. Waiter Gets $5,000 Tip on $26, Replaces Damaged Car Greg Rubar, a Houston waiter at D'Amico's Italian Market Cafe, had his lucky day on May 26, 2012. Johnny Depp's $4,000 Tip Here's a tip... don't mention The Lone Ranger. One famously generous celebrity tipper is Johnny Depp, star of many huge blockbusters (as well as flops).

'Aaron's Last Wish': Man Gives Servers $500 Tips To Honor His Late Brother (VIDEOS) Last year, Seth Collins set out to give $500 tips to waiters and waitresses in all 50 states. So far, he's given out 54 tips. He hopes to reach 100. Collins, from Lexington, Ky., made the goal to honor his late brother, Aaron Collins, who in his will instructed the family to leave "an awesome tip." "And I don't meant [a 25% tip]," he specified. "I mean $500 on a f***ing pizza for a waiter or waitress." The 29-year-old passed away just three weeks shy of his 30th birthday, but his wish endures. After the video of Seth Collins giving out the $500 tip went viral, the Collins family set out to keep the tradition going. They solicited donations in Aaron's honor, and in just one month, they raised more than $30,000. Each surprising tip has also helped the Collins family cope with their loss. "Most people, when they lose a loved one, their family grieves with them, their friends grieve with them, and we've had the whole world to grieve with us," Tina Collins, Aaron and Seth's mother, told LEX 18.

12-year-old Food Grower Donates 2 Tonnes of Vegetables to Homeless The world balances itself out, to a degree – while the police swoop on homeless people and take their sleeping bags and food off them, or arrest them for dumpster diving, decent-natured people donate their home-grown food to them. Let’s hope the latter type of people outnumber the former. When Katie Stagliano, from South Carolina, was just nine years old, she planted a cabbage seedling that grew to change her life. In fact, when it weighed an astounding two-and-a-half stone, she knew it was destined for greater things than her own kitchen. Now 12 years old, Katie has donated around 2,000kg of fresh food since her operation started.

Related:
Related:  Us doing well for all