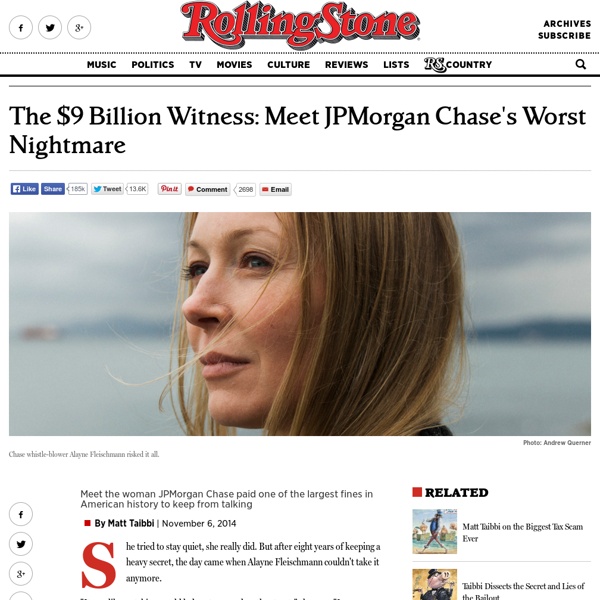 She tried to stay quiet, she really did. But after eight years of keeping a heavy secret, the day came when Alayne Fleischmann couldn't take it anymore. "It was like watching an old lady get mugged on the street," she says. "I thought, 'I can't sit by any longer.'" Fleischmann is a tall, thin, quick-witted securities lawyer in her late thirties, with long blond hair, pale-blue eyes and an infectious sense of humor that has survived some very tough times. She's had to struggle to find work despite some striking skills and qualifications, a common symptom of a not-so-common condition called being a whistle-blower. Featured News From Fleischmann is the central witness in one of the biggest cases of white-collar crime in American history, possessing secrets that JPMorgan Chase CEO Jamie Dimon late last year paid $9 billion (not $13 billion as regularly reported – more on that later) to keep the public from hearing. Thanks to a confidentiality agreement, she's kept her mouth shut since then.

White House: Obama Sees ‘Emperor’ Label As ‘Badge Of Honor’ Reporters grill Press Secretary, ask if Obama sees himself as ‘King’Steve Watson Prisonplanet.com November 20, 2014 In a remarkable exchange, White House Press Secretary Josh Earnest told gathered reporters Wednesday that President Obama looks upon being criticised as an ‘emperor’ as “a badge of honor”. Responding to a question regarding Republican criticism of Obama’s executive amnesty plans, Earnest said “We’ve heard this rhetoric for some time.” “Their most recent statement referred to ‘Emperor Obama,’” Earnest said, adding “The fact is the president is somebody who is willing to examine the law, review the law and use every element of that law to make progress for the American people and that’s a criticism the president wears with badge of honor.”

Ordering The Vegetarian Meal? There’s More Animal Blood On Your Hands Please note: the author of this article is Australian, and much of the information in the following article applies specifically to that area of the world. Farming practises differ around the globe. The ethics of eating red meat have been grilled recently by critics who question its consequences for environmental health and animal welfare. But if you want to minimise animal suffering and promote more sustainable agriculture, adopting a vegetarian diet might be the worst possible thing you could do. Renowned ethicist Peter Singer says if there is a range of ways of feeding ourselves, we should choose the way that causes the least unnecessary harm to animals. Most animal rights advocates say this means we should eat plants rather than animals.

Lasting Relationships Rely On 2 Traits Gottman wanted to know more about how the masters created that culture of love and intimacy, and how the disasters squashed it. In a follow-up study in 1990, he designed a lab on the University of Washington campus to look like a beautiful bed-and-breakfast retreat. He invited 130 newlywed couples to spend the day at this retreat and watched them as they did what couples normally do on vacation: cook, clean, listen to music, eat, chat, and hang out. And Gottman made a crucial discovery in this study—one that gets at the heart of why some relationships thrive while others languish. Throughout the day, partners would make requests for connection, what Gottman calls “bids.” For example, say that the husband is a bird enthusiast and notices a goldfinch fly across the yard.

Law Lets I.R.S. Seize Accounts on Suspicion, No Crime Required Photo ARNOLDS PARK, Iowa — For almost 40 years, Carole Hinders has dished out Mexican specialties at her modest cash-only restaurant. For just as long, she deposited the earnings at a small bank branch a block away — until last year, when two tax agents knocked on her door and informed her that they had seized her checking account, almost $33,000. The agents did not accuse Ms. Hinders of money laundering or cheating on her taxes — in fact, she has not been charged with any crime. 29 Things People From Seattle Have To Explain To Out-Of-Towners 1. Seahawk Fans Are Factually The Best Source: Seattle Seahawks Facebook Other cities can claim to be the best NFL fans all they want, but Seattle has proof. City Stealing From Citizens By Tampering With Traffic Lights, page 1 originally posted by: smithjustinb a reply to: Swills It is despicable that the people were milked in this way. But it is an equally despicable concept that taxes should be higher for people who make more and lower for people who make less. America is a capitalist nation. Not a socialist one. Capitalism has made our country great. We don't need these socialist policies to destroy our country and weaken our motivation to continue to be great.

The Racial Dot Map: One Dot Per Person for the Entire U.S. Terms of Use Add Map Labels Remove Color-Coding Mises Institute The political class breathed a sigh of relief Saturday when the US Senate averted a government shutdown by passing the $1.1 trillion omnibus spending bill. This year’s omnibus resembles omnibuses of Christmas past in that it was drafted in secret, was full of special interest deals and disguised spending increases, and was voted on before most members could read it. The debate over the omnibus may have made for entertaining political theater, but the outcome was never in doubt. Most House and Senate members are so terrified of another government shutdown that they would rather vote for a 1,774-page bill they have not read than risk even a one or two-day government shutdown. Those who voted for the omnibus to avoid a shutdown fail to grasp that the consequences of blindly expanding government are far worse than the consequences of a temporary government shutdown. Second on the chopping block should be the Internal Revenue Service.

Worst SF Decisions You make great decisions all of the time, starting with the fact that you live in San Francisco. But c'mon, admit it: you make some terrible ones as well. Hopefully, none of them are these: Flickr/Shando Darby