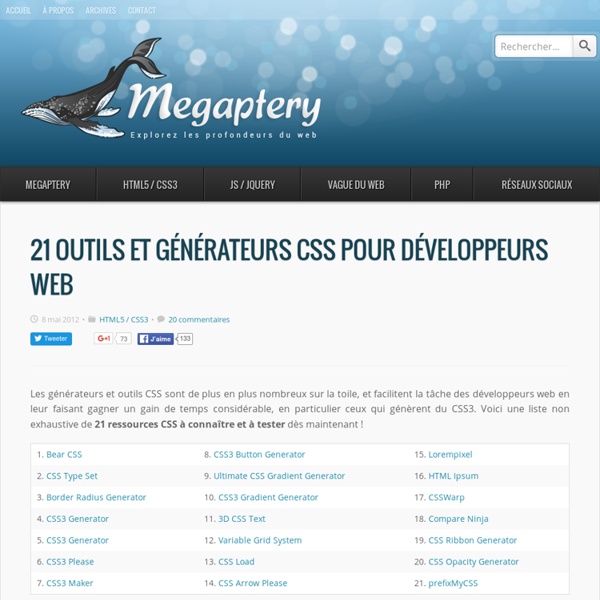 CSS Refreshers: Borders Sure, we’re all familiar with borders. Is there anything new that could possibly be introduced? Well, I bet there’s quite a few things in this article that you never knew about! Not only can CSS3 be used to create rounded corners, but plain-ole' CSS can also be wrestled into displaying custom shapes. 10 Common WordPress Theme Issues & How To Fix Them There are thousands of forum posts opened everyday not only on WordPress.org but also on other forums and of course nearly every theme developer’s support site regarding very common issues that can be solved very quickly and easily. I’m sure theme developers and community members are pretty bored of answering these questions over and over again, so I’ve decided to write the following post which addresses some of the most common WordPress theme issues so you can bookmark it and have it ready at your disposal. 1. Stylesheet Is Missing You’ve just downloaded or purchased a super awesome theme and you go to install it and see the lovely message below: Well your first thought might be…

How to Create (Animated) Text Fills A tutorial on how to create various types of (animated) fills and strokes for text using different techniques including CSS and SVG. View demo Download source I like to think that the future is already here. We have already so many exciting possibilities in CSS and SVG that some time ago we could only dream about. For example, we now have many possible ways to create text with an animated fill! About a year ago the article Techniques for creating textured text by Sara Soueidan was published here on Codrops. Balsamiq Take a second. Let it sink in. The first impression might be disorienting. There are very few interface elements on the screen. Start exploring however, and you'll find out that Mockups is filled with powerful yet only-visible-when-you-need-them features. Getting your ideas out should be effortless.

100+ Awesome Web Development Tools and Resources The best and worst thing about being a web developer is that the web is constantly changing. While this is exciting it also means that web developers must always be proactive about learning new techniques or programming languages, adapting to changes, and be willing and eager to accept new challenges. This could include tasks such as adapting existing frameworks to meet business requirements, testing a website to identify technical problems, or optimizing and scaling a site to better perform with the back-end infrastructure. We thought we would compile a comprehensive list of web development tools and resources that can help you be more productive, stay informed, and become a better developer.

The No-Pressure Introduction to CSS3 It's difficult to escape the hype surrounding CSS3 at the moment, yet it has created a divide in the community. If you read any blog post on the subject and it is flooded with comments by developers who feel they still cannot use CSS3 in their work. Rather than being encouraging the responses from the experts in our community can appear as aggressive and superior. Although they are correct in saying CSS3 can be used now, the decision must still fall to the individual, even if their opinions are based on inaccurate assumptions. In this article I'll try to cover some of the more widely adopted CSS3 advancements, showing you not only how to use them but also the support you will likely expect from the major browsers. Why We Can Use CSS3 Now

The top 25 responsive web design tools Over the past few years we've seen an explosion of web-enabled devices with varying resolutions, capabilities, form factors, pixel densities, interaction methods and more. This onslaught of connected devices is just the beginning, and we're bound to see people accessing the web from a greater number of devices in the coming years. It's futile to create a dedicated web experience for every single device class out there, and the need to create a smart, flexible, adaptable web experiences is becoming more apparent every day. Responsive/adaptive/multi-device web design (whatever you want to call it) is here to stay. Just because responsive design is becoming necessary doesn't mean it's easy.

CSS Zen Garden: The Beauty of CSS Design So What is This About? There is a continuing need to show the power of CSS. The Zen Garden aims to excite, inspire, and encourage participation. To begin, view some of the existing designs in the list. Clicking on any one will load the style sheet into this very page. BookBlock: A Content Flip Plugin A jQuery plugin that will create a booklet-like component that let's you navigate through its items by flipping the pages. View demo Download source BookBlock is a plugin that can be used for creating booklet-like components that allow a “page flip” navigation.