30 Most Ridiculous Doodles on Drawing Something 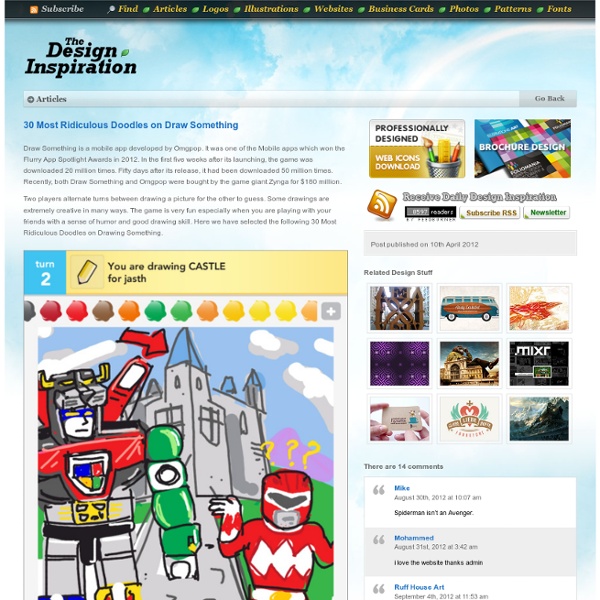 Draw Something is a mobile app developed by Omgpop. It was one of the Mobile apps which won the Flurry App Spotlight Awards in 2012. In the first five weeks after its launching, the game was downloaded 20 million times. Fifty days after its release, it had been downloaded 50 million times. Recently, both Draw Something and Omgpop were bought by the game giant Zynga for $180 million. Two players alternate turns between drawing a picture for the other to guess. I know I put my Megazord around here somewhere… Megaman has this easy. Love(bug) conquers all. Leave it to Russel to always be prepared with a compass. Hey chain chomp! This takes sibling rivalry to a whole other level. I think I’m tapped out on Star Wars clues. I like how Donkey Kong is professional enough to wear a tie despite having a job of primarily manual labor One small step for toys … One giant leap for toykind… Just glad I didn’t step on that tootsie roll. Who needs a surgeon when you got Dr. Dad-gum! Itadakimasu!

Design Seeds®: For All Who Love Color #d9e8c3 #ced181 #7c8f50 #555e32 #bf867c How To Draw "How to Draw" is a collection of tutorials that will teach you everything from perspective basics to shading chrome. Never picked up a pencil before? Fear not! From simple line drawings to modern art and easy animations, we've got you covered. All projects come from Instructables.com and contain pictures for each step so you can start your masterpiece today! Instructables is the most popular project-sharing community on the Internet.

Underwater Hotel in Dubai Designers have developed a very amazing plan for the new hotel, where one part of the hotel will be submerged under the water. This project will be probably brought to life very soon and it will amaze every guest, especially guest who whant to see some crazy high-tech, they can all find that in Dubai. Very cool idea!

If Dogs Could Send Text Mails "Text From Dog" is an excellent set of fake SMS messages exchanged between a dog and his boss. Share Colored Vintage Paper: Texture Pack This free set of 20 vintage/aged paper textures contains textures that are each 3600x3600px in size, high-resolution, and in JPG format. I use textures a lot in my illustrations and in my tutorials, so I made a variety of colors so that I would have a library to choose from. Now, I’m sharing them with you. Use these textures as backgrounds or for adding textured elements in your designs, illustrations, photos, and so forth. Preview Colored Vintage Paper Texture 01 (Aqua) Anamorphic Drawings: Hidden Images Revealed Fresh Visual Daily Anamorphic Drawings: Hidden Images Revealed Thursday 03.10.2011 , Posted by Paul Caridad Picturesque of Green Tsunami from Moravia Here you will find a selection of stunning photos from the Polish photographers Kedrovsky Marek and Krystof Brovko, Green Hills form the amazing waves, which from some angles look like a great green tsunami, check out the amazing beauty… Moravia – the historical region of the Czech Republic to the east of the Czech Republic. This is the edge of the meadow forests, vineyards and fertile fields. This land, once bore the name of Great Moravia, famous for its rich history and folklore traditions, and became the trademark green fields, stretching beyond the horizon. It is not surprising that this wonderful region of cultivated vineyards, blossoming orchards and fertile fields became the object of Polish art photographers – Marek Kiedrowski and Krystof Brovko.

Modern Drunkard Magazine 1. If you owe someone money, always pay them back in a bar. Preferably during happy hour. 2. Always toast before doing a shot. 3. Kaleidoscopic Compositions by Andy Gilmore A master of color and geometric composition, Andy Gilmore’s work is often characterized as kaleidoscopic and hypnotic, though it could just as well be described as visually acoustic, his often complex arrangements referencing the scales and melodies in music. Gilmore’s journey toward this masterful style followed a long and winding road. He characterizes his pursuit of education as a tangled web, noting the bookstores, bakeries, and theaters where he worked were of more importance than the schools he attended in pursuit of his BFA, which he received from SUNY Empire State College. After finishing school, Gilmore relocated to San Clemente, California, where he took up work for FourStar Distribution, resizing print ads for C1RCA Footwear and Forum Snowboards.

Having doodled my way through who-knows-how-mamy-unpurposed meetings I took some of the doodles and evolved them further, as abstract watercolor and ink works, and as bookmarks, book covers, and the ever-quick photo copy or photo print. Don't ignore your doodles-they can be inspirational and commercially attractive. by judearnold Apr 14