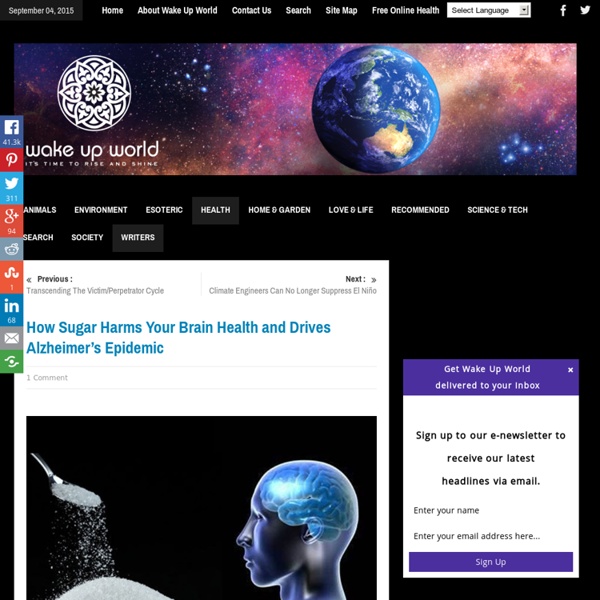 By Dr. Joseph Mercola Guest Writer for Wake Up World Alzheimer’s disease, a severe form of dementia, affects an estimated 5.2 million Americans, according to 2013 statistics.[1] One in nine seniors over the age of 65 has Alzheimer’s, and the disease is now thought to be the third leading cause of death in the US, right behind heart disease and cancer. A growing body of research suggests there’s a powerful connection between your diet and your risk of developing Alzheimer’s disease, via similar pathways that cause type 2 diabetes. Contrary to popular belief, your brain does not require glucose, and actually functions better burning alternative fuels, especially ketones, which your body makes in response to digesting healthy fats. According to some experts, such as Dr. Sugar Damages Brain Structure and Function In your brain, insulin helps with neuron glucose-uptake and the regulation of neurotransmitters, such as acetylcholine, which are crucial for memory and learning. Neurologist Dr. Related:  Alzheimers and Dementia • Aging & Memory

How Whole Turmeric Heals The Damaged Brain Long considered impossible to accomplish, new research reveals how a simple spice might contribute to the regeneration of the damaged brain. Turmeric is hands down one of the, if not the, most versatile healing spice in the world with over 600 experimentally confirmed health benefits, and an ancient history filled with deep reverence for its seemingly compassionate power to alleviate human suffering. But, most of the focus over the past decade has been centered on only one of its many hundreds of phytocompounds: namely, the primary polyphenol in turmeric known as curcumin which gives the spice its richly golden hue. This curcumin-centric focus has lead to the development of some very good products, such as phospholipid bound curcumin concentrate (e.g. Truth be told, there is no singular ‘magic bullet’ in foods and herbs responsible for reproducing the whole plant’s healing power. This study did not go unnoticed by major medical news channels.

Study: Opioid Abuse Rates Lower In Medical Marijuana States By Paul Armentano, NORML Deputy Director Rates of prescription opioid abuse are significantly lower in jurisdictions that permit medical marijuana access, according to data reported by Castlight Health, an employee health benefits platform provider. Investigators assessed anonymous prescription reporting data from over one million employees between the years 2011 and 2015. In states that did not permit medical marijuana access, 5.4 percent of individuals with an opioid prescription qualified as abusers of the drug. (The study’s authors defined “abuse” as opioid use by an individual who was not receiving palliative care, who received greater than a 90-day cumulative supply of opioids, and received an opioid prescription from four or more providers.) Full text of the new study, “The opioid crisis in America’s workforce,” appears online here. Source: NORML - make a donation

Dementia Risk Linked with Common Medications Monday, June 20, 2016 By: Linda J. Dobberstein, Chiropractor, Board Certified in Clinical Nutrition Drugs like Benadryl, Coumadin, Sominex, Klonopin, Detrol, Flexeril, Lasix, and Elavil have something in common. Risk for Dementia Years after Anticholinergic Drug Use Recent headlines from major medical journals are permeating the press on whether or not anticholinergic medications affect memory and lead to dementia even after the drugs have been stopped. The JAMA study from March 2015 found that in a remarkable, comprehensive study, anticholinergic drug use is indeed associated with increased risk for dementia. The analysis showed that 78 percent of the participants used an anticholinergic medication at least once in 10 years. The 2016 BMJ article used the same group participants and information as the JAMA study. A more recent review and meta-analysis study in the journal PLoS One analyzed numerous studies on anticholinergic medications in those 55 years of age and older.

Nutrition Makes Anti-Aging Possible: Secrets of Your Telomeres Tuesday, December 03, 2013 By: Byron J. Richards, Board Certified Clinical Nutritionist The 21st Century is ushering in a new era of nutritional science, demonstrating the astonishing power of nutrition to benefit human health. In this light, the search for the Fountain of Youth is no longer a fairy tale. Scientific findings now suggest that nutrition may be able to turn back the clock - at least a little bit. A telomere is a repeating sequence of DNA at the end of a chromosome. Various stressors accelerate the rate at which telomeres shorten, in turn speeding up the rate of biological aging. Another important aspect of this topic is telomere quality, as different from telomere length. One way to view our potential to influence the aging process is simply to slow down the rate. Another intriguing possibility is that we may be able to lengthen telomeres while maintaining their quality, actually turning back the biological clock. Basic Nourishment for Your Telomeres Summary

Exploring the Superconscious Interview with Dr Edward Bynum, author of Dark Light Consciousness Author: Jair Robles We are all familiar with its symbolic representations, be it from the caduceus used by modern medicine, the winged serpent of Prehispanic Mesoamerican cultures or the dragons commonly seen at most Asian celebrations. It is said to represent a dormant energy that lies within every one of us, at the base of the spine, and that when this energy is awakened and driven into the brain it opens up our access to higher states of consciousness and our connection to the divine. It is refreshing and exciting to find that current scientists and scholars, such as Dr Edward Bynum, are making an effort to bring this knowledge back for the scrutiny and study of modern science. Dr Edward Bruce Bynum is a clinical psychologist and director of behavioral medicine at the University of Massachusetts Health Services in Amherst. So those are the roots of my search as a seeker. Melanin and neuromelanin are biopolymers.

This Is Your Brain on Drugs The gray matter of the nucleus accumbens, the walnut-shaped pleasure center of the brain, was glowing like a flame, showing a notable increase in density. “It could mean that there’s some sort of drug learning taking place,” speculated Jodi Gilman, at her computer screen at the - Center for Addiction Medicine. Was the brain adapting to marijuana exposure, rewiring the reward system to demand the drug? Dr. Gilman was reviewing a composite scan of the brains of 20 pot smokers, ages 18 to 25. What she and fellow researchers at Harvard and found within those scans surprised them. Moderate marijuana use by healthy adults seems to pose little risk, and there are potential medical benefits, including easing nausea and pain. Photo Marijuana samples seized by the federal Drug Enforcement Agency show the concentration of THC, the drug’s psychoactive compound, rising from a mean of 3.75 percent in 1995 to 13 percent in 2013. Higher potency may also accelerate addiction. Dr. Dr.

Defeating aging, and the avenues ahead of us: Part 2 With a clear way forward, what are we waiting for? If we get this done, then we can probably live indefinitely. Can humans be so mentally slothful and negligent that they would be able to do all kinds of things on microscopic scales and yet not be able to clear damage out of biology? Does anybody really think that most mitochondrial proteins can make it through the TIM/TOM complex, but that it’s out of the question for the rest of them? (Part Three) (Part One) If you haven’t been paying attention, control of our world through science has been bursting at the seams now for a while. If we want it and put our minds to it, then we could get it done. The seven stand tall and strong. As de Grey explains, and as anyone is dared to refute, there seem to be only those seven forms of damage that age us to death by accumulating in and around our cells. It’s not “seven plus all the ones we can't get a grip on or figure out yet.” As written in Ending Aging, Charles V.

Man About To Turn 114 Has Some More Longevity Tips For You By Heather Callaghan Last summer, we wrote about the 113-year-old, Bernando LaPallo - the man who truly lives by the creed, you are what you eat. He has outlived his friends, his former critics, two out of his three children, and his wives. He eschewed french fries for five daily, life-giving foods - some of which included cinnamon, garlic and chocolate. He has drawn sustenance from high amounts of veggies, fruits and fish for most of his life, if not all of it. Now he reveals more about his day. Everyone wants to know about his youthful skin - the main reason no one believes him when he states his age. "Baby," he said to the 12 News anchor, "That's simple. He shared the following smoothie recipe he has used in a blender and consumed daily for 40 years: 1 Tbs of Dr. Unfortunately, for the Brazilian-born LaPallo, his age proclamations are met with many challenges, although he and his family stalwartly defend his current age of 113. Image: 12News

In the Shadow of Hegel: How Does Thought Arise Out of Matter? | Postcards from Žižek What's the Big Idea? Before neuroscience and quantum physics, there was Georg Wilhelm Friedrich Hegel. The 19th century German idealist revolutionized Western thought, and every great thinker since has been working in his shadow, says Slavoj Žižek, the Slovenian philosopher and cultural critic. Watch the video interview: Often seen as a precursor to Marxists and existentialists, Hegel believed that knowledge is not static, but dynamic. But what does it mean in a world where cognitive scientists can see brain function on an fMRI scan, capture the visual data, and reassemble it into videos using quantitative modeling? What's the Significance? Reductionists like Stephen Hawking may give the impression that contemporary science is uniquely capable of answering the big questions, like Does the world have an end? Which is why he's calling for the rehabilitation of classical philosophy: for contemporary philosophers to engage with the work of scientists and vice versa.

An implant to prevent Alzheimer's In a cutting-edge treatment for Alzheimer's disease, EPFL scientists have developed an implantable capsule that can turn the patient's immune system against the disease. One of the hypothesized causes of Alzheimer's is the over-accumulation of the protein amyloid beta (Abeta) in different areas of the brain. This results in the deposition of aggregated protein plaques, which are toxic to neurons. One of the most promising ways to fight the plaques is to "tag" the Abeta proteins with antibodies that signal the patient's own immune system to attack and clear them. To be most effective, this treatment has to be given as early as possible, before the first signs of cognitive decline. But this requires repeated vaccine injections, which can cause side effects. The lab of Patrick Aebischer at EPFL has developed a bioactive capsule containing cells that have been genetically engineered to produce antibodies against Abeta. The cells inside the capsule are important. Reference

Compound In Cannabis Shown To Remove Toxic Alzheimer’s Protein From The Brain | Culture of Awareness By Alanna Ketler, Collective Evolution An active compound found in the cannabis plant called tetrahydrocannabinol, more commonly known as THC, has recently been found to promote the removal of toxic clumps of amyloid beta protein in the brain, which are thought to be precursors to Alzheimer’s disease. These findings support the results of previous studies, which found evidence of the protective effects of cannabinoids, including THC, on patients with the neurodegenerative disease. According to senior paper author David Schubert, of the Salk Institute for Biological Studies in California, “Although other studies have offered evidence that cannabinoids might be neuroprotective against the symptoms of Alzheimer’s, we believe our study is the first to demonstrate that cannabinoids affect both inflammation and amyloid beta accumulation in nerve cells.” What Exactly Is Alzheimer’s Disease? The Study Previous Research Conclusion Much Love Like this: Like Loading... Related In "A New Paradigm"