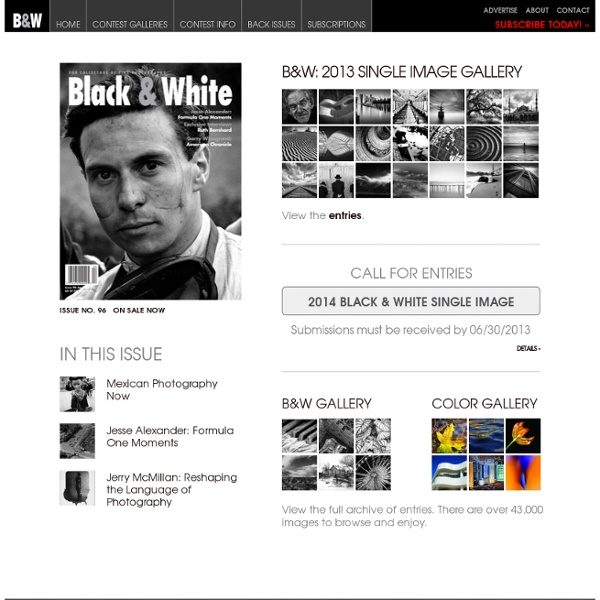 Subscribe to the Best Magazine About Fine Art Photography! Free Trial Offer > Subscribe Today! » Issue No. 103 On Sale Now In this Issue

Photography Olympus VR-340 Digital Compact Camera - Black (16MP, 10x Super Wide Optical Zoom) 3 inch LCD Olympus VR-340 Smart 3D Camera Black 16MP 10xZoom 3. 0LCD 720pHD 24mm Wide Lens...... Sigma AF 300-800mm f/5.6 Apo EX DG HSM for Nikon ...... Circular Polarizing Polariser CPL C-PL Filter for Cokin P Series How to use 1. Screw the ring adapter onto your lens. 2. Slide the filter holder on the ring adapter until it snap in place. 3. The Great Geek Manual » The World’s Most Beautiful Libraries I make no secret of the fact that I’m a hardcore bibliophile, but we’re a common enough lot these day. And the one sight that always makes me linger over a webpage is rows and rows of neatly organized books. So, in an effort to draw more like-minded read here to my little blog, I decided to round-up a gallery of photos of some of the most beautiful libraries I’ve ever seen photos of. Enjoy. If you enjoy this gallery, make sure you check out our other list of The United States’ Most Beautiful Libraries! Abbey Library St.

The 20 Most Beautiful Bookstores in the World [Editor’s note: In celebration of the holidays, we’re counting down the top 12 Flavorwire features of 2012. This post, at #1, was originally published January 31.] With Amazon slowly taking over the publishing world and bookstores closing left and right, things can sometimes seem a little grim for the brick and mortar booksellers of the world. Photography Techniques I often get questions about how I took one picture or another. Perhaps the most common is this one: "I'm a beginner, and it would really help me learn if you could tell me what camera settings you had when you took that picture." This is, perhaps, the worst possible question a student can ask, and conversely, it's the most irresponsible one a teacher can answer. This dispels the old saying that "there is no such thing as a stupid question."

Everything but the Paper Cut: Eye-popping Ways Artists Use Paper In the year since the Museum of Art and Design reopened in its new digs on Columbus Circle, they've been delivering consistently compelling shows--from punk-rock lace to radical knitting experiments. The newest, "Slash: Paper Under the Knife", opened last weekend and runs through April 4, 2010. The focus is paper--and the way contemporary artists have used paper itself as a medium, whether by cutting, tearing, burning, or shredding. In all, the show features 50 artists and a dozen installations made just for the show, including Andreas Kocks's Paperwork #701G (in the Beginning), seen above. Here's a sampling of the other works on display:

Several Famous Artworks Recreated With LEGO Renowned LEGO Artist Nathan Sawaya (see previously) has recreated several art masterpieces out of LEGO. His impressive work has toured the world and is now on display in New York at Discovery Times Square in his “The Art of the Brick” exhibition. Each piece is built from LEGO blocks using only the official colours released. The exhibit includes recreations of Edvard Munch’s The Scream, Leonardo da Vinci’s Mona Lisa (made with 4,573 bricks), Auguste Rodin’s The Thinker, and Johannes Vermeer’s Girl With a Pearl Earring. Dancing Colors 13K views 510 days ago by Jolita Switzerland-based photographer Fabian Oefner decided to connect visual world to an acoustic one in a way that would illustrate an actual sound wave in a photograph. He does it by putting some colorful pigments on the speaker which is covered with a thin foil. Then, when the sound goes through the speaker, it triggers some movements and the vibrating speaker makes the colors shout in the air. This is the moment when a colorful sound wave is formed.

Victory Rolls Hairstyle The 1940s Victory Roll hairstyle is often said to acquire its name from the fighter plane maneuvers of World War II. The planes created an exhaust roll that remained in the sky after leaving the area and inspired many patriotic civilians to adopt the the name in honour of the soldiers returning home. The name has also been linked to the “V” shape the rolls can sometimes mimic when styled in a particular, upright way.