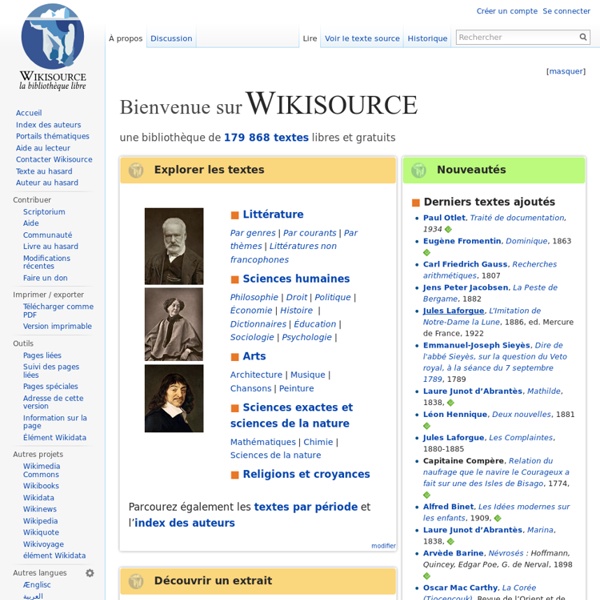 Etext Center: Collections University of Virginia Library > Our Organization > The Electronic Text Center The Electronic Text Center (1992-2007), known to many as “Etext,” served the University community’s teaching and research needs in the areas of humanities text encoding for fifteen years. Many of the resources once available on Etext are now available via VIRGO, the Library’s online catalog and the primary access point for all U.Va. Library digital texts and images. In the course of migrating thousands of texts from Etext to VIRGO, we determined that certain resources were not eligible for inclusion, most often due to copyright issues. Accueil CancelEditDeletePreviewrevert Text of the note (may include Wiki markup) Could not save your note (edit conflict or other problem). Please copy the text in the edit box below and insert it manually by editing this page. Upon submitting the note will be published multi-licensed under the terms of the CC-BY-SA-3.0 license and of the GFDL, versions 1.2, 1.3, or any later version. See our terms of use for more details.

Ishida Eiichirō Ishida Eiichirō (石田 英一郞?, June 13, 1903 – November 9, 1968) was a Japanese student of folklore. He became a communist at an early age, and was convicted under the Peace Preservation Law in 1928 and sentenced to five years jail. During his term of incarceration, he read widely, both in the Chinese classics and Western anthropology. You Should Date An Illiterate Girl Date a girl who doesn’t read. Find her in the weary squalor of a Midwestern bar. Find her in the smoke, drunken sweat, and varicolored light of an upscale nightclub. Wherever you find her, find her smiling. Great Books Index An Index to Online Great Books in English Translation Aeschylus . Apollonius . NDA Euro Captain America Captain America is a comic book. The main character is the captain and he is a super hero! The authors are Jack Kirby and Joe Simon. The first book was edited in March 1941.

Project Gutenberg - free ebooks On August 26 2020, the Project Gutenberg website underwent some major changes. These changes had been previewed since early 2020, and visitors to the old site were invited to try the new site, including giving input via a brief survey. The old site is no longer available.

did-you-know « teatime magazine Color is everywhere. It is all around us. But have you ever stopped to think about what it all means? For example, why are people more relaxed in green rooms? Why do weightlifters do their best in blue gyms? Colors often have different meanings in various cultures. Minakata Kumagusu Minakata in the USA in 1891 Minakata Kumagusu (南方 熊楠?, April 15, 1867 – December 29, 1941) was a Japanese author and naturalist. Biography[edit]

Video Games Built Just for Girls Digital Tools School 26 The stereotypical video game player is a young male under age 18, but study after study has shown that majority of the game-playing population does not fall into that demographic. Only 18% of gamers are under age 18, and women over 18 represent a significantly greater proportion of this population (37%) than do boys age 17 or younger (13%). With the explosive growth in social gaming, particularly on Facebook, more games are being targeted at women.

Kunio Yanagita Kunio Yanagita (柳田 國男, Yanagita Kunio?, July 31, 1875 – August 8, 1962) was a Japanese scholar who is often known as the father of Japanese native folkloristics, or minzokugaku. Yanagita's focus on local traditions was part of a larger effort to insert the lives of commoners into narratives of Japanese history. He argued that historical narratives were typically dominated by events pertaining to rulers and high-ranking officials. Yanagita claimed that these narratives focused on elite-centered historical events and ignored the relative uneventfulness and repetition that characterized the lives of ordinary Japanese people across history. He emphasized the unique practices of different groups of common people, such as sanka or mountain dwellers, and island dwellers.