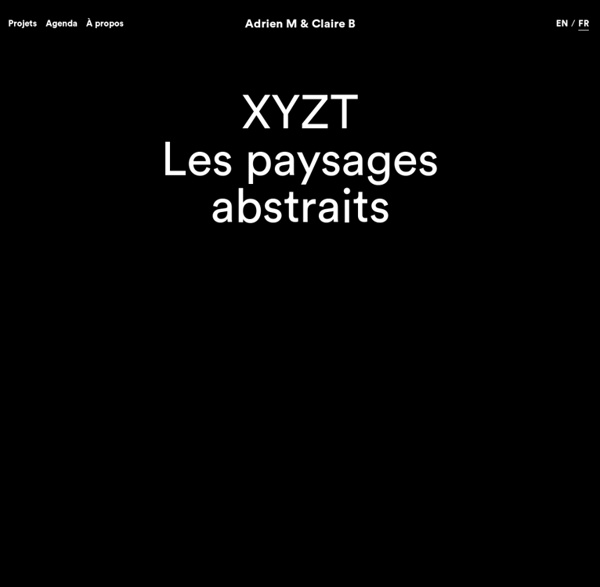 Paleodictyon Paleodictyon A project by Simon Geilfus, Yannick Jacquet and Thomas Vaquié Centre Pompidou Metz, France, October 6th 2012 Loosely inspired by the work and research of deep-sea expert Peter A. Rona, the piece abolishes notions of scale by contrasting micro-architecture with human construction. Fascinated by the marks left by unknown creatures called Paleodictyon Nodosum, he offers the hypothesis that these hexagonal structures are designed in order to cultivate bacteria. A modern day Captain Nemo, Peter A.

Godfrey Reggio Godfrey Reggio is an inventor of a film style which creates poetic images of extraordinary emotional impact for audiences worldwide. Reggio is prominent in the film world for his QATSI trilogy, essays of visual images and sound which chronicle the destructive impact of the modern world on the environment. Reggio, who spent 14 years in silence and prayer while studying to be a monk, has a history of service not only to the environment but to youth street gangs, the poor, and the community as well. Born in New Orleans in 1940 and raised in southwest Louisiana, Reggio entered the Christian Brothers, a Roman Catholic pontifical order, at age 14. He spent 14 years of his adolescence and early adulthood in fasting, silence, and prayer. Based in new Mexico during the sixties, Reggio taught grade school, secondary school and college.

Using cues, timelines and VJ software for performances These days as a part of the Obscura crew I am ofting doing visual shows that have more in common with theatre productions than traditional VJing. Often there is some sort of script for a show or a piece of music that is rehearsed. For these types of jobs I have found good use for the application called QLab which is great for triggering a pre planned sequence of events. Actually the whole point of QLab is to line up a sequence of audio, video files or other types of events and being able to trigger them with a simple ‘Go’ button at the exact right time during the show. QLab was originally developed with audio in mind and has later been extended with video features so it does not have many features as VJ applications when it comes to live manipulations of images and video. But for those of us who sometimes wish for a timeline in our favorite VJ application, QLab may be an option if you set it up to run alongside your VJ app.

Syphon Syphon is an open source Mac OS X technology that allows applications to share frames - full frame rate video or stills - with one another in realtime. Now you can leverage the expressive power of a plethora of tools to mix, mash, edit, sample, texture-map, synthesize, and present your imagery using the best tool for each part of the job. Syphon gives you flexibility to break out of single-app solutions and mix creative applications to suit your needs. Videos: Syphon Overview | Quartz Composer Integration | FreeFrame GL Integration | Syphon 2K Jitter Demo | Syphon Vimeo Group 30+ Organizations for Women in Technology - Kira M. Newman for the National Edition Being a woman in technology has its challenges, but feeling alone shouldn’t be one of them. Whether you’re a girl, a woman, or a grrl, the 20 organizations below can help you get connected with other entrepreneurs, designers, and developers; get help with coding, marketing, and fundraising; or just get inspired. And these are only the tip of the iceberg, with tons of local clubs, meetups, and organizations cheering on lady technologists. Education

alexandre burton Alexandre Burton's interest for new media technology stems from a desire to reveal new forms of expressivity through digital processes. Tightly integrating hardware and software, his artistic work is the result of attempts to think beyond media, in a realm where sound, images and processes cohabit and answer to each other in meaningfull ways. His work is regularily presented in international new media and music events. Morphogenetic Creations by Andy Lomas Created by a mathematician, digital artist and Emmy award winning supervisor of computer generated effects – Andy Lomas, Morphogenetic Creations is a collection of works that explore the nature of complex forms that can be produced by digital simulation of growth systems. These pieces start with a simple initial form which is incrementally developed over time by adding iterative layers of complexity to the structure. The aim is to create structures emergently: exploring generic similarities between many different forms in nature rather than recreating any particular organism. In the process he is exploring universal archetypal forms that can come from growth processes rather than top-down externally engineered design. Programmed using C++ with CUDA, the series use a system of growth by deposition: small particles of matter are repeatedly deposited onto a growing structure to build incrementally over time. Andy Lomas | lacda

Variable 4 Variable 4 is an outdoor sound installation that translates weather conditions into musical patterns in real time. Using meteorological sensors connected to a custom software environment, the weather itself acts as conductor, navigating through a map of twenty-four specifically-written movements. Every aspect of the piece, from broad harmonic progressions down to individual notes and timbres, is influenced by changes in the environment: wind speed, rainfall, solar radiation, humidity, tropospheric variance, temperature, and more. The resultant composition is performed over an indeterminate duration through eight loudspeakers integrated into the landscape.