Research and Develop It Yourself 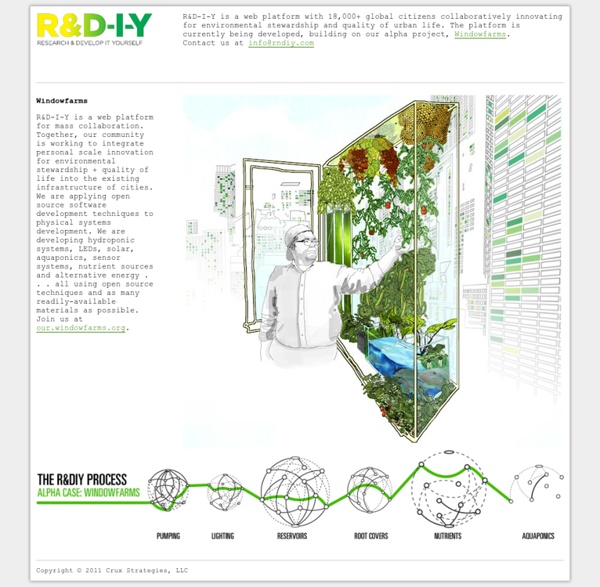 Chemical & Engineering News: What's That Stuff? You might ask yourself... What's That Stuff? Ever wondered about what's really in hair coloring, Silly Putty, Cheese Wiz, artificial snow, or self-tanners? MIT Unveils Flexible Solar Cells Printed on Paper We’ve seen several different examples of printable solar cells in the past, however MIT engineers just unveiled a new type of cell that can be printed onto paper or fabric. The flexible photovoltaic cells are not energy intensive to produce and they can be folded over 1,000 times without any loss of performance. The technology was officially published today in the journal Advanced Materials by Professor of Electrical Engineering Vladimir Bulović and several other students. Instead of creating solar cells by exposing substrates to liquids or high temperatures, the team has developed a process that can produce solar cells on ordinary paper or cloth using ‘gentle’ conditions. The solar cells are formed by placing five layers of material onto a single sheet of paper in successive passes.

How to Trick Your Brain for Happiness This month, we feature videos of a Greater Good presentation by Rick Hanson, the best-selling author and trailblazing psychologist. In this excerpt from his talk, Dr. Hanson explains how we can take advantage of the brain’s natural “plasticity”—it’s ability to change shape over time. gobyg There’s this great line by Ani Tenzin Palmo, an English woman who spent 12 years in a cave in Tibet: “We do not know what a thought is, yet we’re thinking them all the time.” GoFlow: a DIY tDCS brain-boosting kit Did you know that by attaching a 9-volt battery to your scalp — with the help of some electrodes and some wet sponges (or conducting gel) — you can more than double your brain’s learning rate and boost peak performance? It sounds crazy, but it has now been proven by multiple studies that transcranial direct-current stimulation (tDCS) can significantly speed up your brain. In one case, the US Air Force used tDCS on trainee drone pilots to halve their learning time; likewise, DARPA has used tDCS to speed up the training of snipers.

Boost Your Brain’s Power With a 9-Volt Battery and Some Wet Sponges It seems, with the help of a 9-volt battery, wire, crocodile clips, and wet sponges, you can increase your brain’s performance and, more importantly, return your brain to its younger, more malleable and learning-receptive state. The technique, which is lumbered with the fantastic and slightly terrifying name of transcranial direct-current stimulation (tDCS), is similar to deep brain stimulation (DBS), but it doesn’t involve complex neurosurgery. TCDS runs a very small current — just 2 milliamps — into brain tissue just beneath your scalp; it’s non-invasive, and seemingly quite safe. By pumping electrons into the brain, neurons move a few millivolts towards ‘depolarization’, which makes them more sensitive, and thus reducing the time it takes signals to travel across your nervous system.

The recipe for success: get happy and you will get ahead in life Happiness, rather than working hard, is the key to success, according to research published today. Cheerful people are more likely to try new things and challenge themselves, which reinforces positive emotion and leads to success in work, good relationships and strong health, say psychologists. The findings suggest that happiness is not a "feelgood" luxury, but is essential to people's wellbeing. Deskercise! 33 Ways to Exercise at Work Remember the days when “work” meant manual labor with a side of blood, sweat, and tears? Neither do we. These days it seems we’re more likely to log hour after idle hour with our bums glued to our seats. And while you may be an Excel champ by day and gym rat by night, recent research suggests that the recommended 30 minutes of cardio five times per week may not undo the health risks of a sedentary lifestyle . So what’s a worker chained to his or her desk to do?

Top 40 Useful Sites To Learn New Skills The web is a powerful resource that can easily help you learn new skills. You just have to know where to look. Sure, you can use Google, Yahoo, or Bing to search for sites where you can learn new skills , but I figured I’d save you some time. 30 Challenges for 30 Days Did you know that it takes 30 days to form a new habit? The first few days are similar as to how you would imagine the birth of a new river. Full of enthusiasm it gushes forth, only to be met by strong obstacles. The path is not clear yet, and your surroundings don’t agree.

Correcting Creativity: The Struggle for Eminence By the time he put the finishing touches on the Rite of Spring in November of 1912 in the Châtelard Hotel in Clarens, Switzerland, Stravinsky had spent three years studying Russian pagan rituals, Lithuanian folk songs and crafting the dissonant sacre chord, in which an F-flat major combines with an E-flat major with added minor seventh. The rehearsal process wasn’t easy either. Stravinsky fired the German pianist and the orchestra and performers only had a few opportunities to practice at the Théâtre des Champs-Élysées in Paris, where the Rite debuted in May 1913. But the Russian born composer pulled it off, and his composition now stands as a 20th century masterpiece. Stravinsky is one of seven eminent creators of the 20st century profiled by Harvard professor Howard Gardner in his 1993 book Creating Minds. The others are Pablo Picasso, Sigmund Freud, T.S.

Ways to Improve Human Intelligence This briefing is intended to pull into one convenient, single frame of reference a body of key information which currently is scattered across a great many different contexts. Until recently, even the possibility of any such information existing was, for essentially political reasons and funding reasons, denied by most of our institutions, together with most of our educators and psychologists, so that such findings as were made in various contexts and circumstances never got discussed across a broader context. Now that it is evident that the brain, and one's intelligence, are highly changeable and that a wide variety of conditions, arrangements and techniques may be employed to improve both brain functioning and intelligence to even a profound degree, we need to make a start on getting a lot of this key information organized to where you and other inquirers can more readily get at it, understand it, and use it. Menu of Methods