Twitter: How to archive event hashtags and create an interactive visualization of the conversation Jisc CETIS MASHe 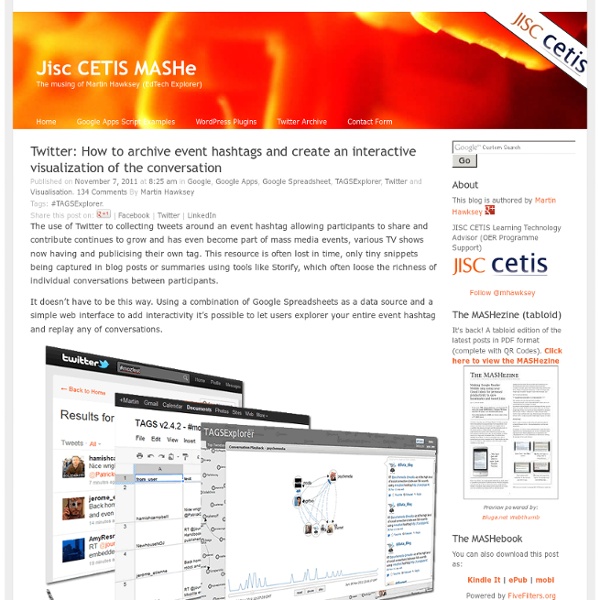 The use of Twitter to collecting tweets around an event hashtag allowing participants to share and contribute continues to grow and has even become part of mass media events, various TV shows now having and publicising their own tag. This resource is often lost in time, only tiny snippets being captured in blog posts or summaries using tools like Storify, which often loose the richness of individual conversations between participants. It doesn’t have to be this way. Using a combination of Google Spreadsheets as a data source and a simple web interface to add interactivity it’s possible to let users explorer your entire event hashtag and replay any of conversations. View example conversation replay Try out a LIVE version Update: If you are still struggling to understand the concept Radical Punch have done a overview of this tool Here's how to archive event hashtags and create an interactive visualization of the conversation (written instructions below): Capturing the tweets

HOW TO CHEAT AT EVERYTHING Over lunch with Simon Lovell, a fascinating former card shark, Allison Schrager learns all sorts of things about how swindlers operate ... Special to MORE INTELLIGENT LIFE "I can spot someone's weakness a mile away. Twitter: The Best PD For Educators Free, instantaneous and self-directed, social networks like Twitter carry enormous benefits for educators’ professional development. By following national experts and participating in worldwide chats, even skeptical teachers can share lessons, explore theories, and trade resources. Many simple ways exist for teachers to gain insights into eye-opening concepts, articles, and resources through cooperative technology. Professional development can often be costly, but free social networks empower both educators and students to direct their own learning and internalize best practices from esteemed experts and fellow instructors. Social networking has become an integral part of most families’ lives, but it has not yet become synonymous with education. As daily leaders in their students’ lives, teachers also need to be technological leaders in tapping into dynamic information streams like Twitter, Pinterest, and others to collect best practices and motivate young learners.

10 tools that can help data journalists do better work, be more efficient It’s hard to be equally good at all of the tasks that fall under data journalism. To make matters worse (or better, really), data journalists are discovering and applying new methods and tools all the time. As a beginning data journalist, you’ll want to develop a sense of the tools others are using to do the work you admire. How to Make Holograms "Everything should be made as simple as possible, but not simpler” - Albert Einstein We attempt to follow this dictum so you can make holograms easily. The procedures we propose herein are as simple as it is physically possible. In the process, we make holography not only as simple as possible, but safer, less expensive, and more accessible to young people. Most of the essential items described in this article can be found in Integraf's holography kits or are available separately. The kits provide materials for you to make many kinds of holograms, including reflection holograms and transmission holograms.

100 Of The Best Twitter Tools For Teachers By Category In 2009, we shared our favorite tools for teachers on Twitter, with 100 resources for managing feeds, finding followers, and tackling classroom groups on the social media site. Since then, many tools have been revamped, replaced, or simply aren’t available anymore. Clearly, an update is in order, so we’re proud to present a new list for 2012, featuring the very best tools available to Twittering teachers today. Infomous Infomous is a revolutionary way to explore online content visually. Add Infomous on your site to engage readers, increase circulation and generate revenues. Create an Infomous cloud with your content and embed it on your site. See How to Embed Infomous How to Solve a Rubik's Cube (Easy Move Notation) First LayerMiddle LayerLast layerNotations Edited by NatK, Krystle, Mimi, BohemianWikipedian and 59 others The Rubik's Cube can be very frustrating and may seem next to impossible to restore to its original configuration.

25 Ways To Get The Most Out Of Twitter Twitter may very well be the single most important tool for teachers right now. Considering many are not even using the service, that says a lot about how effective the platform is for learning, engaging, development, and more. In an effort to make sure you are getting the most out of Twitter, we’ve compiled a very lengthy list of tips and tricks. That long list is coming out tomorrow morning but we thought you’d enjoy our hand-picked choices. See Also: 45 Simple Twitter Tips Everyone Should Know About

Reporters' Lab // How a conference taught me I know nothing The Chicago Tribune's Brian Boyer removes his costume panda head before demonstrating PANDA, an open-source database system developed by Investigative Reporters and Editors. | Photo by Tyler Dukes It was the lightning talks that set my head spinning. I’m a bit new to the world of data journalism, and up until that point, my first time at the annual Computer-Assisted Reporting conference had stopped just short of overwhelming. But after a few mile-a-minute presentations in this particular session , I only had one clear thought: There’s so much to know, and not enough time to learn it. Luckily, Politifact developer and University of Nebraska-Lincoln journalism professor Matt Waite gave the audience a little bit of reassuring advice gleaned from Zen Buddhism: It’s bad to be an expert.

Twitter - A Necessity for Educators in 2012 - Texas Principal Twitter A Necessity for Educators in 2012 “Twitter won’t change your life, but it might make your job more fun and a little easier” - NEA What is Twitter? Twitter is an online social networking site which allows users to send and receive messages of up to 140 characters. Why should I join Twitter? Teaching Materials from NICAR 2012 « Michelle Minkoff I had the sincere honor of presenting at NICAR 2012 in St. Louis for the second year in a row. I provide the takeaway materials here, if you find them useful. Bring Your Mapping Dreams to Fruition — code for demos of Leaflet and Raphael, for making zoomable and non-zoomable maps. Tipsheet with links to projects we’ve done at the AP using these tools, documentation and helpful tools to use, and sample code for some more basic projects I demoed during the session Web Scraping without Programming (Panel) — Chris Keller and I talk about free tools you can use that will take care of scraping tasks for you, without you having to spend time/have the knowledge set to write code.

Related:
Related:  How to...   -  Apps for Classrooms   -  Outdoor Classrooms   -  Why should we integrate technology in classrooms?   -  Connecting Communities: LIBR 298 Community Guide photos   -  Classrooms/Teaching   -  Index of Learning Styles Questionnaire   -  Evaluating Web Pages: Techniques to Apply & Questions to Ask   -  National Library of Virtual Manipulatives   -  Web Accessibility In Mind   -  Free Audio Books   -  Teacher Resources   -  UDL Book Builder   -  Home Page   -  The Norman B. Leventhal Map Center   -  WPI Teaching with Technology Collaboratory - Improving the Use of Discussion Boards   -  Choice Boards   -  Apps in Education: 15 Presentation Apps for the iPad   -  ipadio - Reach the Hard to Reach   -  Simple, yet useful student organization. | TrackClass   -  ShowMe - The Online Learning Community   -  What is Authentic Assessment?   -  Building An Online Learning Community by Kevin Wilcoxon   -  Inclusion in the 21st-century classroom: Differentiating with technology - Reaching every learner: Differentiating instruction in theory and practice   -  ICTEvangelist - education, learning & technology   -  APPitic: Home   -  Problem loading page   -  Apps in Education: iPad Apps that work with Smartboards   -  What Ed Said – A blog about learning   -  Teacher Development: Starter Kit for Teaching Online   -  What Is Successful Technology Integration?   -  Educators Guide to the use of Pinterest in Education   -  14 Smart Tips for Using iPads in Class | MindShift   -  Lowe's Toolbox for Education   -  The 2 Hottest Educational Social Networks You're Not Yet Using | Edudemic   -  Rubrics to the Rescue   -  7 habits of highly effective teachers The Always Prepped Blog   -  What can you do with an iPad in the classroom? | Learning and Innovation