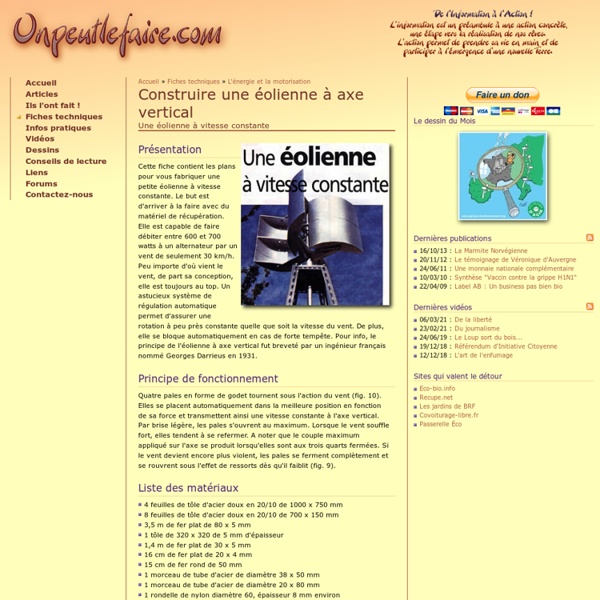 12" Mini turbine Mini DIY 12" Wind turbine updated 22-02-10 This was a very successful project, I used an off the shelf 3 bladed propeller, beautifully balanced and extremely strong, made from glass filled nylon, they are designed as 'pusher' props and can spin at up to an amazing 13 000 rpm when driven by a radio control plane engine. I suspect just 2000 rpm will be my max as a wind generator. I am using this propeller mounted backwards, so the flat side is facing forwards and the true aerofoil is on the back. Lenz2 wind turbine This instructable will show you how to build a Lenz2 wind turbine from materials you have around the house. The design was developed and tested by Ed Lenz of Windstuffnow.com: The Lenz2 VAWT (Vertical Axix Wind Turbine) is 4 foot tall and 3 feet in diameter. It is a basically a Savonius style turbine but with the refinement that the three wings are shaped to provide lift as well because or their teardrop configuration. In the above link Lenz describes how he placed an ananometer inside the stational turbine and showed that the windspeed picked up passing past the solid portion of the wings.

A fully transparent solar cell that could make every window and screen a power source Back in August 2014, researchers at Michigan State University created a fully transparent solar concentrator, which could turn any window or sheet of glass (like your smartphone’s screen) into a photovoltaic solar cell. Unlike other “transparent” solar cells that we’ve reported on in the past, this one really is transparent, as you can see in the photos throughout this story. According to Richard Lunt, who led the research at the time, the team was confident the transparent solar panels can be efficiently deployed in a wide range of settings, from “tall buildings with lots of windows or any kind of mobile device that demands high aesthetic quality like a phone or e-reader.”

Wind Turbine This post is not about Embedded Systems. But it is about a DIY project of mine. Old PC Fan to Wind Turbine. I looked at the some old PC Fans I have and thought that they can be used as Small Wind Turbines. The PC Fan is Brush less DC ( BLDC ) Motor. It can be converted to a generator in 5 Minutes.

Contrary to popular belief, smoking cannabis does not assist a great deal in treating disease within the body, as therapeutic levels cannot be reached through smoking. To get the best benefit from this miraculous plant, you should either eat it or take cannabis oil. Smoking also alters the plant molecules; when cannabis is heated and burned, it changes the chemical structure and acidity of the THC, which in turn negates its therapeutic value. The smoke from marijuana is toxic to the body, just as the smoke from any other substance would be. Furthermore, anytime you burn something and inhale it, you create oxidation within the body. Vertical Windmill Mk2 by miiiike Here's my 'Mk2' Vertical Axis Wind Turbine (VAWT). I've always liked the lines of these, but they really caught my attention a few weeks ago when I realised that I couldn't explain how they work. I'm now a lot less confused about how a wing works (really good explanation here if you're interested: and I've learnt a few new tricks with the printer.

Ted Baer's Bicycle Wheel Windmill Ted Baer has created a series of small windmills designed for third world use over a period of three decades. This first in the series has evolved in simplicity and power. The aluminum vanes are constructed from a building flashing roll utilizing the pre-existing bend of the roll in construction. Floyd Sweet's Vacuum Triode Amplifier - Generation 6 Documents show this version was in the order of 1000 - 5000 Watts Output. Here I show the possible construction of the Generation 6: Pictures of the constructed VTA. These pictures are from This is amazing. We now can see some insight to the actual processes that Floyd used to construct the VTA!

It's solar solar! New process uses sun's energy for producing photovoltaic materials True energy independence requires that we can manufacture the systems that collect solar or other renewable energy while using only those same renewable sources of energy. Researchers at Oregon State University therefore celebrate their breakthrough in producing solar energy materials with the power of the sun. Even better, the process offers time saving and cost benefits over current processes. © Oregon State UniversityThe new process relies on a continuous production process. Solar power heats materials in a continuous flow micro-reactor to generate a photosensitive ink which can be used to print thin film solar panels.

Vortex Trap All magnetic traps rely somewhat on vortex effects but this particular trap uses a vortex a bit more actively. The vortex trap uses something called the "vortex tube phenomenon". Following is a description of the vortex tube phenomenon from the Vortec web site at: "Vortex Tube PhenomenonThe vortex tube was discovered in 1930 by French physicist Georges Ranque. Tiny Windmill Siphons Renewable Energy To Your Apartment Dutch company claims to have a wind turbine that is 80% more efficient than existent turbines. Wind turbines might be an excellent source of renewable energy, but they have yet to become a residential feature due to one thing – the noise. Thankfully, a Rotterdam-based company called The Archimedes claims to have a solution that is not only quiet, but significantly more efficient that existing wind turbines. Modelled after a Nautilus shell, its inventors claim the Liam F1 Urban Wind Turbine can achieve “80 percent of the maximum that is theoretically feasible.” The wind turbine draws on formulas, drawings and principles pioneered by the brilliant Greek mathematician, among other things, Archimedes. Current wind turbines require a difference in pressure between the front and the rear side of the rotor blades to work properly, but this creates drag.

DIY Wind-Powered Water Pump Like my outdoor chandelier project, most of the parts for this wind pump came from the bicycle shop dumpster. I don't know the names for all these parts, so I'm not naming them. What I can say is that the gear-looking pieces were not gears on the bikes (I turned them into gears by adding bolts). I found them on mountain bike wheels, and they can only be installed on a wheel that had one in the first place. I'm also not sure what the best order is for putting this wind pump together, so I'll just rattle off what I did. 1. Added small bolts into every other hole in one of the "gears."