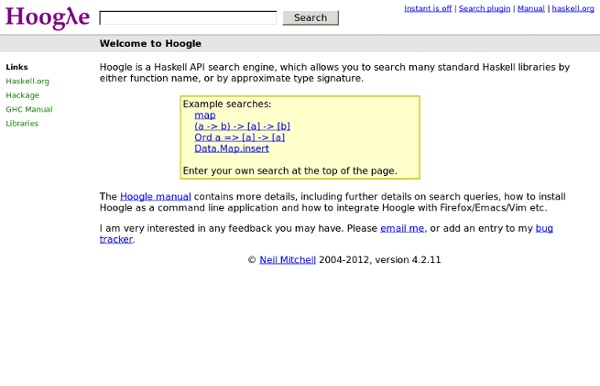 Hoogle is a Haskell API search engine, which allows you to search many standard Haskell libraries by either function name, or by approximate type signature. Example searches: map (a -> b) -> [a] -> [b] Ord a => [a] -> [a] Data.Map.insert Enter your own search at the top of the page. The Hoogle manual contains more details, including further details on search queries, how to install Hoogle as a command line application and how to integrate Hoogle with Firefox/Emacs/Vim etc. I am very interested in any feedback you may have.

Jailbreaking the NeoTV Today we’ll be jailbreaking the Netgear NTV300 set top box…with a TV remote. The Netgear NeoTV 300 Negear’s NeoTV set top boxes are designed to compete with the popular Roku, and can stream video from all the usual sources (Netflix, HuluPlus, Youtube, etc). The NTV300 is one of the least expensive NeoTV models, and while a GPL release is available, it contains only copies of the various standard open source utilities used by the NTV300. Inside the NTV300 we find a Mediatek ARM SoC, a 128MB NAND flash chip and 256MB of RAM: Inside the NTV300 The four pin header in the top right corner of the PCB is a serial port (115200 baud 8N1), and while it provides access to the U-Boot boot loader, it does not provide a root shell. Luckily, the firmware updates for the NTV300 aren’t encrypted. While the firmware update does not appear to contain a complete file system, most of the interesting stuff appears to be in the first SquashFS image. Printf’s reveal original function names How not to stat a file

What every computer science major should know Portfolio versus resume Having emerged from engineering and mathematics, computer science programs take a resume-based approach to hiring off their graduates. A resume says nothing of a programmer's ability. Every computer science major should build a portfolio. A portfolio could be as simple as a personal blog, with a post for each project or accomplishment. Contributions to open source should be linked and documented. A code portfolio allows employers to directly judge ability. GPAs and resumes do not. Professors should design course projects to impress on portfolios, and students, at the conclusion of each course, should take time to update them. Examples Technical communication Lone wolves in computer science are an endangered species. Modern computer scientists must practice persuasively and clearly communicating their ideas to non-programmers. Unfortunately, this is not something fixed with the addition of a single class (although a solid course in technical communication doesn't hurt). Java