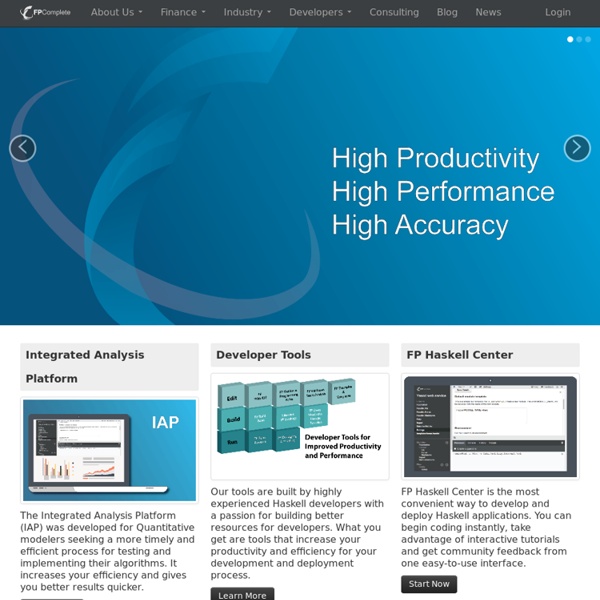 Haskell web programming update: updated for Yesod 1.2 tl;dr: A simple Yesod tutorial. Yesod is a Haskell web framework. You shouldn’t need to know Haskell. Why Haskell? Its efficiency (see Snap Benchmark & Warp Benchmark). Haskell is a high level language that makes it harder to shoot yourself in the foot than C, C++ or Java, for example. “If your program compiles it will be very close to what the programmer intended”. Haskell web frameworks handle parallel tasks perfectly—even better than node.js, for example. From a purely technical point of view, Haskell seems to be the perfect web development tool. Hard to grasp HaskellHard to find a Haskell programmerThe Haskell community is smaller than the community for /. I won’t say these are not important drawbacks. Actually there are three main Haskell web frameworks: I don’t think there is a real winner between these three framework. Why did I write this article? During this tutorial you’ll install, initialize, and configure your first Yesod project. Install Initialize

lisperati There's other tutorials out there, but you'll like this one the best for sure: You can just cut and paste the code from this tutorial bit by bit, and in the process, your new program will create magically create more and more cool graphics along the way... The final program will have less than 100 lines of Haskell[1] and will organize a mass picnic in an arbitrarily-shaped public park map and will print pretty pictures showing where everyone should sit! (Here's what the final product will look like, if you're curious...) The code in this tutorial is a simplified version of the code I'm using to organize flash mob picnics for my art project, picnicmob... [1] - Lines of active code only, not counting optional function signatures.

HaskellWiki A Little Lens Starter Tutorial lens is a package which provides the type synonym Lens which is one of a few implementations of the concept of lenses, or functional references. lens also provides a number of generalizations of lenses including Prisms, Traversals, Isos, and Folds. Lenses and their cousins are a way of declaring how to focus deeply into a complex structure. They form a combinator library with sensible, general behavior for things like composition, failure, multiplicity, transformation, and representation. Lenses let you apply some of the power of libraries like hxt to all data types in all programs that you write. As this comparison suggests, the initial steps might be very complicated, but, unlike hxt, lenses are ubiquitous enough to make learning the complexity pay off over time. The end result is a way to efficiently construct and manipulate "methods of poking around inside things" as simple first-class values. A lens is a first-class reference to a subpart of some data type. Yep. Any more examples? ...

Learn Haskell Fast and Hard I really believe all developers should learn Haskell. I don’t think everyone needs to be super Haskell ninjas, but they should at least discover what Haskell has to offer. Learning Haskell opens your mind. Mainstream languages share the same foundations: variablesloopspointersdata structures, objects and classes (for most) Haskell is very different. But learning Haskell can be hard. This article will certainly be hard to follow. The conventional method to learning Haskell is to read two books. In contrast, this article is a very brief and dense overview of all major aspects of Haskell. The article contains five parts: Introduction: a short example to show Haskell can be friendly.Basic Haskell: Haskell syntax, and some essential notions.Hard Difficulty Part: Functional style; a progressive example, from imperative to functional styleTypes; types and a standard binary tree exampleInfinite Structure; manipulate an infinite binary tree! 01_basic/10_Introduction/00_hello_world.lhs Introduction ou

ryantrinkle/try-reflex Control.Monad.Writer | A Journal of Haskell Programming functional programming - Getting started with Haskell Haskell for all Haskell Communities and Activities Report - HaskellWiki The Haskell Communities and Activities Report was initiated at the 2001 Haskell workshop, as a status report of the Haskell community as a whole, to be updated twice a year. The purpose is twofold: to establish what communities, people, and projects are out there, working with or on Haskell, and what their areas of interest are; to feed back summary information about ongoing activities in the diverse Haskell sub-communities and amongst Haskell users (commercial or otherwise) to the Haskell Community as a whole. To this end, there is a half-yearly informal survey of the main Haskell mailing list, inviting everyone to volunteer brief summary reports of their own community, project, company, research group, or whatever. These summaries cover activities of the last six months and plans for the next six months and are collected to form the Haskell Communities and Activities Report. 1 The twenty-eighth edition (May 2015) ... is available as PDF and HTML. ... is available as PDF and HTML.