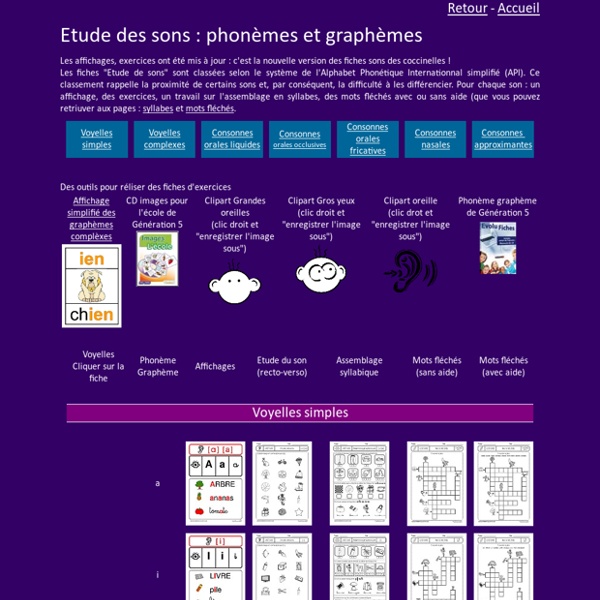 Les syllabes - quelle syllabe entends-tu? by French Buzz Featured Main Categories Cart is empty Total: Learn Spoken French: 10 French Pronunciations You Won't Learn in School Want to speak casually cool modern French? Then you’re ready to take your colloquial French up a notch. You’re already working on mastering French slang. The next step is to consider pronunciation! You’ve probably already learned quite a bit about French pronunciation in school, but what you’re learning is standard pronunciation, the way that the Académie française wants words to be pronounced (look it up if you’ve never heard of it—they’re the defenders of the French language, complete with swords!). But the reality is that French, like all languages, is constantly evolving and changing.

Top 10 French Pronunciation Mistakes and Difficulties Many students find that pronunciation is the hardest part of learning French. The new sounds, the silent letters, the liaisons... they all combine to make speaking French very tricky. If you really want to perfect your French pronunciation, your best option is to work with a native French speaker, preferably one who specializes in accent training. If that is not possible, you need to take things into your own hands, by listening to French as much as possible, and by studying and practicing the pronunciation aspects that you find most difficult. Based on my own experience as well as that of other French learners, here is a list of the top French pronunciation difficulties and mistakes, with links to detailed lessons and sound files.

Grid Paper PDFs Free Online Graph Paper / Grid Paper PDFs Downloadable and very printable, I find these PDFs extremely useful. Tip number one! Though I do return the correct header for a PDF, sometimes Explorer gets confused when downloading... So if you're running Windows, you may need to right-click a link and choose "Save link to disk". Tip number two!

Les syllabes - compte le nombre de syllabes -... by French Buzz Featured Main Categories Cart is empty Total: The 6-step Guide to Mastering French Phonetics The top of a ferris wheel can seem so high up from the ground. But when you’re on the slow, gentle ride, you know you’ll eventually reach the top. Speaking French without a foreign accent can also seem a long ways away. But with a strategic approach that gradually gets you closer and closer, you will get there.

French pronunciation ~ Soirées entre amis In this episode: Pol shares his thoughts on always partying with the same group of friends… To use the dictionary from French to English: Click or Tap maroon words in the story below. Learn French online one fun story at a time; also improve your pronunciation with integrated French pronunciation audio and remember French vocabulary easily through short stories. Practice is the only way, don’t delay.

Printable Moroccan Tile Designed Labels These really beautiful labels are designed with a Moroccan Tile Quatrefoil Pattern. These labels are free to download and are in editible PDF templates. Use them for just about anything including soap, gift, packages, candles and more. Included are round labels, address labels and water bottle size labels. July 2012 In the first week of school brown bags are sent home with each student. Students fill them with items representing each criteria. Once at school we share some of our contents all together. prononciation - All French phonemes in one sentence? - French Language Stack Exchange Regarding: "The first sentence lacks [ɑ] (a distinct phoneme from [a] in most French dialects), [h] (only found in a few interjections) and [ŋ] (found in some English imports, not merged with [ng] by all speakers). Apart from the lack of [h], I think there are speakers for which it works." According to:

Madame Belle Feuille: j'aime lire - teaching reading in grade 1 French Immersion What's your routine for teaching reading and specifically French sound blends in grade 1? Here's an overview of mine. September to December we review the letter sounds from kindergarten using Jolly Phonics. Sound blends are introduced over 10 weeks beginning in January. Number of phonemes (vowels, consonants) by language in Europe - Linguistics A phoneme is a sound, or set of similar speech sounds, which are perceived as a single distinctive sound by speakers of the language or dialect in question. For example, the "c/k" sounds in cat and kitten represent the English phoneme /k/. Phonemes are divided in vowels and consonants. There are also semi-consonants like /j/ and /w/, which for practical purposes will be listed as consonants here. Since some languages regard diphthongs (and triphthongs) as distinct phonemes and others don't, in order to clarify the comparison, diphthongs are counted separately from vowels. As diphthongs are merely combinations of vowels existing in a language, they won't be taken into account for the total of phonemes, so as not to count the same vowel phonemes multiple times.