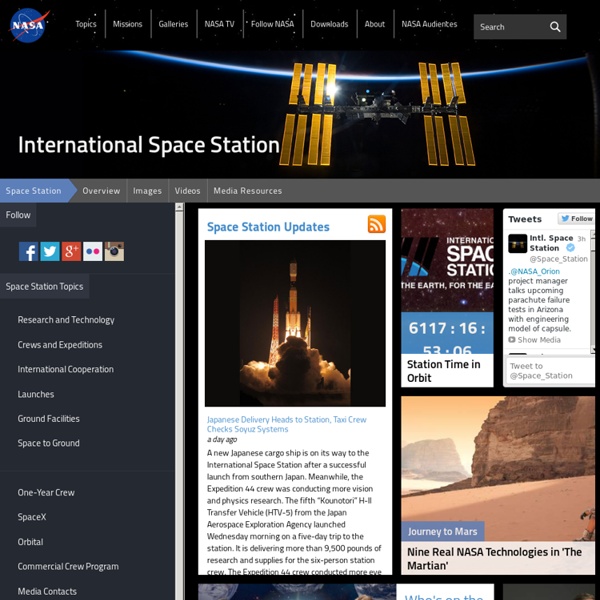 Japanese Delivery Heads to Station, Taxi Crew Checks Soyuz Systems a day ago A new Japanese cargo ship is on its way to the International Space Station after a successful launch from southern Japan. Meanwhile, the Expedition 44 crew was conducting more vision and physics research. The fifth “Kounotori” H-II Transfer Vehicle (HTV-5) from the Japan Aerospace Exploration Agency launched Wednesday morning on a five-day trip to the station. It is delivering more than 9,500 pounds of research and supplies for the six-person station crew.

Your Age on Other Worlds Want to melt those years away? Travel to an outer planet! <div class="js-required"><hr> This Page requires a Javascript capable browser <hr></div> Advanced Composition Explorer (ACE) Home Page Advanced Composition Explorer (ACE) Meetings/Workshops Latest 4-day Browse Plot ACE in the News Mission Overview | Science Center | Public Outreach | Science News | Publications | Online DataPersonnel | Picture Gallery | Other Links | ACE Guest Investigators ACE Instruments Stephen Hawking: 'There is no heaven; it's a fairy story' A belief that heaven or an afterlife awaits us is a "fairy story" for people afraid of death, Stephen Hawking has said. In a dismissal that underlines his firm rejection of religious comforts, Britain's most eminent scientist said there was nothing beyond the moment when the brain flickers for the final time. Hawking, who was diagnosed with motor neurone disease at the age of 21, shares his thoughts on death, human purpose and our chance existence in an exclusive interview with the Guardian today.

Near Earth Objects Near-Earth Objects (NEOs) are comets and asteroids that have been nudged by the gravitational attraction of nearby planets into orbits that allow them to enter the Earth's neighborhood. Composed mostly of water ice with embedded dust particles, comets originally formed in the cold outer planetary system while most of the rocky asteroids formed in the warmer inner solar system between the orbits of Mars and Jupiter. The scientific interest in comets and asteroids is due largely to their status as the relatively unchanged remnant debris from the solar system formation process some 4.6 billion years ago. The giant outer planets (Jupiter, Saturn, Uranus, and Neptune) formed from an agglomeration of billions of comets and the left over bits and pieces from this formation process are the comets we see today. Likewise, today's asteroids are the bits and pieces left over from the initial agglomeration of the inner planets that include Mercury, Venus, Earth, and Mars.

The Incredible Beauty of the Orion Nebula Learn about the beauty of the Orion Nebula. Photo: NASA Goddard Space Flight Center The Orion Nebula is one of the brightest in the night sky and lies south of Orion’s Belt. It is 1344 (plus or minus 20) light years away and is the closest huge star formation area to earth. As such, it is the most photographed in the night sky and has taught us much about star and planetary formation. The Solar System: The Sun, Planets, Dwarf Planets, Moons, Asteroids, Comets, Meteors, and Solar System Formation Our solar system is filled with a wide assortment of celestial bodies - the Sun itself, our eight planets, dwarf planets, and asteroids - and on Earth, life itself! The inner solar system is occasionally visited by comets that loop in from the outer reaches of the solar system on highly elliptical orbits. In the outer reaches of the solar system, we find the Kuiper Belt and the Oort cloud.

ISS (ZARYA) MUSK WANTS TO MAKE FALCON ROCKETS FULLY REUSABLE - SpaceX chief Elon Musk said last week he is “fairly confident” his company’s Falcon rockets can be made fully reusable within a couple of years, suggesting a renewed emphasis on outfitting upper stages for a scorching re-entry after engineers shelved the idea to focus on landing the launcher’s bigger booster stage. The launch firm revealed a concept to recover and reuse both stages of the Falcon 9 rocket in 2011, but visible technical progress has been limited to the first stage in the last few years. Landing and relaunching the Falcon 9’s first stage presented a lesser challenge to SpaceX’s engineers, and the booster is the most valuable part of the rocket, representing about 70 percent of its total cost. More (Source: SpaceFlight Now - Apr 12) THIS STARTUP WANTS TO BUILD A NANO SATELLITE FLEET FOR THE INTERNET OF THINGS - We're hurtling towards a future where everything from cows to toasters will be internet-connected.

Moon Phases Software Dear Friend, f you are interested in ... (Check any that apply to you.)