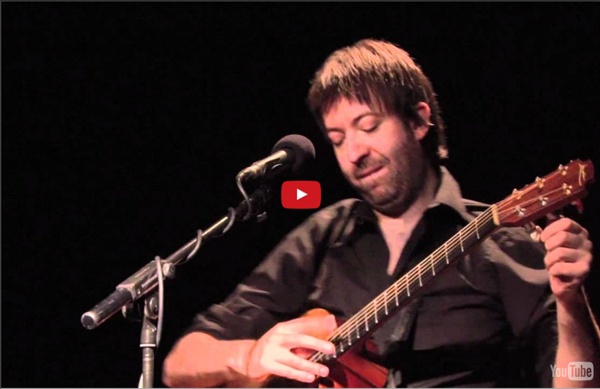 Brian and Jenn Johnson – Bethel Music Here is Love Love Came Down Undone New Songs from Bethel Music Daxophone,experimental musical instrument invented by Hans Reichel,bowed and plucked idiophone The Daxophone was invented by Hans Reichel, and is a musical instrument of the friction idiophone category. It consists of a thin wooden blade fixed in a wooden block, which holds one or more contact microphones, and is usually mounted on a tripod. Most often, it is played by bowing the free end, but it can also be struck or plucked, which propagates sound in the same way a ruler halfway off a table does. These vibrations then continue to the wooden-block bass, which are then amplified by the contact mics. A wide range of voice-like timbres can be produced, depending on the shape of the instrument, the type of wood, where it is bowed, and where along its length it is stopped with a separate block of wood called the "Dax".

Top 10 Free Ways To Discover New Music Online Bored with your music and want to discover some new bands or singers? There are two main ways you can do that online. You can use services which create music maps, allowing you to explore artists similar in genre to the artists you already listen to. Or you can use music blogs and websites that showcase independent or up-and-coming artists, whether the music is being reviewed, or posted by the musicians themselves. Some of these websites have a community built around them, which gives fans the opportunity to interact directly with these new talents. Here is a list of 10 free sites to discover new music. Infinite Jukebox Lets You Listen to an Ever-Changing Version of Your Favorite Song, Forever Do you really, really like one particular song – enough to listen to it forever? Well, now you can. Seriously, you can now start your favorite song and hear it played in random variations until the end of time.

Grammy Award for Best Instrumental Composition The Grammy Award for Best Instrumental Composition has been awarded since 1960. The award is presented to the composer of an original piece of music (not an adaptation), first released during the eligibility year. In theory, any style of music is eligible for this category, but winning compositions are usually in the jazz or film score genres. The Grammy is awarded to the composer(s) of the music, not to the performing artist, except if the artist is also the composer. Video Game Music You will get very nostalgic as I did listening to these old memories. I almost dropped a tear while listening no Pokemon Pallet Town theme song. So, did you get nostalgic after hearing some of your childhood classics? The times when you have played these games with your school friends or even at the university or at bars.

Songs So Bass-y, So Loud They'll Destroy My Subwoofers I am a 34-year-old college sophomore Requested by too old to be a college student · Compiled by bumbee …and I’m a 28-year-old senior. Cheers, mate! (There are some songs that are suposed to make you feel cool about that.) 7 Alternatives to Pandora andÂ Last.FM Whether you are annoyed by the ads on Pandora, the limited number of skips, or the abyss of cruel 30-second song teasers from Last.FM, many online listeners are growing weary of mainstream methods of hearing new music. While the Pandora algorithm is strong, and the Last.FM related artists tool is pretty useful, don’t fool yourself in to thinking that there aren’t other great ways to expose yourself to new music in the depths of cyberspace. Here are 7 alternatives to Pandora and Last.FM that will infuse your day with an uninterrupted stream of music that large record companies haven’t managed to squash under their thumbs yet. StumbleAudio

This Guy is great at what he does. by aaronifill Aug 22