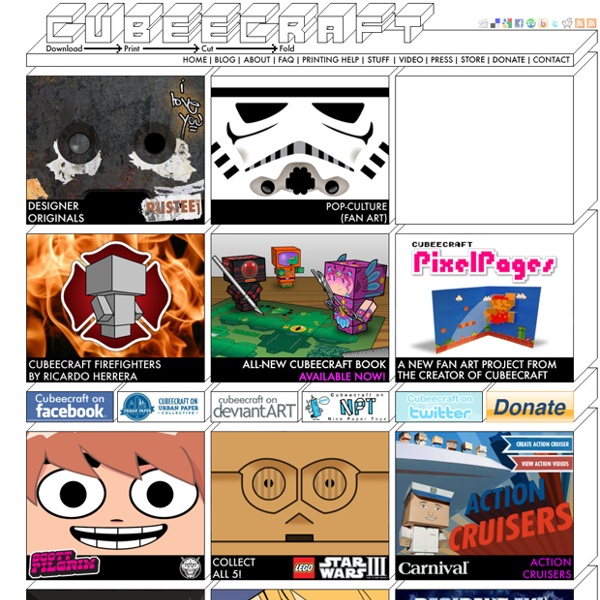 Digitprop - Paper design This is the official announcement for the papercraft alphabet I just finished uploading. That was quite some work, especially with two hyperactive kids climbing all over me while I am typing. By the way, if you speak German: Hätte auch auf Deutsch funktioniert. Anyway, the alphabet is now complete – a collection of 26 papercraft templates for all letters 0f the alphabet, each representing an animal, thing, or people starting with that letter: You will find the complete list of templates here. You can use them for education, as toys, or to spell out whatever message you want to get across. Internal Landscapes: Sweeping Abstract Oceans by Samantha Keely Smith Artist Samantha Keely Smith paints abstract oceanic landscapes that are at once menancing and serene, a clash of light and color that she refers to as “internal landscapes.” Using oil paint, enamel, and shellac, Smith uses an additive and subtractive process by partially destroying her progress several times before completion. This cyclical process, much like the timeless crash of ocean tides against the shore, adds an additional level of texture to her work.

Typeset In The Future Right from the opening scene, we're treated to Kubrick's love of bold, clean, sans-serif typography: This title card is set in Gill Sans, one of the all-time classic sans-serif fonts. Perhaps surprisingly, the zeroes in ‘2001’ appear to be set with the Gill Sans capital letter O (shown below on the left), rather than its zero character (shown on the right): After introducing us to Albertus, the Dawn Of Man turns out to be typographically unremarkable. Hloom - Free Resume Templates If resume formatting is not your thing, you can get help from an online resume builder. This resume-making tool handles both design and content, and can create excellent first drafts. The search for work is a race, and resume builders are starting blocks. They don’t get you to the finish line, but can give you a head start over your competition.Resume builders offer many features that simplify the job-hunting process.

s Best Photos of model and papercraft Flickr Hive Mind is a search engine as well as an experiment in the power of Folksonomies. All thumbnail images come directly from Flickr, none are stored on Flickr Hive Mind. These photos are bound by the copyright and license of their owners, the thumbnail links take to you to the photos (as well as their copyright and license details) within Flickr. {Valentines day} pixelated popup card I‘ve been scratching my head trying to come up with a card for my hubby {AKA the non-romantic type}. I finally decided to make this pixely popup heart card! They are really minimal (which I love) and take about 20 minutes to make (that includes the card, insert and envelope). You can even make some pixely confetti to put inside the card (if you are a big kid like me!). Full instructions and printable templates below!

Nunzio Paci’s Graphite and Oil Paintings Merge Nature and Anatomy Italian artist Nunzio Paci works with pencil and oil paints to create strange amalgamations of plants and animals in what he describes as an intent to “explore the infinite possibilities of life, in search of a balance between reality and imagination.” Paci currently has a solo show including several of the pieces you see here at the Palazzo del Podestà in Bologna through October 12. (via Artchipel)

The art of the tutorial: When to hold a player's hand, when to let it go Earlier this month, my Twitter feed flared up briefly with complaints about the "hand-holdy" quality of tutorials in many modern games. It subsided pretty quickly, but I thought it raised some interesting questions: Who do you build tutorials for, exactly? How have developers changed their approach to tutorial design now that games which envelop players with barely any attempt at guidance -- titles like Minecraft, Dark Souls and DayZ -- have become huge influences on the industry?