The bittersweet world of science publishing 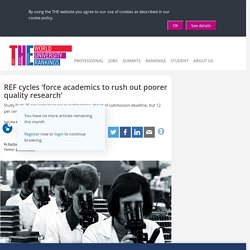 The paper by academics at the London School of Economics, UCL, the University of Oxford and the Free University of Berlin examines 190,963 publications that were submitted to the last REF and were published between 2008 and 2013, as well as 211,694 submissions to the REF’s predecessor, the research assessment exercise, dating from between 2001 and 2007. The authors find evidence that academics rushed outputs to print in order to meet the deadline for submission: the number of submissions published in 2007, ahead of the RAE deadline, was 35 per cent higher than the total for 2008, the first year covered by the last REF.

The findings emerge as UK universities prepare for the next REF, which will be published in 2021. The science that’s never been cited. The geneticist and Nobel prizewinner Oliver Smithies, who died in January aged 91, was a modest, self-effacing inventor. 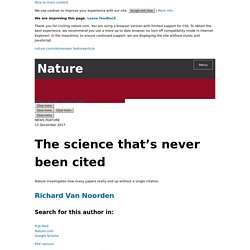 It was typical of him to trot out the tale of one of his greatest flops: a paper1 about measuring osmotic pressure published in 1953, which, as he put it, had “the dubious distinction of never being cited”. “Nobody ever quoted it, and nobody ever used the method,” he told students at a 2014 meeting in Lindau, Germany. As it happens, Smithies’ paper drew more attention than he realized: nine articles referenced it within a decade of its publication. But his mistake is understandable. Many scientists harbour false impressions about uncited research — both its extent and its impact on scholarship. One widely repeated estimate, reported in a controversial article in Science in 1990, suggests that more than half of all academic articles remain uncited five years after their publication2.

65 out of the 100 most cited papers are paywalled.       ?articles. Authors of rescinded papers see a 10 percent to 20 percent decline in citation rates for their other publications. 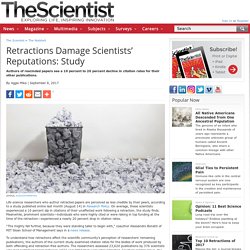 ISTOCK, KIZILKAYAPHOTOSLife science researchers who author retracted papers are perceived as less credible by their peers, according to a study published online last month (August 14) in Research Policy. On average, these scientists experienced a 10 percent dip in citations of their unaffected work following a retraction, the study finds. Meanwhile, prominent scientists—individuals who were highly cited or were raking in top funding at the time of the retraction—experienced a nearly 20 percent drop in citation rates. Germany vs Elsevier: universities win temporary journal access after refusing to pay fees.

The Dutch publishing giant Elsevier has granted uninterrupted access to its paywalled journals for researchers at around 200 German universities and research institutes that had refused to renew their individual subscriptions at the end of 2017. 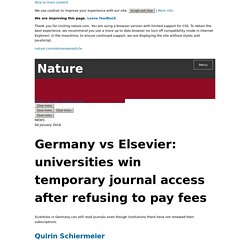 The institutions had formed a consortium to negotiate a nationwide licence with the publisher. They sought a collective deal that would give most scientists in Germany full online access to about 2,500 journals at about half the price that individual libraries have paid in the past. But talks broke down and, by the end of 2017, no deal had been agreed. Publisher won’t retract two papers, despite university’s request. Jens Förster Jens Förster, a high-profile social psychologist, has agreed to retract multiple papers following an institutional investigation — but has also fought to keep some papers intact. 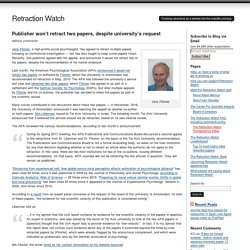 Recently, one publisher agreed with his appeal, and announced it would not retract two of his papers, despite the recommendation of his former employer. Last month, the American Psychological Association (APA) announced it would not retract two papers co-authored by Förster, which the University of Amsterdam had recommended for retraction in May, 2015. The APA had followed the university’s advice last year and retracted two other papers, which Förster had agreed to as part of a settlement with the German Society for Psychology (DGPs). But after multiple appeals by Förster and his co-authors, the publisher has decided to retain the papers as part of the scientific record. The APA reviewed the various recommendations, according to last month’s announcement: Cash bonuses for peer-reviewed papers go global.

China is well known for the generous bonuses it pays scientists who land a peer-reviewed publication in a prestigious research journal. 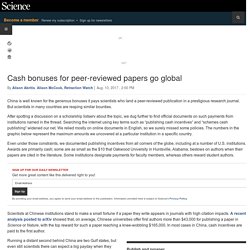 But scientists in many countries are reaping similar bounties. After spotting a discussion on a scholarship listserv about the topic, we dug further to find official documents on such payments from institutions named in the thread. Searching the internet using key terms such as “publishing cash incentives” and “schemes cash publishing” widened our net. We relied mostly on online documents in English, so we surely missed some policies. The numbers in the graphic below represent the maximum amounts we uncovered at a particular institution in a specific country. The selfish scientist’s guide to preprint posting – nikokriegeskorte. Preprint posting is the right thing to do for science and society. 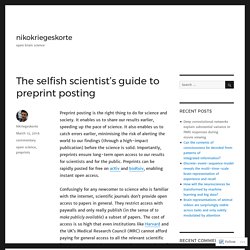 It enables us to share our results earlier, speeding up the pace of science. It also enables us to catch errors earlier, minimising the risk of alerting the world to our findings (through a high-impact publication) before the science is solid. Importantly, preprints ensure long-term open access to our results for scientists and for the public. Preprints can be rapidly posted for free on arXiv and bioRxiv, enabling instant open access. Confusingly for any newcomer to science who is familiar with the internet, scientific journals don’t provide open access to papers in general. Journals administer peer review and provide pretty layouts and in some cases editing services.

All major journals including Nature, Science, and most high-impact field-specific journals support the posting of preprints. SAGE Journals: Your gateway to world-class journal research. The More Widely Cited A Study Is, The More Likely It Is To Exaggerate, Says This Study. Got "significosis?" Here are the five diseases of academic publishing. John Antonakis John Antonakis is psychologist by training, but his research has run the gamut from showing kids accurately predict election outcomes just by looking at candidates’ faces to teaching charisma to people in leadership positions. 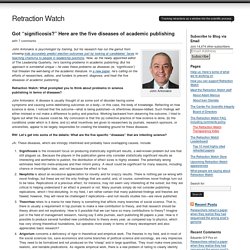 Now, as the newly appointed editor of The Leadership Quarterly, he’s tackling problems in academic publishing. But his approach is somewhat unique – he sees these problems as diseases (ie, “significosis”) that threaten the well-being of the academic literature. Does posting on PubPeer count as prior publication? Journal says yes, rejects letter rebutting campus sexual assault data. Jim Hopper Journals typically shy away from publishing data and text readers have seen before — but amidst the newly established norms of open science and data sharing, what counts as a prior publication? 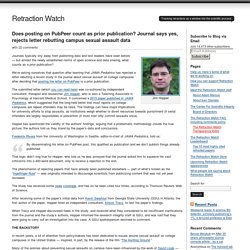 We’re asking ourselves that question after learning that JAMA Pediatrics has rejected a letter rebutting a recent study in the journal about sexual assault on college campuses after deciding that posting the letter on PubPeer is a prior publication. The submitted letter (which you can read here) was co-authored by independent consultant, therapist and researcher Jim Hopper, who is also a Teaching Associate in Psychology at Harvard Medical School. How much text recycling is okay? Are there a limited number of ways to describe the the background and methods of an experiment? 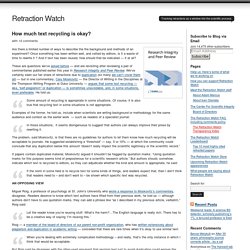 Once something has been written well, and vetted by editors, is it a waste of time to rewrite it ? And if text has been reused, how should that be indicated — if at all? Improving the replicability of empirical research. Authors retract meningitis paper over permission - but data are in a public database. A study characterizing subtypes of the bacteria that cause bacterial meningitis is being retracted after the authors didn’t have permission to publish the data, even though the data itself remain available in a public database. The paper, in PLOS ONE, relied on a laboratory collection of patient samples. In October, the authors retracted it because they “did not have permission” from the laboratory “to publish the data in their current form.” The data — anonymized — are now available at PubMLST. Here’s the retraction notice, published on October 16: Wiley published a biology paper in the wrong journal.

Wiley Periodicals is withdrawing a biochemistry paper after mistakenly publishing it in the wrong journal. The mistake took a few months to sort out. We have a new record: 80 years from publication to retraction. We have a new record for the longest time from publication to retraction: 80 years. It’s for a case report about a 24-year-old man who died after coughing up more than four cups of what apparently looked — and smelled — like pee.

According to the case report titled “Een geval van uroptoë” published in 1923, an autopsy revealed that the man had a kidney that was strangely located in his chest cavity. A case of pneumonia caused the kidney to leak urine into the space around his lungs, leading to the perplexing cough. If that sounds too crazy to be true, you’re right: This man never existed. The incredible tale of irresponsible chocolate milk research at the University of Maryland. Academic press offices are known to overhype their own research. But the University of Maryland recently took this to appalling new heights — trumpeting an incredibly shoddy study on chocolate milk and concussions that happened to benefit a corporate partner. BishopBlog: My collapse of confidence in Frontiers journals.

For shame! Nature shills for traditional Chinese medicine : Respectful Insolence. Condamnée pour avoir plagié le mémoire de son étudiant. Viewpoint: The spectre of plagiarism haunting Europe. Reflections on a foray into post-publication peer review. Math paper retracted because it “contains no scientific content” A first? Papers retracted for citation manipulation. Mighty molten powder researchers publish paper in journal twice, months apart. Science publishers don't care about the public : We Beasties. When Peer Review Falters - Room for Debate. “What I find offensive is not that they plagiarized us, it’s that they did it so badly” Why was that paper retracted? Editor to Retraction Watch: “It’s none of your damn business”

Whomp! Using invited editorial commentary to neutralize negative findings. [9] Titleogy: Some facts about titles. How journals like Nature, Cell and Science are damaging science. Thousands of scientific papers uploaded to the Pirate Bay. Are Peer-Reviewers Overloaded? Or Are Their Incentives Misaligned. Nearer, better. News Desk: More Thoughts on the Decline Effect. Research. National-Academies.org. Do we need an alternative to peer-reviewed journals? A “Consumer Reports” for Academic Journals? (and wouldn’t a Wiki work?) News / Comments / Do you really want to publish in a high-retraction journal? ONE Launches Reproducibility Initiative.

Sick of Impact Factors. Open access to research is inevitable, says Nature editor-in-chief. Do peer reviewers get worse with experience? Plus a poll. Publish-or-Perish Culture Promotes Scientific Narcissism. JournalReviewer. Impacting our young — PNAS. The Decline Effect and the Scientific Method. Publishing your science paper is only the half the job.