Philosophical Transactions of the Royal Society B: Biological Sciences. Acoustic and auditory phonetics: the adaptive design of speech sound systems. 3. 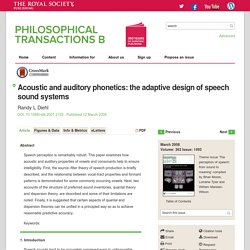 Anxiety and affective disorder comorbidity related to serotonin and other neurotransmitter systems: obsessive–compulsive disorder as an example of overlapping clinical and genetic heterogeneity. A review of the generalization of auditory learning. 2. 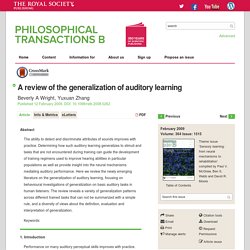 Associative sequence learning: the role of experience in the development of imitation and the mirror system. Abstract A core requirement for imitation is a capacity to solve the correspondence problem; to map observed onto executed actions, even when observation and execution yield sensory inputs in different modalities and coordinate frames. 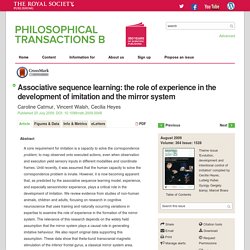 Until recently, it was assumed that the human capacity to solve the correspondence problem is innate. However, it is now becoming apparent that, as predicted by the associative sequence learning model, experience, and especially sensorimotor experience, plays a critical role in the development of imitation. Brainstem: neural networks vital for life. The brainstem is critically important for the survival of an animal. 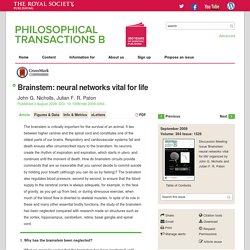 It lies between higher centres and the spinal cord and constitutes one of the oldest parts of our brains. Respiratory and cardiovascular systems fail and death ensues after circumscribed injury to the brainstem. Its neurons create the rhythm of inspiration and expiration, which starts in utero, and continues until the moment of death. How do brainstem circuits provide commands that are so inexorable that you cannot decide to commit suicide by holding your breath (although you can do so by fasting)? The brainstem also regulates blood pressure, second by second, to ensure that the blood supply to the cerebral cortex is always adequate, for example, in the face of gravity, as you get up from bed, or during strenuous exercise, when much of the blood flow is diverted to skeletal muscles. 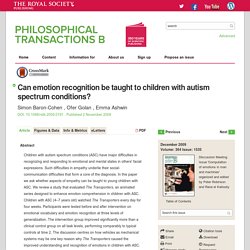 Contributions of infant word learning to language development. Abstract Infants learn the forms of words by listening to the speech they hear. 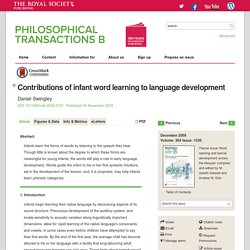 Though little is known about the degree to which these forms are meaningful for young infants, the words still play a role in early language development. Words guide the infant to his or her first syntactic intuitions, aid in the development of the lexicon, and, it is proposed, may help infants learn phonetic categories. 1. Introduction. Cultural evolution: implications for understanding the human language faculty and its evolution. Abstract Human language is unique among the communication systems of the natural world: it is socially learned and, as a consequence of its recursively compositional structure, offers open-ended communicative potential. 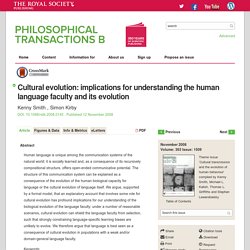 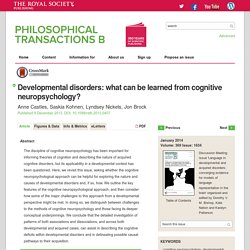 Researchers examining developmental disorders typically ask somewhat different questions than those exploring acquired disorders. Perhaps most prominently, they are often not just interested in the impairment displayed by the case and how it can be accounted for within a cognitive model, but what caused the impairment to arise in the first place. Unlike acquired cases, where the cause of the impairment is generally a known neurological event, the cause of the deficit in developmental cases is typically unknown and may be a chain of events that has affected the acquisition of key skills over an extended period of time. Researchers are naturally keen to identify these causal pathways, as they may allow early identification and even prevention of the developmental disorder in future cases.

Answering this question first requires some consideration of what is meant by ‘causes’ in a developmental context. Experience-dependent plasticity mechanisms for neural rehabilitation in somatosensory cortex. Abstract Functional rehabilitation of the cortex following peripheral or central nervous system damage is likely to be improved by a combination of behavioural training and natural or therapeutically enhanced synaptic plasticity mechanisms. 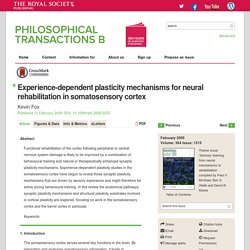 Experience-dependent plasticity studies in the somatosensory cortex have begun to reveal those synaptic plasticity mechanisms that are driven by sensory experience and might therefore be active during behavioural training. In this review the anatomical pathways, synaptic plasticity mechanisms and structural plasticity substrates involved in cortical plasticity are explored, focusing on work in the somatosensory cortex and the barrel cortex in particular. Keywords: 1. Explaining and inducing savant skills: privileged access to lower level, less-processed information. Abstract I argue that savant skills are latent in us all. 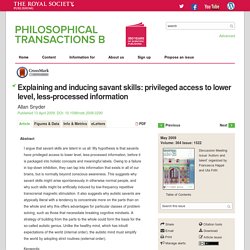 My hypothesis is that savants have privileged access to lower level, less-processed information, before it is packaged into holistic concepts and meaningful labels. Owing to a failure in top-down inhibition, they can tap into information that exists in all of our brains, but is normally beyond conscious awareness. This suggests why savant skills might arise spontaneously in otherwise normal people, and why such skills might be artificially induced by low-frequency repetitive transcranial magnetic stimulation.

It also suggests why autistic savants are atypically literal with a tendency to concentrate more on the parts than on the whole and why this offers advantages for particular classes of problem solving, such as those that necessitate breaking cognitive mindsets. From cognitive to neural models of working memory. Abstract Working memory refers to the temporary retention of information that was just experienced or just retrieved from long-term memory but no longer exists in the external environment. These internal representations are short-lived, but can be stored for longer periods of time through active maintenance or rehearsal strategies, and can be subjected to various operations that manipulate the information in such a way that makes it useful for goal-directed behaviour.

Empirical studies of working memory using neuroscientific techniques, such as neuronal recordings in monkeys or functional neuroimaging in humans, have advanced our knowledge of the underlying neural mechanisms of working memory. This rich dataset can be reconciled with behavioural findings derived from investigating the cognitive mechanisms underlying working memory. Form–meaning links in the development of visual word recognition. From temporal processing to developmental language disorders: mind the gap. Abstract The ‘rapid temporal processing’ and the ‘temporal sampling framework’ hypotheses have been proposed to account for the deficits in language and literacy development seen in specific language impairment and dyslexia.

This paper reviews these hypotheses and concludes that the proposed causal chains between the presumed auditory processing deficits and the observed behavioural manifestation of the disorders are vague and not well established empirically. Several problems and limitations are identified. Most data concern correlations between distantly related tasks, and there is considerable heterogeneity and variability in performance as well as concerns about reliability and validity. Little attention is paid to the distinction between ostensibly perceptual and metalinguistic tasks or between implicit and explicit modes of performance, yet measures are assumed to be pure indicators of underlying processes or representations. 1. 2. (a) Rapid temporal processing 3. Fronto-temporal brain systems supporting spoken language comprehension. Functional imaging of the auditory processing applied to speech sounds. Abstract In this paper, we describe domain-general auditory processes that we believe are prerequisite to the linguistic analysis of speech.

We discuss biological evidence for these processes and how they might relate to processes that are specific to human speech and language. We begin with a brief review of (i) the anatomy of the auditory system and (ii) the essential properties of speech sounds. Section 4 describes the general auditory mechanisms that we believe are applied to all communication sounds, and how functional neuroimaging is being used to map the brain networks associated with domain-general auditory processing. Section 5 discusses recent neuroimaging studies that explore where such general processes give way to those that are specific to human speech and language.

Hebbian learning and predictive mirror neurons for actions, sensations and emotions. 2. What is meant by Hebbian learning (a) Historically The term Hebbian learning derives from the work of Donald Hebb [11], who proposed a neurophysiological account of learning and memory based on a simple principle: ‘When an axon of cell A is near enough to excite a cell B and repeatedly or persistently takes part in firing it, some growth process or metabolic change takes place in one or both cells such that A's efficiency, as one of the cells firing B, is increased’ (p. 62).

A careful reading of Hebb's principle reveals his understanding of the importance of causality and consistency. He writes not that two neurons need to fire together to increase the efficiency of their connection but that one neuron needs to repeatedly (consistency) take part in firing (causality) the other. Imitation as an inheritance system. Improving the performance of the amblyopic visual system. Impulsiveness as a timing disturbance: neurocognitive abnormalities in attention-deficit hyperactivity disorder during temporal processes and normalization with methylphenidate. Abstract We argue that impulsiveness is characterized by compromised timing functions such as premature motor timing, decreased tolerance to delays, poor temporal foresight and steeper temporal discounting. Introduction. Sensory learning: from neural mechanisms to rehabilitation. Modelling reading development through phonological decoding and self-teaching: implications for dyslexia.

Neural overlap in processing music and speech. Neural mechanisms of recovery following early visual deprivation. Abstract. Perception and apperception in autism: rejecting the inverse assumption. Perceptuo-motor interactions in the perceptual organization of speech: evidence from the verbal transformation effect. Speech perception is not merely auditory but multi-modal. Several studies have shown that visual information from the speaker's face can increase the intelligibility of speech sounds (e.g. [30]). Relative time sharing: new findings and an extension of the resource allocation model of temporal processing. Role of facial expressions in social interactions. Abstract. Searching for the origins of musicality across species. 1.

Social cognitive impairment and autism: what are we trying to explain? Stone tools, language and the brain in human evolution. 1. Introduction Speculations regarding evolutionary relationships between toolmaking and language have a very long history. Talent in autism: hyper-systemizing, hyper-attention to detail and sensory hypersensitivity. The interface between spoken and written language: developmental disorders.

The Psycholinguistic Analysis of Acquired Dyslexias: Some Illustrations. Use of auditory learning to manage listening problems in children. What aspects of autism predispose to talent? Without it no music: cognition, biology and evolution of musicality. Word learning and the cerebral hemispheres: from serial to parallel processing of written words. Word learning, phonological short-term memory, phonotactic probability and long-term memory: towards an integrated framework.