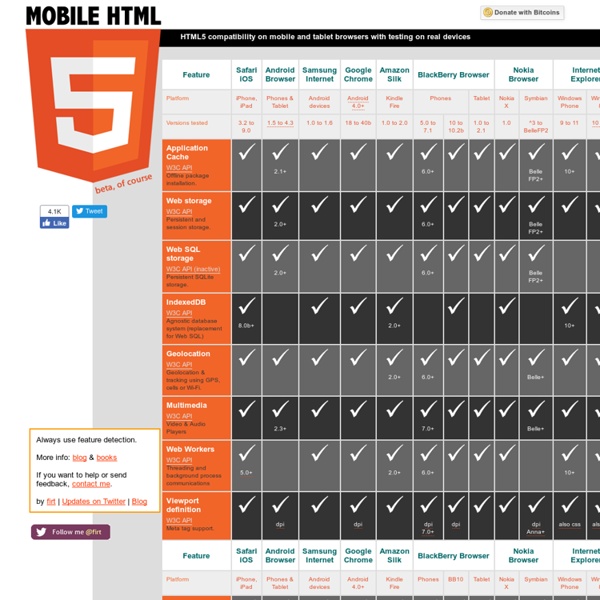 CSS3 Animation Cheat SheetGo! How it works The CSS3 Animation Cheat Sheet is a set of preset, plug-and-play animations for your web projects. All you need to do is add the stylesheet to your website and apply the premade CSS classes to the elements you want animated. Grid Designer 2 If you're familiar with the grid, a bit of design and basic typography, using this script should be pretty easy - most of the functions are pretty self-explanatory. If you're unfamiliar with grids in general, you could start by reading an excellent series of articles by web designer Mark Boulton. For those who want a real understanding of the theory of grids in relation to design and typography, I strongly recommend this book.

Top 10 Mobile Web Development JavaScript Frameworks By Jacob Gube Creating web apps and sites for the Mobile Web has its own sets of challenges and techniques. From UIs optimized for fingers instead of mouse cursors to the bandwidth limitations that most portable personal devices have, developing for mobile devices requires a paradigm shift for those of us who’ve traditionally created products aimed at desktops. Using CSS animations This is an experimental technologyBecause this technology's specification has not stabilized, check the compatibility table for usage in various browsers. Also note that the syntax and behavior of an experimental technology is subject to change in future versions of browsers as the specification changes. CSS animations make it possible to animate transitions from one CSS style configuration to another. Animations consist of two components, a style describing the CSS animation and a set of keyframes that indicate the start and end states of the animation’s style, as well as possible intermediate waypoints. There are three key advantages to CSS animations over traditional script-driven animation techniques:

HTML 5: The essentials In the first major update to the web's primary mark-up language in 10 years, the World Wide Web Consortium's (W3C) HTML 5 promises to revolutionise the way designers create sites, and the way viewers interact with them. The new proposals feature an array of new integrated functions, including new video and audio commands, and a range of benefits for designers looking to bring interactivity and rich internet functions to sites without the need for heavy coding. HTML 5 focuses largely on web applications, something not adequately catered for in previous versions, which means integration into Wordpress sites and elements from applications such as Twitter and Facebook can be more easily controlled.