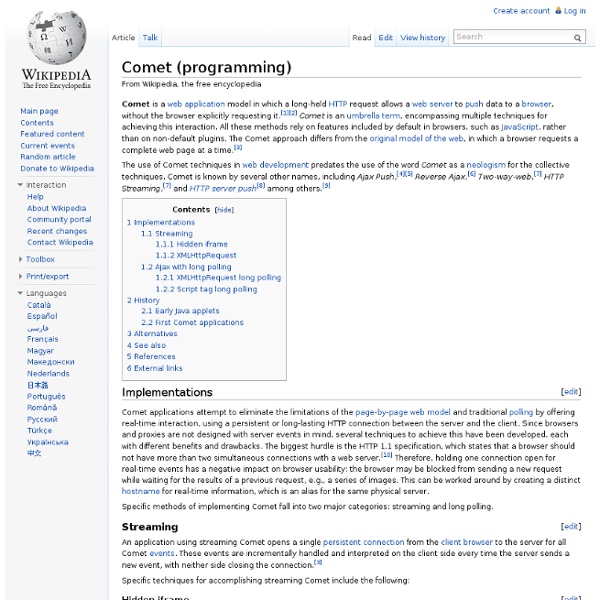 Comet is a web application model in which a long-held HTTP request allows a web server to push data to a browser, without the browser explicitly requesting it.[1][2] Comet is an umbrella term, encompassing multiple techniques for achieving this interaction. All these methods rely on features included by default in browsers, such as JavaScript, rather than on non-default plugins. The Comet approach differs from the original model of the web, in which a browser requests a complete web page at a time.[3] The use of Comet techniques in web development predates the use of the word Comet as a neologism for the collective techniques. Comet is known by several other names, including Ajax Push,[4][5] Reverse Ajax,[6] Two-way-web,[7] HTTP Streaming,[7] and HTTP server push[8] among others.[9] Even if not yet known by that name, the very first Comet implementations date back to 2000,[18] with the Pushlets, Lightstreamer, and KnowNow projects.

Introducing WebSockets: Bringing Sockets to the Web The Problem: Low Latency Client-Server and Server-Client Connections The web has been largely built around the so-called request/response paradigm of HTTP. A client loads up a web page and then nothing happens until the user clicks onto the next page. However, all of these work-arounds share one problem: They carry the overhead of HTTP, which doesn't make them well suited for low latency applications. Introducing WebSocket: Bringing Sockets to the Web The WebSocket specification defines an API establishing "socket" connections between a web browser and a server. Getting Started You open up a WebSocket connection simply by calling the WebSocket constructor: var connection = new WebSocket(' ['soap', 'xmpp']); Notice the ws:. Attaching some event handlers immediately to the connection allows you to know when the connection is opened, received incoming messages, or there is an error. The second argument accepts optional subprotocols. Cross Origin Communication

How to write a Long Polling Event Push Server with node.js – go-left Software Quick jumps: The API – Installing node – The Skeleton – POSTing Events – GETting Events – Pausing and Resuming Requests – Final Disclaimer For one of my JavaScript projects I’ve needed a push technology to push server events to my web clients. After looking at several options I’ve decided to write a long polling server with node.js. The sample code is available on gist.github git clone The long polling server performs only the task of pushing server events to the client. To make the server more useful we assume that a user can connect simultaneously with multiple browsers and an event pushed for that user is pushed to all browsers the user is currently using (one producer, many consumers). We further want the client/server communication to be robust therefore we don’t know anything about the state of the client and leave it up to the client to request the events it wants to see. The timestamp is also used by the server to expire events that are too old.

WebSockets is cool, but what can you do today? | Clay Lenhart’s Blog WebSockets is a new feature that appears to be a great way to send messages from the server to the browser, however today there isn’t much support, both in browsers and on the server in IIS and ASP.Net. Today you can use a Comet technique (in particular, Ajax with long polling ) which is available in all browsers. Using this concept, the browser makes a standard AJAX call to the server that waits until it receives a message. Asynchronous Pages and Asynchronous Controller allow you to have long running HTTP requests without using precious ASP.Net threads. On the server, there are two resource limits to consider with IIS and ASP.Net: HTTP request limits — in IIS7 the default limit is 5000 ASP.Net thread limits — in IIS7 the default limit is 12 x number of CPUs For a typical ASP.Net application (and ASP.Net MVC application), an HTTP request always uses an ASP.Net thread. Take for example an email web application that has jQuery code to check for new mail. $( function () { checkEmail(); } else {

Stream Updates with Server-Sent Events Introduction I wouldn't be surprised if you've stumbled on this article wondering, "What the heck are Server-Sent Events (SSEs)?" Many people have never heard of them, and rightfully so. Over the years, the specification has seen significant changes, and the API has taken somewhat of a backseat to newer, sexier communication protocols such as the WebSocket API. The idea behind SSEs may be familiar: a web app "subscribes" to a stream of updates generated by a server and, whenever a new event occurs, a notification is sent to the client. But to really understand Server-Sent Events, we need to understand the limitations of its AJAX predecessors, which includes: Polling is a traditional technique used by the vast majority of AJAX applications. Long polling (Hanging GET / COMET) is a slight variation on polling. Server-Sent Events on the other hand, have been designed from the ground up to be efficient. Server-Sent Events vs. Why would you choose Server-Sent Events over WebSockets? <! Demo