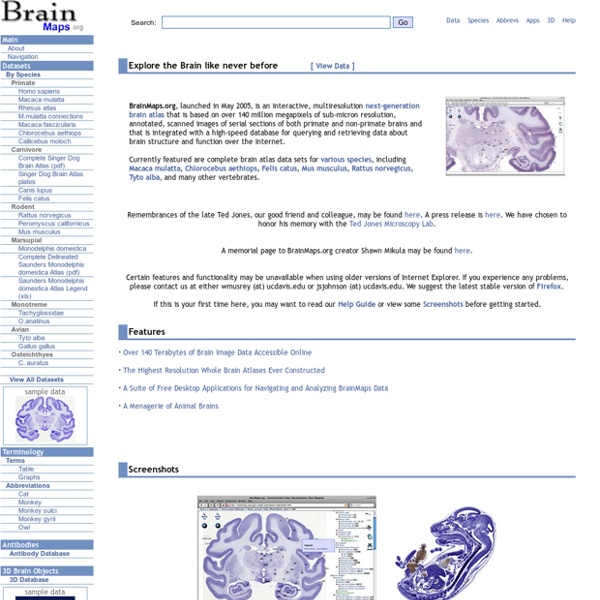 BRAINMETA.COM - NEUROSCIENCE, CONSCIOUSNESS, BRAIN, MIND, MIND-BRAIN, NEUROINFORMATICS, BRAIN MAPS, BRAIN ATLASES The Human Brain Atlas at Michigan State University Keith D. Sudheimer, Brian M. Winn, Garrett M. Kerndt, Jay M. Radiology Department, Communications Technology Laboratory, and College of Human Medicine, Michigan State University; National Museum of Health and Medicine, Armed Forces Institute of Pathology A note concerning stained sections: In this atlas you can view MRI sections through a living human brain as well as corresponding sections stained for cell bodies or for nerve fibers. Introduction and methods Acknowledgments Genes to Cognition Online Simple Mapper We developed to power this web site on the brain. Now, you can use it to organize what comes out of yours! G2C Blog: Thoughts on Thinking Twilight’s Edward and Bella – Romance or Rabies? Today, September 28th, is world rabies day! 3-D Brain The is an interactive 3-D model of the brain, with 29 structures that can be rotated in three-dimensional space. 3D Brain App released on new mobile platforms!

Stem Cell Basics: Introduction Laboratory studies of stem cells enable scientists to learn about the cells’ essential properties and what makes them different from specialized cell types. Scientists are already using stem cells in the laboratory to screen new drugs and to develop model systems to study normal growth and identify the causes of birth defects. The benefits of meditation Studies have shown that meditating regularly can help relieve symptoms in people who suffer from chronic pain, but the neural mechanisms underlying the relief were unclear. Now, MIT and Harvard researchers have found a possible explanation for this phenomenon. In a study published online April 21 in the journal Brain Research Bulletin, the researchers found that people trained to meditate over an eight-week period were better able to control a specific type of brain waves called alpha rhythms. “These activity patterns are thought to minimize distractions, to diminish the likelihood stimuli will grab your attention,” says Christopher Moore, an MIT neuroscientist and senior author of the paper. There are several different types of brain waves that help regulate the flow of information between brain cells, similar to the way that radio stations broadcast at specific frequencies. For this study, the researchers recruited 12 subjects who had never meditated before.

Imaging Traumatic Brain Injury October 2011 Imaging Traumatic Brain Injury Researchers Seek Objective Measures of Elusive Problem By David Yeager Radiology Today Vol. 12 No. 10 P. 30 Military personnel are disproportionately affected, so the U.S. Department of Defense created an institute to learn more about TBI. Since ancient times, the dilemma of correlating symptoms with causes has bedeviled medical practitioners. In many ways, this challenge has come to define what many have called the signature wound of the Iraq and Afghanistan wars: traumatic brain injury (TBI). Because TBI occurs inside the body, medical imaging has been invaluable for detecting and diagnosing severe and moderate cases, but mild TBI has proven to be much trickier to pin down. “A lot of these guys can’t pick out a box of laundry detergent in the store, anymore,” says Gerard Riedy, MD, PhD, the chief of neuroimaging at the National Intrepid Center of Excellence (NICoE). The U.S. Riedy seeks to develop an objective measure for TBI. Where To?

Scientists use brain activity analysis to reconstruct words heard by test subjects Scientists have developed technology that is able to reconstruct words heard by test subjects, through analyzing their brain activity (Photo: Elvert Barnes) Image Gallery (2 images) Last September, scientists from the University of California, Berkeley announced that they had developed a method of visually reconstructing images from peoples' minds, by analyzing their brain activity. Much to the dismay of tinfoil hat-wearers everywhere, researchers from that same institution have now developed a somewhat similar system, that is able to reconstruct words that people have heard spoken to them. Instead of being used to violate our civil rights, however, the technology could instead allow the vocally-disabled to "speak." Epilepsy patients were enlisted for the study, who were already getting arrays of electrodes placed on the surface of their brains to identify the source of their seizures. According to study leader Brian N. About the Author Post a CommentRelated Articles

SPACE Gallery Half a world away from Cairo’s Tahrir Square, an ageing American intellectual shuffles around his cluttered terrace house in a working-class Boston neighbourhood. His name is Gene Sharp and for the world’s dictators his ideas can be the catalyst for the end of their regime. Few people outside the world of academia have ever heard his name, but his writings on nonviolent revolution (most notably ‘From Dictatorship to Democracy’, a 93-page, 198-step guide to toppling dictators, available free for download in 40 languages) have inspired a new generation of protesters living under authoritarian regimes who yearn for democratic freedom. His ideas have taken root in places as far apart as Burma, Thailand, Bosnia, Estonia, Iran, Indonesia, Zimbabwe, Venezuela and now in Syria, Egypt and elsewhere in the Middle East as old orders crumble amidst the protests of their disgruntled citizens. This new film HOW TO START A REVOLUTION reveals how Gene’s ideas work in action. Followed by discussion.

Love Deactivates Brain Areas For Fear, Planning, Critical Social Assessment Love Deactivates Brain Areas For Fear, Planning, Critical Social Assessment Andreas Bartels and Semir Zeki of the Wellcome Department of Imaging Neuroscience, University College London have found using Functional Magnetic Resonance Imaging (fMRI) that love turns down activity in some areas of the brain in part so that we will not see flaws in the object of our affections. However the key result was that it's not just that certain shared areas of the brain are reliably activated in both romantic and maternal love, but also particular locations are deactivated and it's the deactivation which is perhaps most revealing about love. Among other areas, parts of the pre-frontal cortex – a bit of the brain towards the front and implicated in social judgment – seems to get switched off when we are in love and when we love our children, as do areas linked with the experience of negative emotions such as aggression and fear as well as planning. Well, consider the possibilities.

Brain Explorer Wirehead hedonism versus paradise-engineering Carbon credit A carbon credit is a generic term for any tradable certificate or permit representing the right to emit one tonne of carbon dioxide or the mass of another greenhouse gas with a carbon dioxide equivalent (tCO2e) equivalent to one tonne of carbon dioxide.[1][2][3] Carbon credits and carbon markets are a component of national and international attempts to mitigate the growth in concentrations of greenhouse gases (GHGs). One carbon credit is equal to one metric tonne of carbon dioxide, or in some markets, carbon dioxide equivalent gases. Carbon trading is an application of an emissions trading approach. The goal is to allow market mechanisms to drive industrial and commercial processes in the direction of low emissions or less carbon intensive approaches than those used when there is no cost to emitting carbon dioxide and other GHGs into the atmosphere. Definitions[edit] Types[edit] Background[edit] Emission allowances[edit] Kyoto's 'Flexible mechanisms'[edit] Emission markets[edit]