v21_i010_a003.pdf. UTA Faculty: Mike Putnam. Critically Analyzing a Speech: The Classical System Download Four elements of a speech need to be considered in order to objectively analyze the performance. 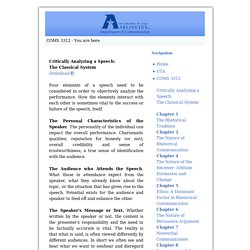 How the elements interact with each other is sometimes vital to the success or failure of the speech, itself. The Personal Characteristics of the Speaker. The personality of the individual can impact the overall performance. The Audience who Attends the Speech. The Speaker's Message or Text. The Occasion for the speech. These four elements interact in a dynamic or fluid manner. The Classical Criticism system examines speeches from a variety of parts: Invention (Chapter 11), Arrangement (Chapter 12), Style (Chapter 13), Delivery (Chapter 15) , and Memory. Invention: This refers to how speakers use the resources that are available for them. Arrangement: This refers to how speakers organize their material; the order in which their points or arguments are made. Memory: This is part of classic speech criticism but not as relevant today.

Speech Analysis: How to Critique a Speech. Published: Jan 18th, 2008 Studying other speakers is a critical skill, one of the 25 essential skills for a public speaker. 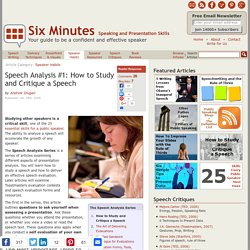 The ability to analyze a speech will accelerate the growth of any speaker. The Speech Analysis Series is a series of articles examining different aspects of presentation analysis. You will learn how to study a speech and how to deliver an effective speech evaluation. Later articles will examine Toastmasters evaluation contests and speech evaluation forms and resources. The Speech Analysis Series The first in the series, this article outlines questions to ask yourself when assessing a presentation. The Most Important Thing to Analyze: The Speech Objectives Knowing the speaker’s objective is critical to analyzing the speech, and should certainly influence how you study it.

What is the speaker’s goal? The Audience and Context for the Speech A speaker will need to use different techniques to connect with an audience of 1500 than they would with an audience of 15. Humor. Analyses of Speeches. Below you will find several speeches that I have analyzed, in whole or in part. 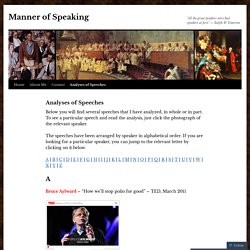 To see a particular speech and read the analysis, just click the photograph of the relevant speaker. The speeches have been arranged by speaker in alphabetical order. If you are looking for a particular speaker, you can jump to the relevant letter by clicking on it below. Bruce Aylward – “How we’ll stop polio for good” – TED, March 2011 Mark Bezos – “A life lesson from a volunteer firefighter” – TED, March 2011 Shukla Bose – “Teaching one child at a time” – TED, November 2009 Kenneth Branagh – Henry V Alberto Cairo – “There are no scraps of men” – TED, November 2011 George Clooney – Up in the Air Matt Damon – Invictus Phil Davison – Star Country Ohio Treasurer Nomination Speech – 8 September 2010 Clint Eastwood – It’s Halftime in America Morgan Freeman – Invictus Ed Gavagan – “Drowning on Sullivan Street” – The Moth, December 2007.

America’s Shameful Human Rights Record. Jimmy Carter: Universal Declaration of Human Rights Remarks at a White House Meeting Commemorating the 30th Anniversary of the Declaration's Signing. What I have to say today is fundamentally very simple. 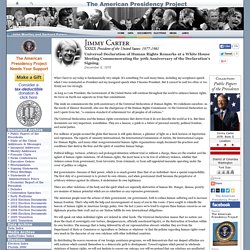 It's something I've said many times, including my acceptance speech when I was nominated as President and my inaugural speech when I became President. But it cannot be said too often or too firmly nor too strongly. As long as I am President, the Government of the United States will continue throughout the world to enhance human rights.

No force on Earth can separate us from that commitment. This week we commemorate the 30th anniversary of the Universal Declaration of Human Rights. The Universal Declaration and the human rights conventions that derive from it do not describe the world as it is. For millions of people around the globe that beacon is still quite distant, a glimmer of light on a dark horizon of deprivation and repression. Political killings, tortures, arbitrary and prolonged detention without trial or without a charge, these are the cruelest and the ugliest of human rights violations. Thank you very much.