Connecting The World Through Music 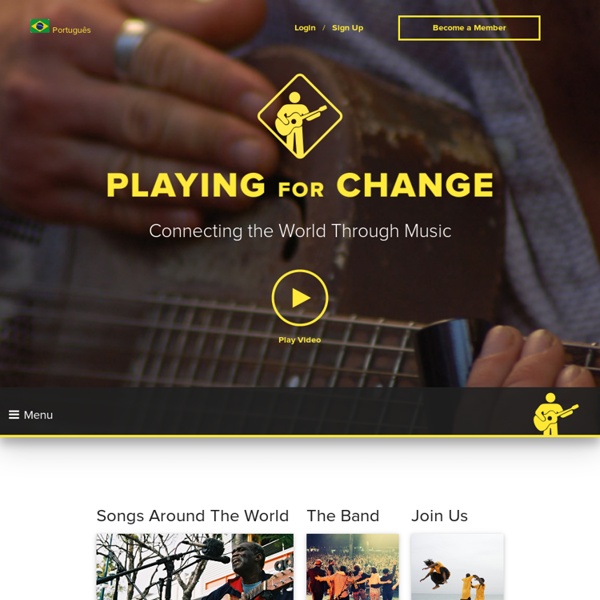 Finding musical 'diamonds' in the slums of Paradise City A program in Brazil is offering free classical music training to children in the slumsIt's empowering the children and giving them a chance at a brighter futureThere are 11 million Brazilians living in slums; more than 1 billion worldwide are in slumsTop 10 CNN Hero Thulani Madondo is educating hundreds of slum kids in South Africa Sao Paulo, Brazil (CNN) -- The violin she uses is cheap by most standards: made in China, it costs about $150. But that's an absolute fortune for Yanca Leite.

[reQ] Uh Huh Her [Discography 2007-2011] reQ by :moolassa Uh Huh Her is an indie/electropop band that was formed in January 2007 and released their first EP on July 24, 2007. The band's name came from an album by artist PJ Harvey, titled Uh Huh Her. Camila Grey, a former member of the lo-fi rock band Mellowdrone, had not released any solo material prior to joining Uh Huh Her. 20 Images That Can’t Be Unseen Some of these will enlighten you, others will frighten you, and this one right here will ruin your childhood… via via

Beethoven in the Congo: Kinshasa's classical orchestra Violin player Pauleth Masamba has been playing with the Orchestre Symphonique Kimbanguiste since the mid-1990s. "Music is one of the things that comforts me, takes off the stress and makes me happy," she says. The Kinshasa-based orchestra holds regular concerts in a bid to inspire a new generation of musicians and help locals to discover the world of classical music. Masamba, like many other members of the orchestra, lives in a typical Kinshasa neighborhood that has unpaved roads and is lined with sewage. Conductor Armand Diangienda (far right) is the founder and conductor of the Orchestre Symphonique Kimbanguiste.

How To… Embed This Infographic <a href= ‎"><img src=" title="10 How Tos" alt="How To Infographic" border="0" class="nopin" /></a><br />Source: <a href=' title='Interesting Facts'><a href=' title='Interesting Facts'>Today I Found Out</a></a> 1) How to drastically increase the life of your shaving razor Before or after you shave (I prefer before so that the blades are dry), place your jeans on a hard flat surface; then run the razor up the pant legs about 10-15 times quickly; then repeat running it down the pant legs 10-15 times quickly. No need to press that hard, but a little pressure is necessary. necessary.

Muve Music, for Mobile Users, Thrives in Shadow of Competitors In its shadow, another service, Muve Music, has quietly built one of the largest subscriber bases in the business by going after a part of the market that most digital companies have largely ignored: people who may not have computers at all. Muve, a phone-based music plan sold through Cricket Wireless, offers unlimited song downloads for $10 a month, tucked inconspicuously into a customer’s monthly cellphone bill, which ranges from $55 to $65. In many ways its users defy the conventional profile of a digital music consumer.

6 Mixer Console Control Apps Offer Complete Control - Hospitality Tech Decisions Mixer specific console control apps recreate physical control boards on your mobile device. By Curtis Emery February 14, 2013 Omnipresence is trait possessed by none, but looked for by everyone. It is a pipe dream to be in complete control of everything, let alone be in all places at once, but it would make our jobs a whole lot easier if it were possible.

Music piracy - who’s on the moral high ground? 18 July 2012Last updated at 11:46 ET Google says it already removes two million links a month on requests from rights holders. It's a battle between one of the world's most powerful companies, Google, and the trade body representing British music labels, the BPI. The increasingly bitter confrontation over what responsibility the search firm has to help in the battle against web piracy is the subject of my film for Newsnight on Wednesday evening. First Spin: Hear Oddisee's 'People Hear What They See' "I'm not a star, somebody lied / I ride the subway as a car, I'm getting by." That's Oddisee on "Do It All," the collaborative track with his DC supergroup Diamond District, from his new album, People Hear What They See. The producer/rapper just kind of throws that line out there, subtly grounding Rick Ross' hammy modesty with a gentlemanly dose of honesty. This is but one of People Hear What They See's many thoughtful takes on rap's rote subjects. If there's a concept to the album, it would be approaching the entry-level boasts and well, bullshit of rap, and turning them into true, lived-in representations of everyday life. "American Greed" is the "get money" song with a widescreen worldview of risk and reward, and "You Know Who You Are," is a track for "the haters" twisted into a celebration of those who've supported you, and a request for introspection.

Cape Verde hip hop special – African hip hop radio May 2012 The May edition of African hip hop radio is a rendez-vous with Revoltod from the Lod Escur crew, our long time contributor who started doing Cabo shows for us while he was living in Cape Verde. Now based in Rotterdam, he’s still very active in the hip hop scenes of Cape Verde as well as the Netherlands. In the second hour from the Red Light Radio studio he plays some of his productions and other hot Cabo stuff, talks about gang culture and police abusing hip hop artists back home, and about two products that are important to Cape Verdean identity: grog, an alcoholic drink, and zouk, the Antillean music that made it big within Cabo communities worldwide.