Ten more games that will make you think about life - StumbleUpon 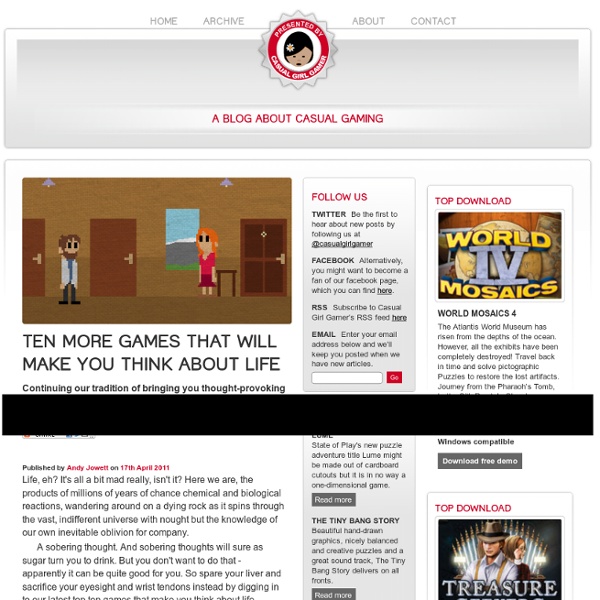 Life, eh? It's all a bit mad really, isn't it? Here we are, the products of millions of years of chance chemical and biological reactions, wandering around on a dying rock as it spins through the vast, indifferent universe with nought but the knowledge of our own inevitable oblivion for company. A sobering thought. And sobering thoughts will sure as sugar turn you to drink. But you don't want to do that - apparently it can be quite good for you. 1 One Chance Here's something to think about - every decision we ever make, no matter how seemingly inconsequential it may be at the time, has the potential to fundamentally change our lives forever. Of course, the thing about decisions is you normally only get one chance to make them and, once they're made, you can't go back. You are the super-smart scientist whose discovery appears to have conquered one of the most devastating diseases known to humankind. 2 A Mother in Festerwood Kids, eh? Oh, they'll be back when they want feeding. 5 Prior

Bizarre Websites On Which You Can Kill Time With Style - Smashing Magazine Modern Web-building technologies allow designers to realize their most daring and creative ideas. Enhanced interactivity and a remarkable visual appearance can be achieved by means of such tools as Flash, JavaScript and Papervision3D, to name just a few. These strengths usually impress and entertain visitors and thus are often used for conceptual artistic presentations and promotional campaigns. In this post, you’ll find a collection of amusing websites that, by combining unconventional (and sometimes bizarre) ideas and clever JavaScript and Flash effects, will entice you to play on them for an embarrassing long time.

Another 20 games that make you think about life - StumbleUpon First we gave you five. Then we gave you ten. Now we are giving you 20 games that make you think about life. GunBlood Western Shootout - Flash Shooting Games - OfficeGameSpot Game Overview: Attempt to become the most feared gunslinger in the land by defeating all those who stand in your way. GunBlood pits your reflexes against nine computer opponents in one-on-one gun fights and includes four bonus rounds. High scores are tabulated according to accuracy, speed, and your life remaining after each round. At the start of each level, the player and computer opponent each start with 6 shots. If both players are alive and no shots are remaining, the match will end in a draw to be re-played. During each of the four bonus rounds, the goal is to hit the target objects and NOT the assistant.

Amazing Places To Experience Around the Globe (Part 3) - StumbleUpon Devetashkata Cave - Bulgaria Ben Bulben at County Sligo, Ireland Shark Island - Sydney New Steampunk Influenced Game In-between waiting for Bioshock Infinite and slaying the last few dragons in Skyrim, there doesn’t seem to be much coming out in the way of video games. And then I spotted Black Gold Online. As you can see, there are strong Steampunk elements in the graphics. John Conway's Game of Life The Game The Game of Life is not your typical computer game. It is a 'cellular automaton', and was invented by Cambridge mathematician John Conway. This game became widely known when it was mentioned in an article published by Scientific American in 1970.

Abandoned Yugoslavian Monuments by Jan Kempenaers Abandoned Yugoslavian Monuments by Jan Kempenaers While Yugoslavia has long since dissolved, abandoned monuments remain that recall the nation’s glory in the second world war. Photographer Jan Kempenaers has traveled throughout the Balkans to photograph these wild, strange structures that have lost much of their cultural relevance. In various states of disrepair, these monuments (some buildings, other sculptures) represent an era of modern and brutalist architecture that defined this time period in the socialist East. Today, they appear alien, odd and empty, stark reminders of a struggle long since forgotten by a nation that no longer exists. Top 10 most relaxing online casual games 1Music Catch When ever things start getting to me - whether it be looming deadlines at work, an aggressive boss or horrible events taking place in the world - there is one game I turn to. Magically, after a few minutes play, all my worries fade away and I feel relaxed and revived and full of new optimism. No, the game is not called Heroin.

making buildings in foamboard miniature building construction in foamboard by Emmanuel Nouaillier Emmanuel Nouaillier shows how to scratch build and age miniature structures. This is will introduce my personal approach and techniques for scratch building and ageing buildings, pertaining to the typical northern French urban landscape of the 1940s and early 50s. I believe that a proper rendition of textures and adequate weathering of the different elements is important when making a miniature scene, where the optimal development of each small detail of a diorama becomes more a necessity to modellers who want to show, with utmost realism, models that are better detailed and weathered I will explain stage by stage in future articles how to create peculiar materials and elements and how to give the models ‘life’ while employing generic methods.