Top 10 enterprise tools for cross-platform mobile development. With so many mobile devices proliferating in the enterprise, organizations that want to create applications to boost their workers' productivity can find the task challenging. 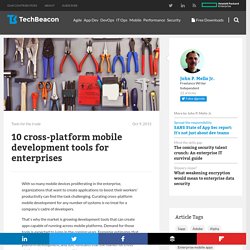 Curating cross-platform mobile development for any number of systems is no treat for a company's cadre of developers. That's why the market is growing development tools that can create apps capable of running across mobile platforms. Demand for those tools is expected to jump in the coming years. Forrester estimates that more than 60 percent of enterprises are already engaged in cross-platform development, and IDC forecasts that the market for cross-platform development tools will increase at a compound annual growth rate of more than 38 percent, reaching $4.8 billion by 2017. Meanwhile, Gartner expects more than 20 million enterprise apps to be developed by 2018. 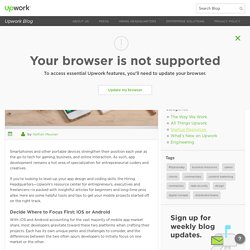 As such, app development remains a hot area of specialization for entrepreneurial coders and creatives. If you’re looking to level-up your app design and coding skills, the Hiring Headquarters—Upwork’s resource center for entrepreneurs, executives and freelancers—is packed with insightful articles for beginners and long-time pros alike. Here are some helpful tools and tips to get your mobile projects started off on the right track. Decide Where to Focus First: iOS or Android With iOS and Android accounting for the vast majority of mobile app market share, most developers gravitate toward these two platforms when crafting their projects.

For developers who aren’t already neck deep in both mobile app markets, “Android vs. iOS: Which Should I Learn First?” Learning curve: Java (Android) vs. Boost Your App’s Reach with Zapier Integration. 5 Cross Platform App Dev. Tools in 2016. The mobile application market is soaring registering a 58 percent growth in 2015 in app usage with mobile users spending 117 percent more time with their handsets. 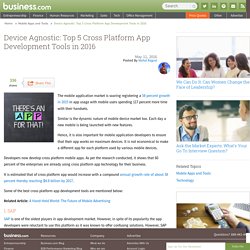 Similar is the dynamic nature of mobile device market too. Each day a new mobile is being launched with new features. Hence, it is also important for mobile application developers to ensure that their app works on maximum devices. It is not economical to make a different app for each platform used by various mobile devices. Developers now develop cross platform mobile apps. It is estimated that of cross platform app would increase with a compound annual growth rate of about 38 percent thereby reaching $4.8 billion by 2017.

Some of the best cross platform app development tools are mentioned below: Related Article: A Hand-Held World: The Future of Mobile Advertising SAP is one of the oldest players in app development market. The latest tool helps the client to develop cross platform application with a single HTML5 code. 8 Essential iOS App Development Tools. iOS is by far the most popular and advanced mobile operating system developed by Apple. 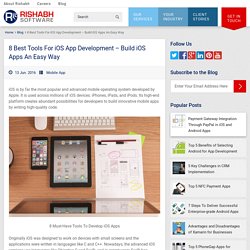 It is used across millions of iOS devices: iPhones, iPads, and iPods. Its high-end platform creates abundant possibilities for developers to build innovative mobile apps by writing high-quality code. 8 Must-Have Tools To Develop iOS Apps Originally iOS was designed to work on devices with small screens and the applications were written in languages like C and C++. Nowadays, the advanced iOS versions use languages like Objective-C and Swift, and in recent years Swift has garnered much attention which made iOS an attractive prospect for developers.

However, iOS application development is bringing in new fascinating trends as iPhones and iPads have emerged to be the most popular devices. Jazzy: This iOS development tool is a code used for the documentation of any iOS app. Rishabh Software specializes in building native iOS mobile apps tailored to various requirements of the clients. Forbes Welcome. 10 simple tools for building mobile apps fast. EachScape is a unified, cloud-based, drag-and-drop editor for native iOS and Android apps, as well as HTML5 Web apps. 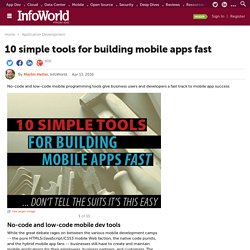 That might seem like an odd combination, but it works well. In addition, EachScape includes mobile back-end services for apps you build with its platform, Web preview for all apps, and an online build service. The architecture that allows EachScape to build iOS, Android, and HTML5 apps from a drag-and-drop editor (the Cloud Studio) depends on blocks and modules, as well as layouts and actions. Under the hood, EachScape has implemented a set of classes in Objective-C for iOS, Java for Android, and CoffeeScript for Web apps that correspond to ads, buttons, containers, controls, data connectors, data input, HTML, images, maps, media, navigation, placeholders, RESTful remote queries, social networks, and text. Advanced developers can build new blocks and modules for EachScape to extend its capabilities, using its SDKs.