12 Old Words that Survived by Getting Fossilized in Idioms 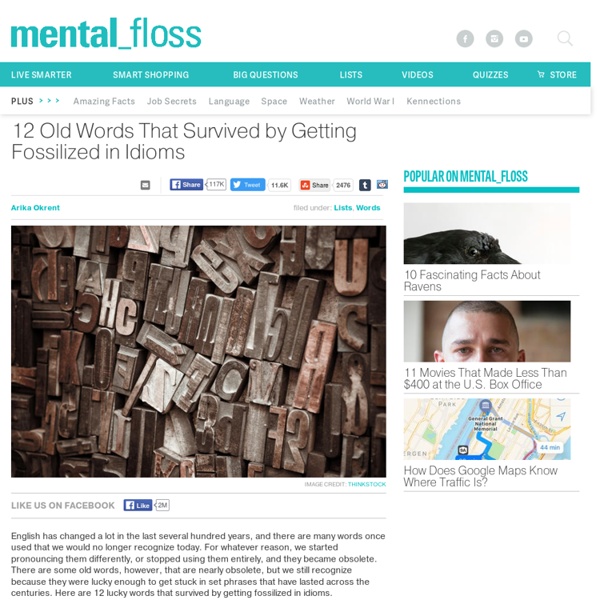 English has changed a lot in the last several hundred years, and there are many words once used that we would no longer recognize today. For whatever reason, we started pronouncing them differently, or stopped using them entirely, and they became obsolete. There are some old words, however, that are nearly obsolete, but we still recognize because they were lucky enough to get stuck in set phrases that have lasted across the centuries. Here are 12 lucky words that survived by getting fossilized in idioms. 1. wend You rarely see a "wend" without a "way." 2. deserts The "desert" from the phrase "just deserts" is not the dry and sandy kind, nor the sweet post-dinner kind. 3. eke If we see "eke" at all these days, it's when we "eke out" a living, but it comes from an old verb meaning to add, supplement, or grow. 4. sleight "Sleight of hand" is one tricky phrase. 5. dint "Dint" comes from the oldest of Old English where it originally referred to a blow struck with a sword or other weapon. 7. fro

16 Words That Are Much Older Than They Seem | Mental Floss - Iceweasel Every generation likes to think it invented slang anew, but often the latest words are actually very old. Here are 16 words that are much older than they seem. (The example quotes all come from the Oxford English Dictionary.) 1. A common lament in pieces about “kids these days and their social whatsawhozits” is “when did ‘friend’ become a verb?!” 2. If you could friend someone, it was only natural, according to the productive rules of English word formation, that you could unfriend them too. 3. In the 1880s “dude” had a negative, mocking ring to it. 4. Where “dude” goes, “dudery” follows. 5. “Hang out” has been used as a verb for passing the time without doing much in particular since at least the 1840s. 6. Puke has been around since the 16th century. 7. Hipster shows up in a 1941 dictionary of “hash house lingo,” meaning “a know-it-all.” 8. To me, “babe” in the sense of “hot chick” has a very 1970s ring to it. 9. 10. Does “outasight” bring to mind a '60s hippie? 11. No frigging way!

11 Weirdly Spelled Words—And How They Got That Way | Mental Floss - Iceweasel Why is English spelling so messed up? We get the same sounds spelled different ways (two, to, too), the same spellings pronounced different ways (chrome, machine, attach), and extra letters all over the place that don't even do anything (knee, gnu, pneumatic). There aren't always good reasons for these inconsistencies, but there are reasons. Here's a brief look at the history of English spelling told through 11 words. 1. Thought Way back in the 600s, Christian missionaries arrived in Anglo-Saxon England with their Roman alphabet and tried to make it fit the language they found there. Later, English lost the /x/ sound, but only after the spelling conventions had been well established. 2. Two things happened in the early 1500s that really messed with English spelling. 3. Woden was an Anglo-Saxon god associated with both fury and poetic inspiration. 4. Getty Images 5. 6. Receipt is also a victim of the Latinizing craze. 7. 8. 9. 10. 11. That's how you spell it, and say it, in Italian.

Archaeology: The milk revolution : Nature News & Comment - Iceweasel In the 1970s, archaeologist Peter Bogucki was excavating a Stone Age site in the fertile plains of central Poland when he came across an assortment of odd artefacts. The people who had lived there around 7,000 years ago were among central Europe's first farmers, and they had left behind fragments of pottery dotted with tiny holes. It looked as though the coarse red clay had been baked while pierced with pieces of straw. Looking back through the archaeological literature, Bogucki found other examples of ancient perforated pottery. Free podcast Mark Thomas talks about human evolution and the rise of dairying. The mystery potsherds sat in storage until 2011, when Mélanie Roffet-Salque pulled them out and analysed fatty residues preserved in the clay. Roffet-Salque's sleuthing is part of a wave of discoveries about the history of milk in Europe. Strong stomachs Young children almost universally produce lactase and can digest the lactose in their mother's milk. Powerful gene Milk or meat

Arguing Over Jesus by Christopher Carroll | NYRgallery In the week since Reza Aslan’s Fox News webcast interview, his book, Zealot: The Life and Times of Jesus of Nazareth has become the number one best selling title on Amazon and reached the top of the New York Times Best Seller list. In Zealot, Aslan argues that Jesus of Nazareth would have borne little resemblance to the Jesus of the Gospels. Jesus of Nazareth, was, in Aslan’s view, a political incendiary, a dissident who railed against Roman rule and actively encouraged sedition. The early church, he suggests, subsequently “transformed Jesus from a revolutionary zealot to a Romanized demigod.” For all of the controversy surrounding Aslan and his book, the work follows in a long tradition of study of the historical figure of Jesus—a subject that has provoked vigorous debate in The New York Review’s pages over the decades. E.P. He also describes the surprising origins of this question, among Christians who had become “impatient with and often hostile to creedal dogma as a whole”:

Inequality of Opportunity Begins at Birth Equality of opportunity means that we are not a caste society. Who we will become is not fixed by the circumstances of our births. Some children will do better than others, but this should result from a fair competition. Nearly every American politician espouses a commitment to equality of opportunity. We must continue to fight for equal opportunity to a quality education for all children. I wouldn’t be surprised if many American politicians said the same thing yesterday. But we don’t appreciate how deep inequality runs. There are three important facts packed into this slide. These facts are unsurprising, until you notice how powerful the income effect is. Lastly, notice how the age lines are much more dispersed on the left (poorest) side of the graph than the right (richest) side of the graph. Jason Fletcher has a new study in which he looked at the parent-reported health of a cohort of children from kindergarten through 8th grade. huge inequality in health at birth. @Bill_Gardner

The Communist movement and gay rights: the hidden history June is International Gay Pride month - a concept which in itself would have been unthinkable a half-century ago. In looking back on the history of what we today call the struggle for Gay Rights or Gay Liberation, the Communist and Socialist contributions to that struggle are deserving of both recognition and analysis. And the role of militancy itself also needs to be remembered, both by gay and straight people, if the gains of recent decades are not to be reversed. In part one of this essay, "The Communist Movement and Gay Rights," which was posted on the PA blog, I dealt broadly with the struggles of the Communist movement against the exploitation of the working class and the oppression of colonized peoples and national minorities. Here, in part two, I will look more specifically at socialist and communist responses to homophobia and gay rights, looking particularly at the most important US figure in the struggle for Gay Liberation, Harry Hay. The Communist Movement and Gay Rights