Exactly What The Common Core Standards Say About Technology 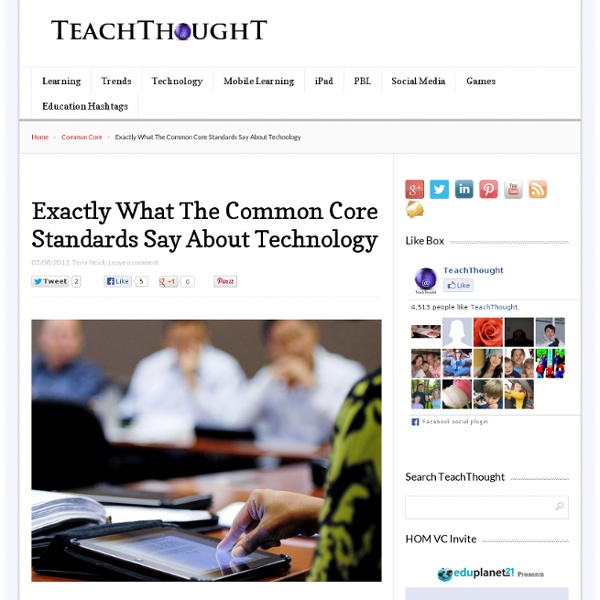 The Common Core Standards, the national academic standards for K-12 schools in the United States, have now been adopted by 47 of the 50 states in the U.S. This makes them the pre-eminent source of what is being taught in the vast majority of public schools in America. Much has been made in the blogosphere and across social media of the changes compared to former academic standards that were dictated at a state level. Reactions usually involve the added demand these standards place on text complexity and general rigor. Since they’re only available for English-Language Arts and Math, it’s difficult to get a full picture for how they will impact public education, but some inferences can be made based on the set of ELA standards. TeachThought’s focus is on the intersection of education and technology, and the Common Core certainly takes aim at in-depth student technology use. Common Core Standards W= Writing RI= Reading: Informational SL= Speaking and Listening W.4.6. RI.8.7. SL.11-12.2.

New Padagogy Wheel Helps You Integrate Technology Using SAMR Model Sometimes a visual guide comes along and it just makes total sense. That’s how I felt about Allan Carrington’s clever ‘Padagogy Wheel‘ which we featured on Edudemic last week. Check out the previous version then view the one below to see the differences. But I was quite amazed this morning when I saw that the Padagogy Wheel had been updated. This new Padagogy Wheel (which honestly is less about iPads and more about technology integration now) should encourage you to focus on redefining your current standards, the current role tech plays in your classroom, and just about everything else. Want to print out the poster? The Padagogy Wheel by Allan Carrington is licensed under a Creative Commons Attribution 3.0 Unported License.

What is ConnectEd? Ed. note: To highlight the importance of connected classrooms, the White House held a virtual "show and tell" with three schools that are embracing technology and digital learning. Watch the full hangout at wh.gov/show-and-tell. President Barack Obama and Health and Human Services Secretary Kathleen Sebelius, right, talk with students while visiting a classroom at the Yeadon Regional Head Start Center in Yeadon, Pa., Nov. 8, 2011. (Official White House Photo by Pete Souza) Preparing America’s students with the skills they need to get good jobs and compete with countries around the world relies increasingly on interactive, individualized learning experiences driven by new technology. But today, millions of students lack access to the high-speed broadband internet that supports this sort of learning technology. The fact is, schools without internet access put our students at a disadvantage. Here’s how ConnectED works: Upgrading connectivity Training teachers

SchoolSpeedTest Assessing Tech Readiness for Common Core: What IT Pros Say A year from now, districts around the country will make final preparations for the start of the 2014–2015 school year. For most of them, those preparations will include ensuring that their networks are equipped to handle the new online student ­assessments that align with the Common Core State Standards. Training staff to administer those tests, as well as amassing enough computers for ­students to complete them, also are high priorities. Achieve and the U.S. Education Delivery Institute, two nonprofit ­organizations dedicated to ­improving education at both the school and state levels, have developed a comprehensive workbook that maps out clear action steps for state and district leaders to adapt as they implement the standards in their schools. Meanwhile, the two consortia ­designing online student assessments that align with Common Core have developed guidance of their own on the minimum technology requirements that states must achieve to effectively support online testing:

Tempers flare at 1st Common Core hearing as legislators clash with Flanagan, each other LANSING — Rep. Tim Kelly had to play traffic cop at times Tuesday as legislators from both sides of the aisle peppered State Superintendent Mike Flanagan and Michigan Department of Education officials with questions about the Common Core State Standards. The fireworks came during a subcommittee hearing on whether or not the legislators should give their seal of approval to continuing implementation of Common Core, one of four such hearings scheduled for the summer. The hearings came about after legislators inserted a provision in the new state budget, set to take effect Oct. 1, that blocks the education department from spending state funds to implement the standards. RELATED: What is Common Core? Flanagan began his testimony before the panel by asking legislators to take action as soon as possible, so teachers working on lesson plans and other preparation for the fall have certainty about curriculum standards. Rep. “They did not have public hearings,” McMillin said.

Common Core Online Testing Methods Seriously FlawedCapitol Hill Daily It’s no secret that today’s kids are more tech-savvy than ever. Like many kids, my nephew knew how to use an iPhone before he could even walk. Now, at just four years old, he’s handier with an iPad than many adults. However, despite the fact that our society revolves around technology, parents and teachers are worried that their students lack the computer skills necessary to take the new Common Core assessments. As states begin implementing the Common Core State Standards, students around the nation will be required to complete the Partnership for Assessment of Readiness for College and Career (PARCC) standardized test. And now that PARCC’s testing practices have come to light, people have even more reason to question the assessment. Additionally, students in fourth grade – some as young as nine – will be required to type a full page on the writing section of the test, and students in fifth grade will have to type two full pages. In pursuit of the truth, Johnnie-Ann Campbell