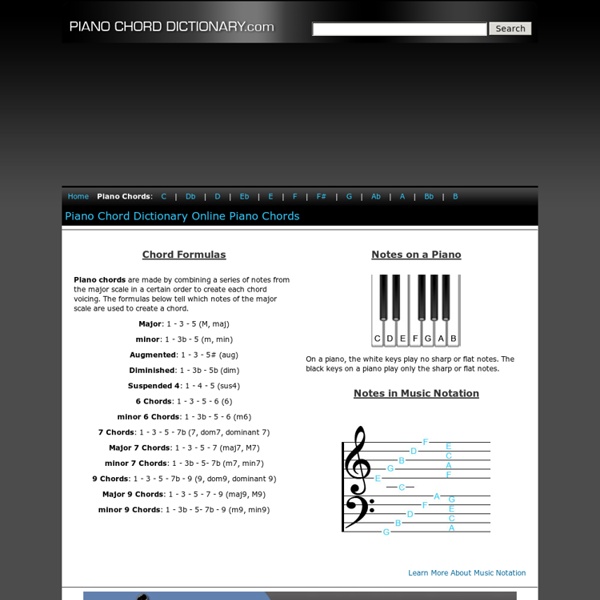 21 Cool 3 Notes-Per-String Exercises to Rock On! Photo by Jsome1 Playing 3 notes per string exercises is something I do on a regular basis. I use them to warm up, to become a faster guitar player and to spice up my improvisation. 3 notes per string licks and scales are generally used for speed picking. If you practice these exercises properly and often enough you will increase your speed. The 3 notes per string exercises are played using the alternate picking technique. Once you get the hang of it, it can become quite addictive, but be careful though. The one and only reason why these monster guitar players become so incredibly fast is that they practice long hours for days, weeks, months and years.

200 useful chord phrases in C major We've spent two full months of this blog exploring the basics of chord writing in rock music so you can create your own chord progressions (or chord phrases, as I like to call them). Personally, I love this stuff! There are so many hidden symmetries to discover, so many subtle relationships between notes that you can play with. But... All right, then. Wherever you need a phrase of music, just drop in one of these chord phrases. By the way, these chord phrases are not random; they're in a sort of functional order. Theoretically Correct: Chord Finder, Song Transposer, Chord Transposer, Free Online Music Theory and Music Lessons

Lyric Writing Exercises: a 5-Day Workshop Guest post by Maria Rainier If you’re anything like most songwriters, you’re all too familiar with that frustrating sensation of being stuck in a rut. You know it’s important to write something – anything – every day, but there are times when that just seems impossible. Maybe you don’t have enough energy, you might be too critical of your first attempts, or you could be missing out on the muse. Whatever the reason, you can still get your daily writing done in a productive way if you introduce new exercises into your routine. The next chance you get, try starting this five-day lyric writing exercise workshop – it’s the perfect way to begin a week of successful songwriting. Day 1: Research Mix & Match The first step is to give yourself something interesting to work with. Day 2: Collaborative Brainstorming Contact a friend by chat or email. Day 3: Titles & Nuggets Using what you’ve written from the previous two exercises (or relying on your notebook), construct some potential song titles.

Gooload find MP3 files with intitle index of and parent directory Drum Tuning Tips From The Famous Drum Doctor If you’re doing a session in Los Angeles and you want your drums to instantly sound great, then your first call is to the Drum Doctors to either rent a fantastic sounding kit, or have your kit tuned. Ross Garfield is the “Drum Doctor” and you’ve heard his drum sounds on platinum recordings from Bruce Springsteen, Rod Stewart, Metallica, Dwight Yokum, Red Hot Chili Peppers, Foo Fighters, Lenny Kravitiz, Michael Jackson and many, many more. Ross was kind enough to sit down for an interview when I wrote The Recording Engineer’s Handbook, but I’ve featured some of his tips in other books as well including The Drum Recording Handbook, The Touring Musician’s Handbook, and The Music Producer’s Handbook. So, I like to think his tips are worth sharing! Here are a few of his quick drum tuning tips, which can be lifesavers if you’re new to tuning drums. Hopefully these tips are useful to you in your next session!

♫ Tony-b Machine ♫ Scales and emotions See also a post about making chords from scales. So maybe you want to write a song or an instrumental in a particular mood or style, and you’re feeling overwhelmed by all the scales. Here’s a handy guide to the commonly used scales in Western pop, rock, jazz, blues and so on. Click each image to play the scale right in your browser with the aQWERTYon. These scales have a major third (E in the key of C), which makes them feel happy or bright. Major scale Happy; can be majestic or sentimental when slow. Mixolydian mode Bluesy, rock; can also be exotic/modal. Lydian mode Ethereal, dreamy, futuristic. Lydian dominant mode Also known as the overtone scale or acoustic scale, because it is close to the first seven pitches in the natural overtone series. Phrygian dominant mode Exotic, Middle Eastern, Jewish. Harmonic major scale Majestic, mysterious. These scales have a flat third (E-flat in the key of C), which gives them a darker and more tragic feel. Natural minor scale (Aeolian mode) Dorian mode

Make acoustic panels for your recording studio or home theater Acoustic treatments are often used to help improve the acoustics of a room by taming "flutter echoes," "room modes," and other problems which arise from a room's dimensions and construction. Although a variety of treatments are available for commercial use, they tend to be quite expensive. After some research both online and in print, we came across several sources for DIY acoustic treatments using rigid fiberglass panels and simple frames. These are often referred to as "bass traps," although the ones that we're focusing on have a fairly wide rage of absorption. While commercial versions are available for almost $100, we were able to make these panels for about $24 each. We can not take credit for this design, but have combined several people's ideas into a step-by-step guide. For more information, check out the good folks in the acoustics forum at recording.org