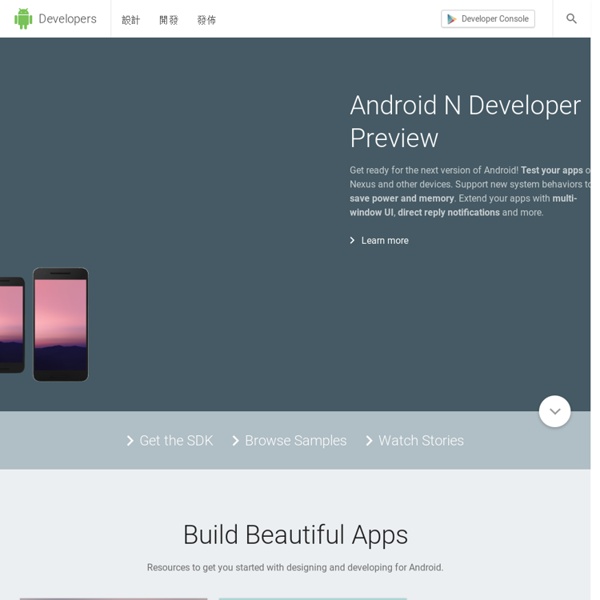 Free, open-source framework The Adobe USA site has been optimized for users within the United States. If you live outside the U.S., we recommend that you visit your local site for the most relevant information, including pricing, promotions, and local events. United States Canada - English Free textures for your next web project. The seigaiha or wave is a pattern of layered concentric circles creating arches, symbolic of waves or water and representing surges of good luck. Made by Olga Libby Download A friend gave me a cork wallet. I scanned it and made this.

Design Principles These design principles were developed by and for the Android User Experience Team to keep users' best interests in mind. For Android developers and designers, they continue to underlie the more detailed design guidelines for different types of devices. Consider these principles as you apply your own creativity and design thinking. Deviate with purpose. Enchant Me Delight me in surprising ways What is Android? Android powers hundreds of millions of mobile devices in more than 190 countries around the world. It's the largest installed base of any mobile platform and growing fast—every day another million users power up their Android devices for the first time and start looking for apps, games, and other digital content. Android gives you a world-class platform for creating apps and games for Android users everywhere, as well as an open marketplace for distributing to them instantly. Android growth in device activations Global partnerships and large installed base

Heritrix - Heritrix - IA Webteam Confluence This is the public wiki for the Heritrix archival crawler project. Heritrix is the Internet Archive's open-source, extensible, web-scale, archival-quality web crawler project. Heritrix (sometimes spelled heretrix, or misspelled or mis-said as heratrix/heritix/ heretix/heratix) is an archaic word for heiress (woman who inherits). Since our crawler seeks to collect and preserve the digital artifacts of our culture for the benefit of future researchers and generations, this name seemed apt. All topical contributions to this wiki (corrections, proposals for new features, new FAQ items, etc.) are welcome!

iPhone Emulator for Windows Web Image MobiOne Studio Build cross-platformmobile apps in minutes more details Tiny Circleslider: A lightweight circular carousel for jQuery What is it? Tinycircleslider is a circular slider / carousel. That was built to provide webdevelopers with a cool but subtle alternative to all those standard carousels. Tiny Circleslider can blend in on any wepage. Creative Vision We focused the design of Android around three overarching goals, which apply to our core apps as well as the system at large. As you design apps to work with Android, consider these goals: Enchant me, Simplify my life, and Make me amazing Enchant me Beauty is more than skin deep. Android apps are sleek and aesthetically pleasing on multiple levels. Android (operating system) Android is an operating system based on the Linux kernel,[12] and designed primarily for touchscreen mobile devices such as smartphones and tablet computers. Initially developed by Android, Inc., which Google backed financially and later bought in 2005,[13] Android was unveiled in 2007 along with the founding of the Open Handset Alliance—​a consortium of hardware, software, and telecommunication companies devoted to advancing open standards for mobile devices.[14] The first publicly available smartphone running Android, the HTC Dream, was released on October 22, 2008.[15] The user interface of Android is based on direct manipulation, using touch inputs that loosely correspond to real-world actions, like swiping, tapping, pinching, and reverse pinching to manipulate on-screen objects. History Features